You can use apps that guard your phone’s battery use, or set your phone to thrift mode, or activate airplane mode, or kill apps in the background.

Or you can get a power bank. This one.

You don’t want a big, squarish, bulky, heavy, ugly-looking, power bank, believe me. But you do want something that can at least charge your phone or tablet twice. Also, it wouldn’t hurt for that ideal power bank to slide easily into pockets – in your jacket, you bag’s side pouch, or in your pants’ back pocket.

All these plus a cool color selection is what the Ekopak 13000 mAh Power Bank (Green) is about. You can definitely walk around clutching it and your phone, which is the norm, because this power bank isn’t gargantuan. One edge is curved and the sides are textured for comfy holding. And it has two USB ports for shared simultaneous charging – 2.1A and 1.2A.

13,000 mAh is slightly above most power banks I see with other tech bloggers, who often lug around 10,400 mAh ones. Thing is if you’re going to rely on a pocketable power bank for long trips, or in my case, for multiple event coverages, you can’t afford to run out of juice. Remember that power banks need charging, too, and this one won’t run out of juice immediately. Even if my LG G3 is power hungry on its own, and my wife now and again needs to juice up her Huawei Honor 6 and Rapoo S500 Headphones (see below). 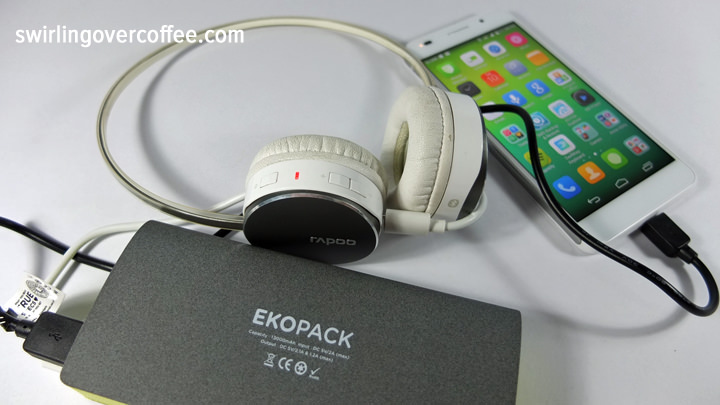 I love the minimalist design – nothing fancy, curves into your hand, self-contained look, easy to hold and to stash and to bring out. I like the green one. But there are two more colors, black and pink, to suit your fancy. The Ekotek 13000 mAh Power Bank sells for P1,949.00 at Lazada.com.ph. 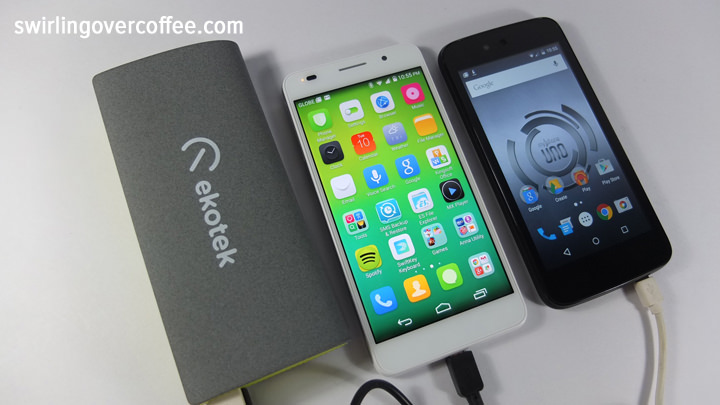 The Huawei Honor 6 and not so power hungry budget phone, the MyPhone Uno, being charged at the same time. Buy it. It’s good. Right now, this is my new favorite go-to power bank. My LG G3 (above) and I can’t be happier. You can check out the Ekopak 13000 mAh Power Bank (Green) via the links below:

The Galaxy E Series: A top-notch Large Screen Experience From a Mid-Range Phone