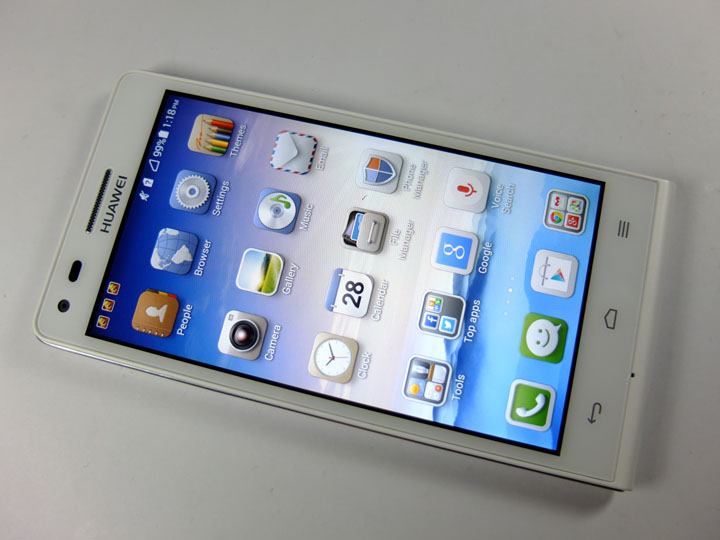 The Huawei Ascend G6 is pitched as the “mini” of Huawei’s 2013 flagship, the Ascend P6, which we loved. At the time of launch, the G6’s package of specs, features, and price was aimed at the midrange market. Let’s go over some features before we hit the Good, the Bad, and the Verdict. 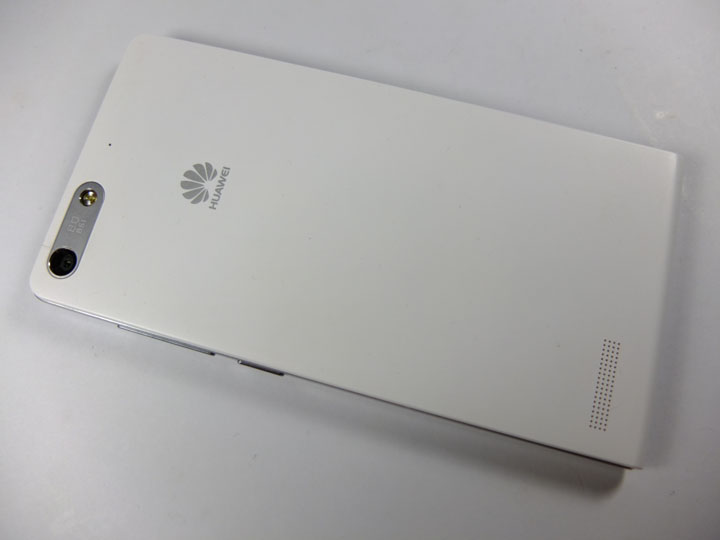 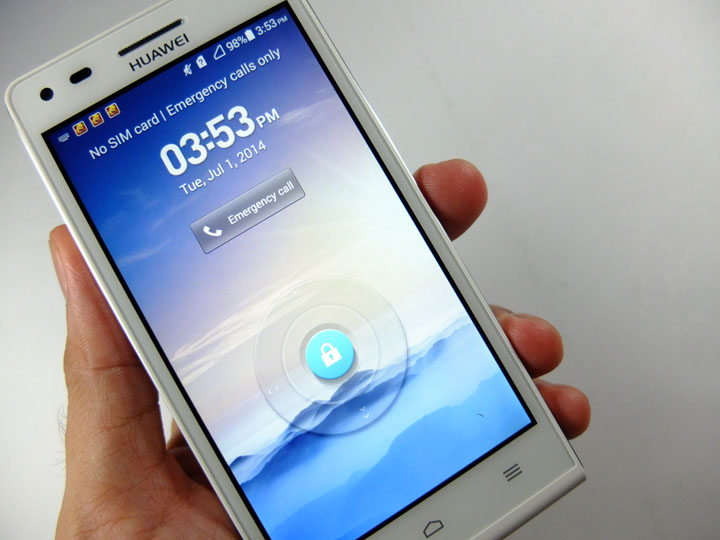 An overlooked aspect of smartphones is whether they fit right and feel good in your hand, an aspect where the Ascend G6 shines. With a 4.5″ display, it’s nowhere near the girth of the now “standard” 5 inchers, or even the 5.5″ and above phablets. My wife has small hands and she loves the feel of the G6 and how “aggressively” it can detect and connect to WiFi networks. Three rooms away from our router and she can still make and take Skype calls. 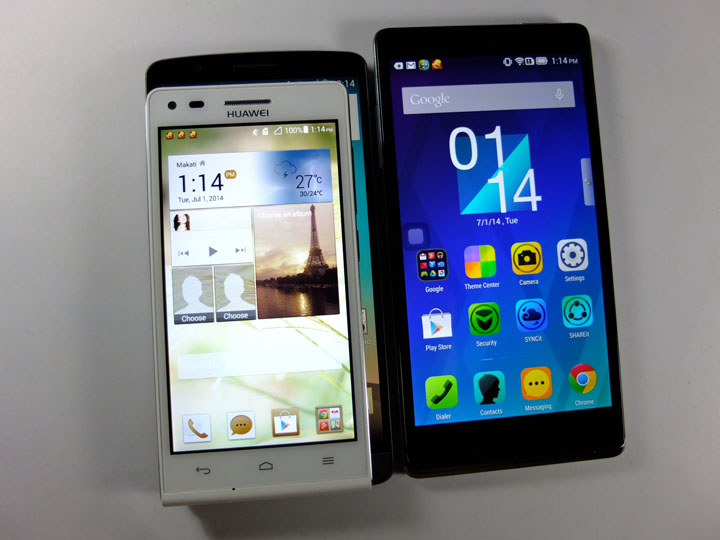 Just to give your a visual on how smallish the Ascend G6 is. Underneath the white G6 above is the 5.2″ LG G2. The long phablet beside it is the 5.5″ Lenovo Vibe Z. Sometimes I “step back” and fail to understand how we got used to lugging around these large monsters. In particular, me, with my G2. Anyway… 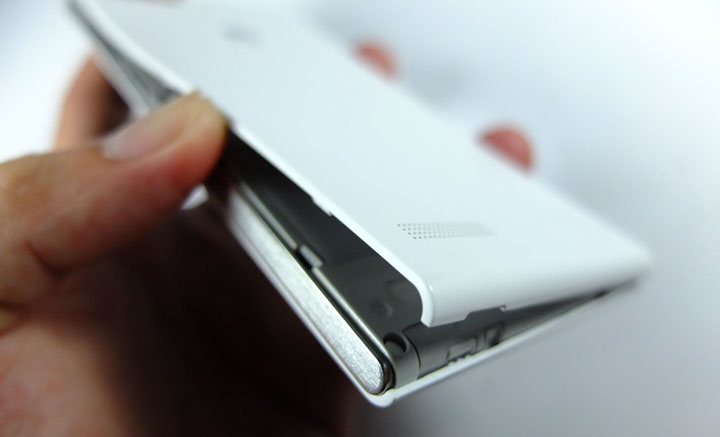 You get an impression, from this angled shot, at how sturdy the Ascend G6 looks – metal sides wrapped in sturdy plastic. The rear plate can be removed easily without fear of ruining the plate. The speaker – see those tiny holes – are adequately loud, loud enough to share a cat video or movie trailer with your MRT seat mate. 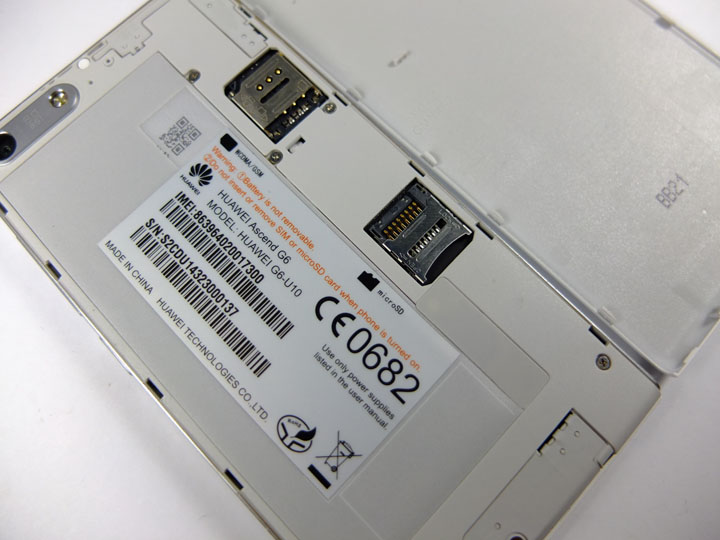 Here’s what’s probably behind the solid feel of the G6 – it’s all tightly packed. 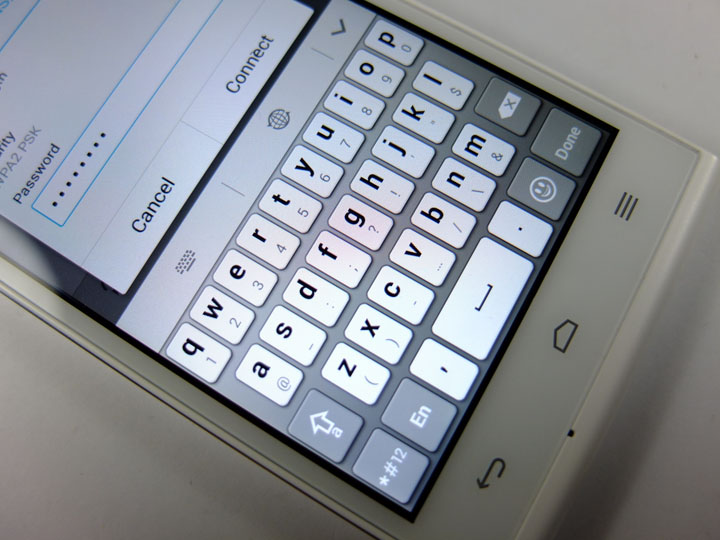 One of the things I love about Huawei phones – the keyboard. (I first encountered this with the Ascend P6.) First, there’s a clear visual hierarchy: the letters are presented with thicker “strokes” while the less visible ones, the numbers and symbols, come to your attention in a secondary manner: in thinner, grayed out lines. Second, you can, with a tap of the upper left key (the keyboard icon), change from Qwerty to number pad, and back. 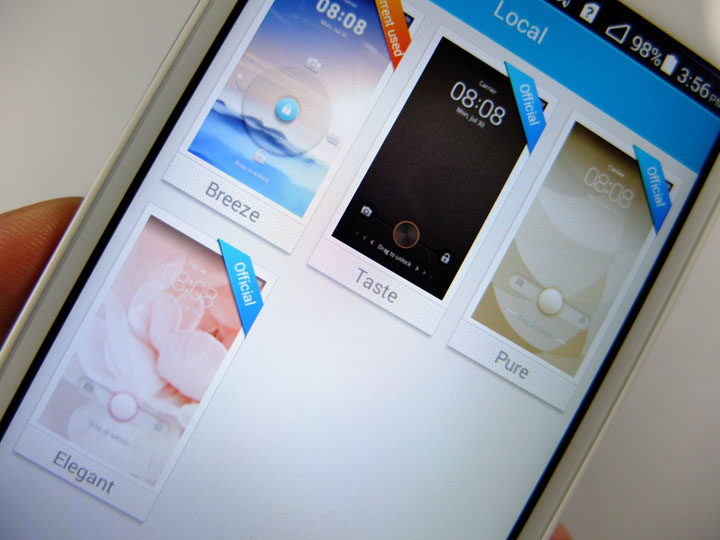 Themes, each with its own unique feel, color scheme, and icon design. 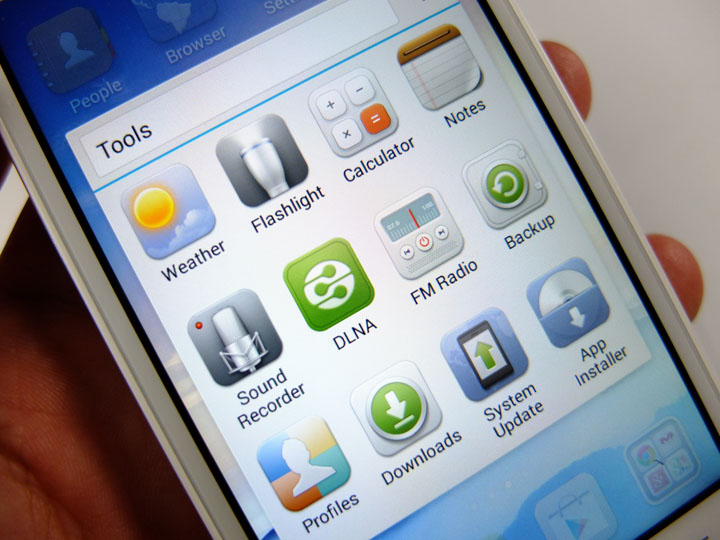 This theme, for example, sports icons that, in tandem with its clean, bluish tone, comes off as calming. Small touches. We don’t all want flat design. 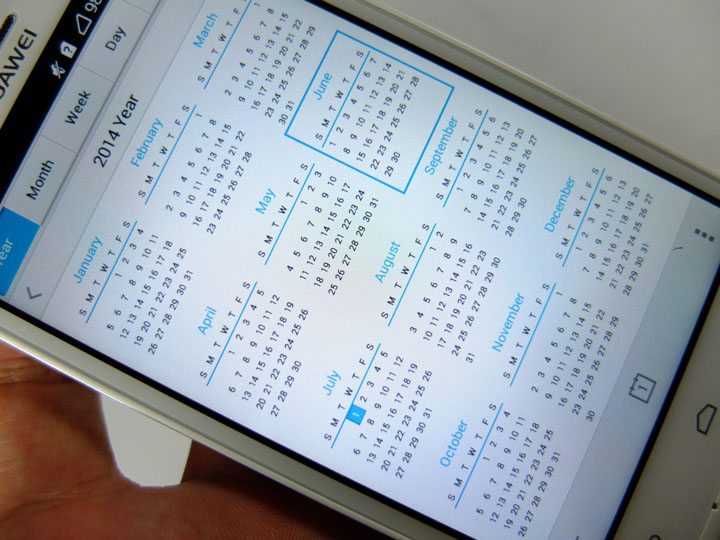 Speaking of small touches. The stock calendar app is good. Nothing fancy or overly transition-animated, but clean and utilitarian. 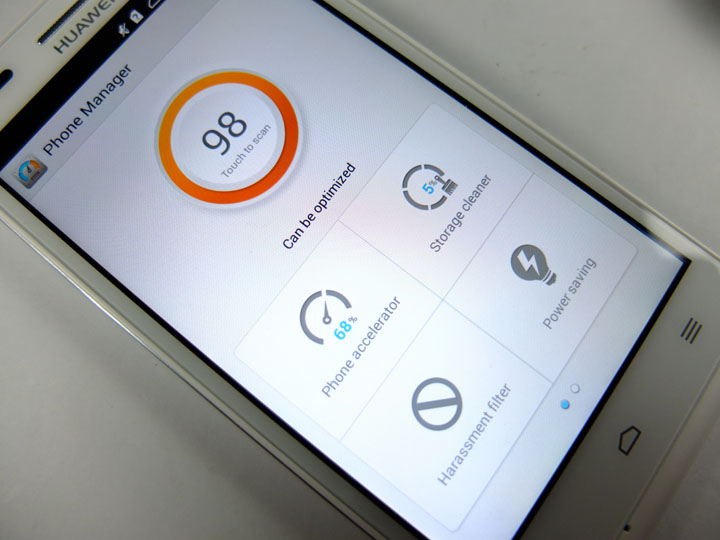 While we’re on the utilitarian topic, the stock Phone Manager is a comes-with Clean Master app. Boost your phone’s performance by clearing cache and uninstalling unused apps and files, save power by choosing a usage profiles, and block unwanted spammers, callers, and ex-lovers with Harassment filter. 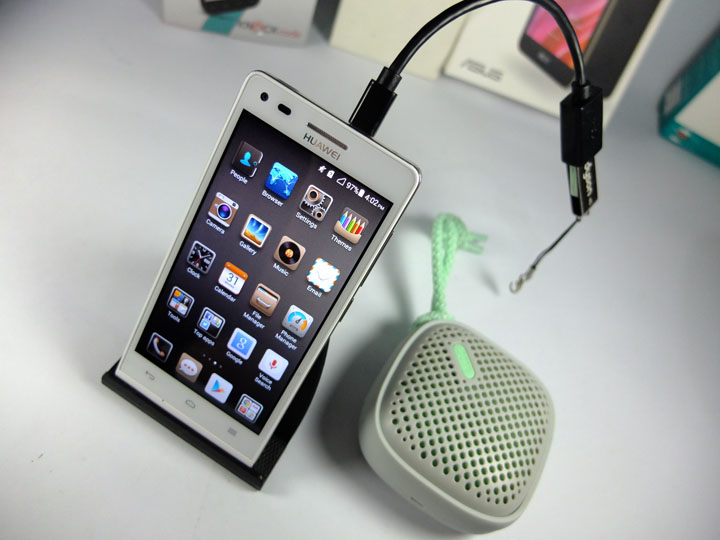 The micro USB charging port is found on top of the Ascend G6, shown here with a connected and dangling USB OTG cable, with a USB flashdrive plugged in. Beside the G6 is the Nude Audio S bluetooth speaker (forthcoming review). 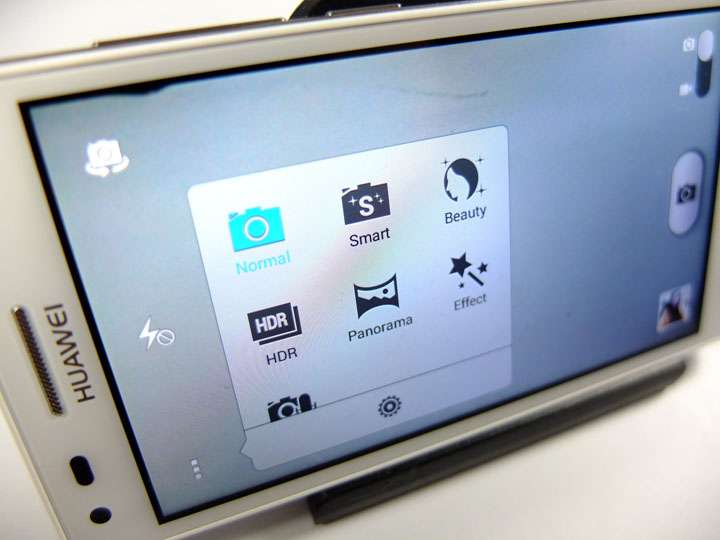 Not the most sophisticated or power-user-oriented camera UI, but it works. Now let’s look at some sample shots taken with the Ascend G6’s rear and front camera.

A capable, solidly built, mid-range spec’d phone, with a good enough battery life, an intuitive and thought-out Emotion UI with good theming options, plus an overly capable front camera (in keeping with being a P6 “mini” selfie phone) – that’s the Huawei Ascend G6.

At launch, the Ascend G6 had good specs for its P10k price range, the same price range the Xiaomi Mi 3 now belongs to, despite the Mi 3’s above-midrange specs (the same specs as the LG G2). The ASUS ZenFone 5 16GB variant, at P7k, runs on a dual core processor that rivals quad cores, plus its Pixel Master tech on its rear camera allows low light shooting on par with the LG G2 and iPhone 5s. In the local scene, the Cherry Mobile Pulse is a P6.5k dual SIM phone running on an octa-core processor with a 13MP rear and 5MP front camera. Crazy.

But the G6 does has a few traits neither the Mi 3 nor the Cherry Mobile Pulse have: a more drop-friendly and feels-good-in-your-hand build, and an absurdly consistent and good front camera.

But price is always a tipping point for buyers on a budget, and recent phones are changing what features we should expect for midrange prices.

Xiaomi, Maybelline, and The SM Store Named The Most Popular Brands on Shopee Philippines in 2018

After-sales service at its best: Getting your Huawei devices repaired is now a phone call away