Shorter than the 5.5″ iPhone 6 Plus is the 6″ and more affordable Huawei Ascend Mate 7. Despite its massive size, the mix of sturdy metallic heft and a solid-in-your-hand feel make for a phablet that’s comfy to hold: the Mate 7 neither bends nor creaks. Here are seven reasons to seriously consider buying it. 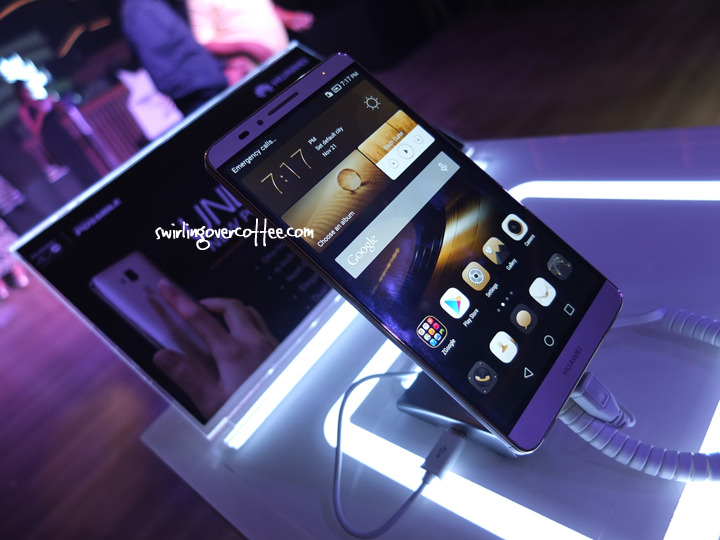 Because of its display size, Mate 7 competes with QHD phones (like the Note 4 and the LG G3) but it has no reason to feel insecure. Not a lot of people can tell the difference between Full HD and QHD anyway. Look at the gorgeous “only” Full HD screen – you will lose yourself staring at the thematically consistent and mature Emotion UI overlay, and the crisp details of pictures and videos and graphic-heavy games. While some people are getting tired of lugging around both a phone and an iPad Mini, here’s a good compromise – a long battery life phablet that’s just right your hand for video marathons and games.

Check out our Unboxing of the Mate 7. 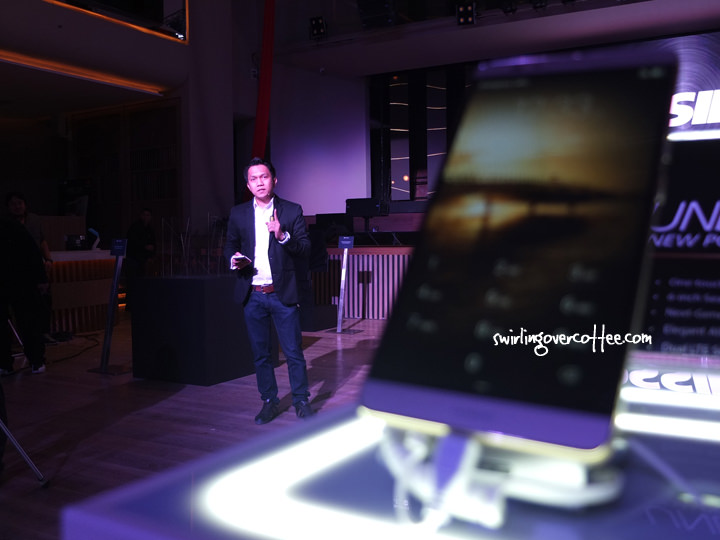 Al Dimapilis, Huawei Philippines Marketing Manager, walks the audience through the key features of the Mate 7.

Predominantly plasticky phablets whose makers paid no attention to heft and weight and tactile feel are put to shame by the Mate 7. Yes, it’s massive, but the metal body feels secure in your hand. Yes it’s not as plasticky light as others, but it’s not likely to slide off your hands when in use. Nothing about the Mate 7 feels cheap. 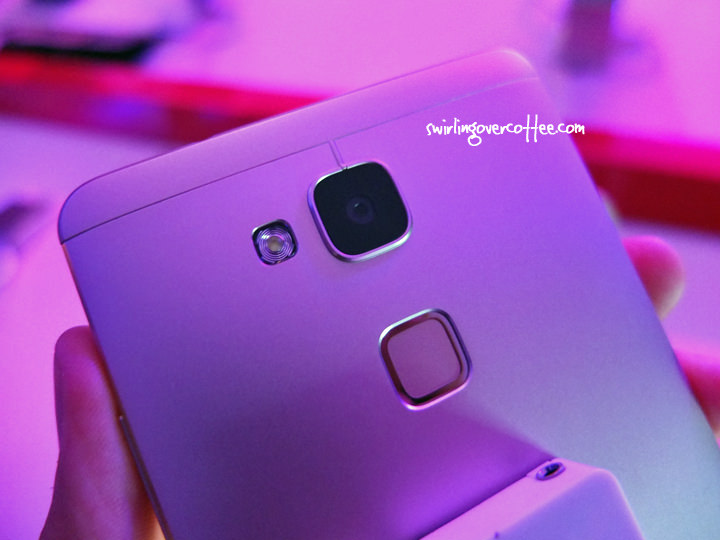 The rear fingerprint scanner of the Mate 7 saves you times when unlocking your phone. Once you use it, going back to non-fingerprint ways of phone unlocking starts to feel like a time-waster.

Unlocking phones via pattern swipes, number sequences, or facial recognition actually takes time. What doesn’t is a simple one-touch fingerprint recognition mechanism placed where your index finds itself when holding a phone – at the back and under the rear camera. No more knock codes. The Mate 7 is smart enough to know the hand of its owner. That means no more awkward moments when your friend, family, or fiance finds private stuff on your phone.

Apart from being able to use two LTE SIMs from two different telcos simultaneously, the Mate 7’s second SIM tray also doubles as a microSD card slot, for storage expansion. No, you can’t slide in two LTE SIMs AND a microSD, but then the 32GB internal storage is hefty enough, for most people. 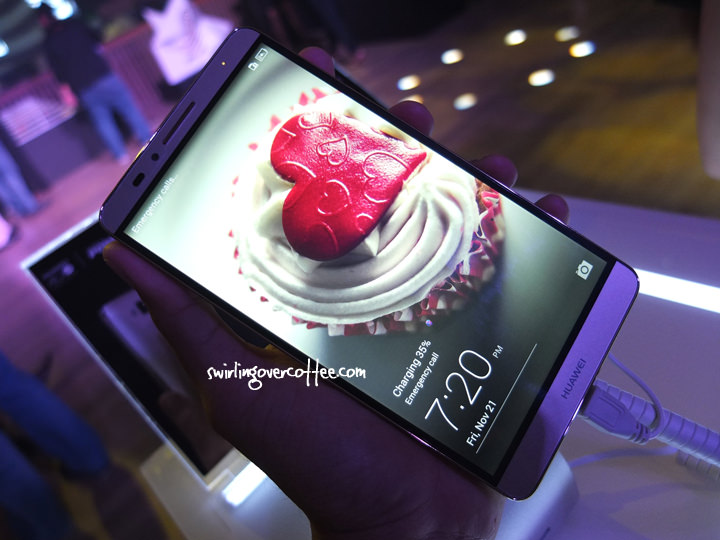 Every time you unlock the Mate 7, a new gorgeous lock screen wallpaper greets you. Imagine movie doing marathons and games on this baby.

Large 4,100 mAh battery means longer up time and can even charge other mobile devices

It’s actually a good thing that the Mate 7’s display is “only” Full HD – it’s less power-hungry. So what to do with that massive battery? The Mate 7 comes with a small micro USB to micro USB cable for charging other phones, phablets, tablets, and even a power bank. The Mate 7 itself is a walking power bank. Feel free to charge for your services. Lastly, the Mate 7’s power management feature lets you extend battery life by showing you which apps eat up more power and which apps stay on when you turn off the display.

This is something I’ve taken for granted with Huawei phones I’ve reviewed – two to three rooms away and I still have WiFi; I take a meeting at the basement of some tucked-away cafe and yet calls and SMS still push through. When it matters, you can be reached, and you can reach out. 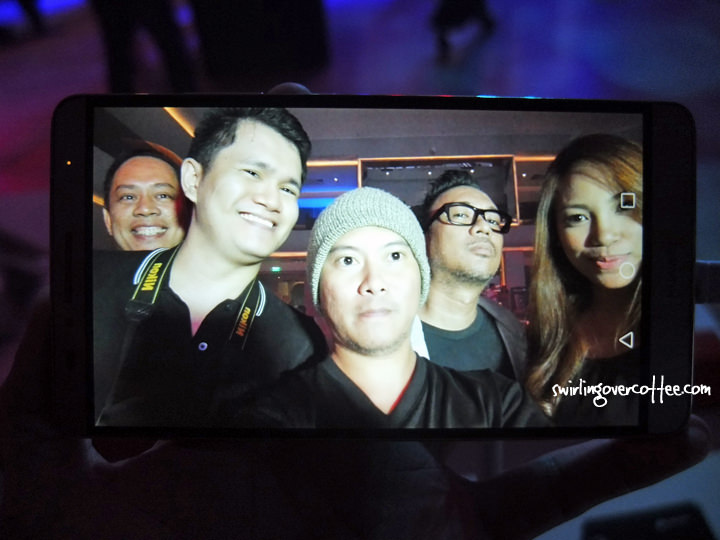 Just so you know, we were directly in the path of a moving spot light – so this image should be overexposed. But the Mate 7 immediately did its magic. Left to right are Bam Amor, JM Balicano, me, Enzo Luna, and a Huawei model.

The advertised selfie aspect of the Ascend P6 and P7 and G6 phones finds its way into the Mate 7 – its massive display plus panoramic selfie feature means you can squeeze in more people into the frame. The lovely display means instant gratification at showing off selfies – which you can tweak via the selfie cam app: shave off your chin, get a smaller nose, enlarge your eyes, take on whiter teeth, instantly have a smoother complexion, post that “you” on Facebook. Your ex will forever hate him/herself for leaving you. In addition, the Mate 7 also has the 1.2 second Ultra Snap Shot feature – double click on the volume down key while the phone’s screen is asleep, to take a quick snap shot using the rear camera. 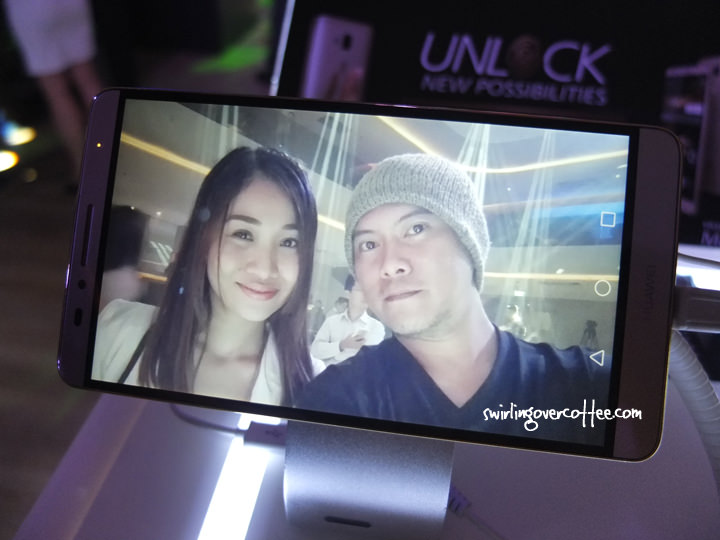 Beside me here is Jaja Ramirez and, maybe, we might not need the Mate 7’s beauty shot feature. But it’s good to know it’s there.

That means all the movies and season after season of your fave shows in your external drives – or those owned by friends – are now watchable, even without a computer near by. All your hear again and again and feel good music and all the old pictures you’ve been planning to upload as #throwbackthursday posts – now there’s nothing stopping you.

The Huawei Ascend Mate 7 sells for an SRP of P27,890.00. You can check out our unboxing and first impressions here. Stay tuned for the full review.

Beyond the Box Launches the New iPhone on November 16 Midnight