Don’t miss the chance to get your favourite LG handsets with freebies and slashed off prices for a limited time only.

According to LG Mobile Vice President Jay Won, “2015 has been a good year not just for our flagship models, but the reception of our mid-range phones by the local market has been strong.”

Starting last year, LG started rolling out features that are originally reserved for its more premium handhelds. But now, features such as Rear-Key navigation, Knock Code, Gesture Shot, and Selfie Flash can be found in LG’s mid-range series. LG makes sure that consumers can experience premium features even on a mid-range smartphones, striking a balance on exceptional design, performance, and affordability.

LG Max, the newest of the bunch, features a broad 5-inch display screen with a 5-megapixel rear shooter and 2-megapixel front camera. The LG Max is remarkably powered with a Quad-core chipset with up to 1.3GHz in speed performance to match your daily needs. For a limited time only, consumers can get the LG Max at Php 5,990 with a FREE LG phone, the LG B220, valued at Php 799.

LG Leon is a 1.3Ghz Quad-core smartphone in a compact 4.5-inch in-cell touch display with a premium-looking body. The LG Leon sports an 8-megapixel rear camera with a Touch & Shoot function that lets you instantly snap photos with one touch on any part of the screen. LG lets you save Php 1,000 with LG Leon priced at Php 4,990 for a limited time only.

LG Magna works with 1.3Ghz Quad-core chipset and also features an 8-megapixel rear camera with a 5-megapixel front camera. LG has been playing with curved aesthetics which resonate from their TV displays and flagship smartphone models. Now on a mid-range phone, the gentle curve of the Magna has the capability to absorb shock, making it less breakable than most mid-range phones. With an SRP of Php 7,990, the sleek and curved LG Magna comes with a free 16GB SD card valued at Php 700.

Last but not the least, the LG G4 Beat LTE completed the G4 family for 2015. Inheriting the aesthetic features of the LG G4, the G4 Beat makes an entrance with its 5.2-inch full HD screen with a slightly curved body for perfect grip. Apart from the design and build, the manual mode feature of the LG G4 is also being carried over to its youngest kin. With an 8-megapixel rear shooter, users can also manually adjust settings such as white balance, exposure and aperture levels, shutter speed, and ISO levels. From Php 12,990, get this remarkable handset for only Php 11,990 that comes with a free 32GB SD card valued at Php 1,000.

“We are excited to see what the year brings for us and this is our way of saying thanks to our loyal and new customers for an eventful year ahead in mobile,” says Jay Won. 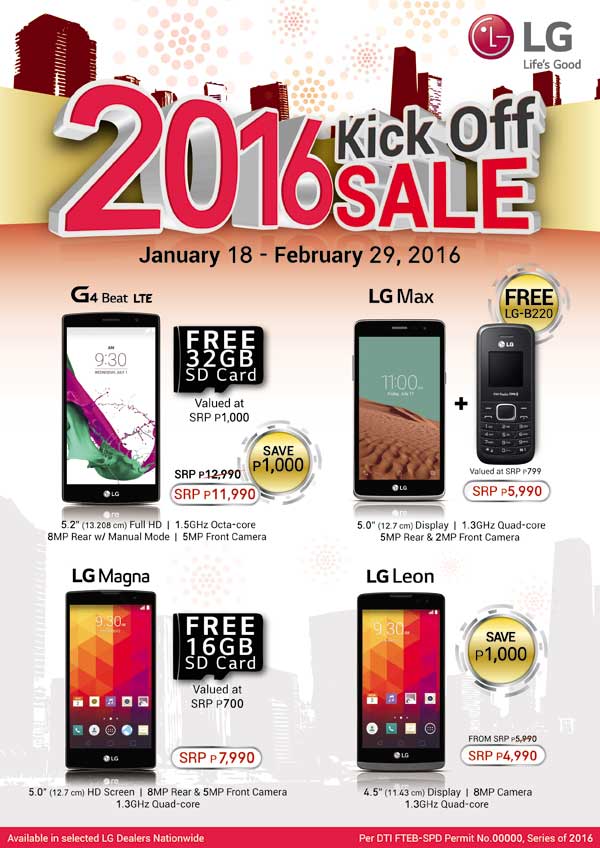 What delicious, satisfying meal can you enjoy for P50 or less?

PACK-UP: Seven travel must-haves you can’t do without

Savor the flavor of matcha at home