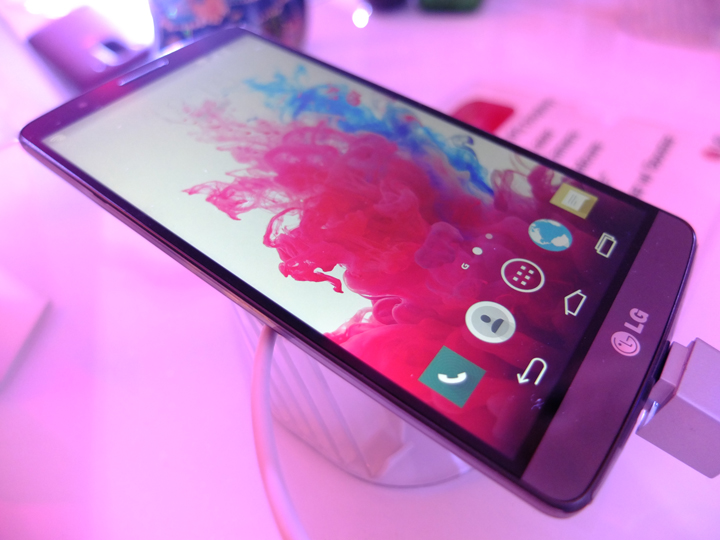 We fawned over the monster specs, advised you to pre-order, showed you the camera features, and even rushed a quick review. Now, the LG G3 is officially here. 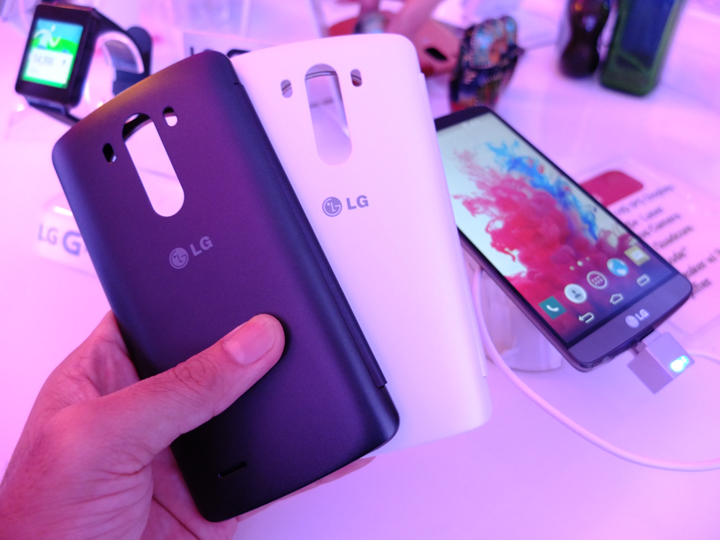 So we’ll just go through some discoveries at the launch, mostly about the accessories and LG’s Android wearable. 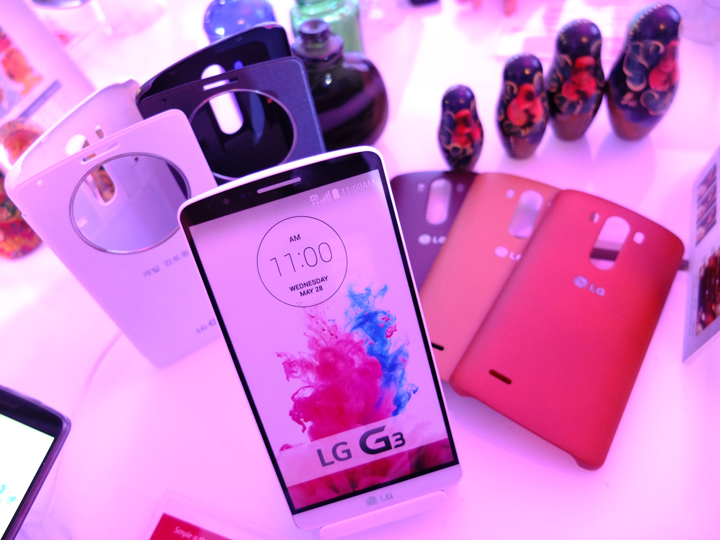 Quick Window case (behind the dummy LG G3 unit), three alternate cases, and though it’s not obvious, the dummy sits on a wireless charger. 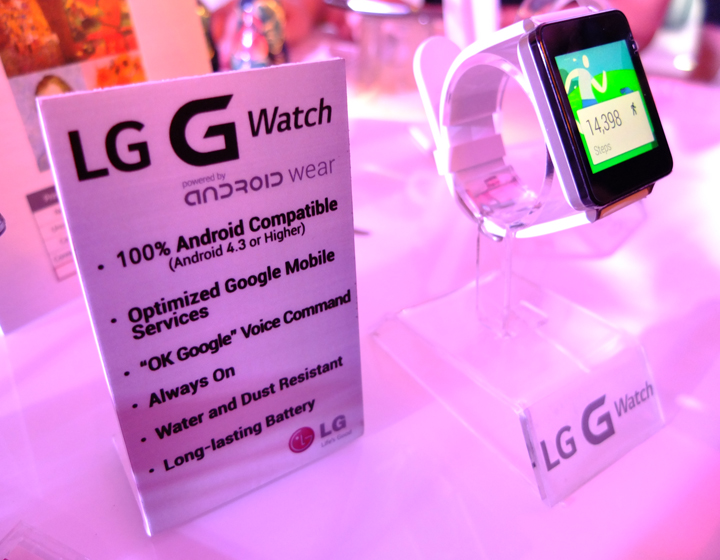 The LG G Watch (above) is not yet officially released and did not have official pricing. Though we’re not exactly fans of wearables, we’re keeping an open mind. 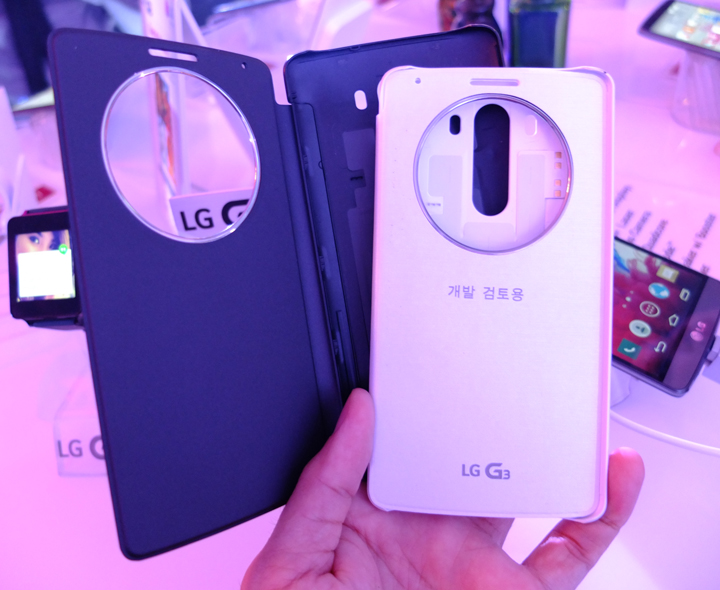 The Quick Window Case (above) is a refinement of the basic flip cover case of the G2, but this time tailored for the G3’s magnetic-cover activated Widget. Of course, as shown below, there’s another use for that hole… 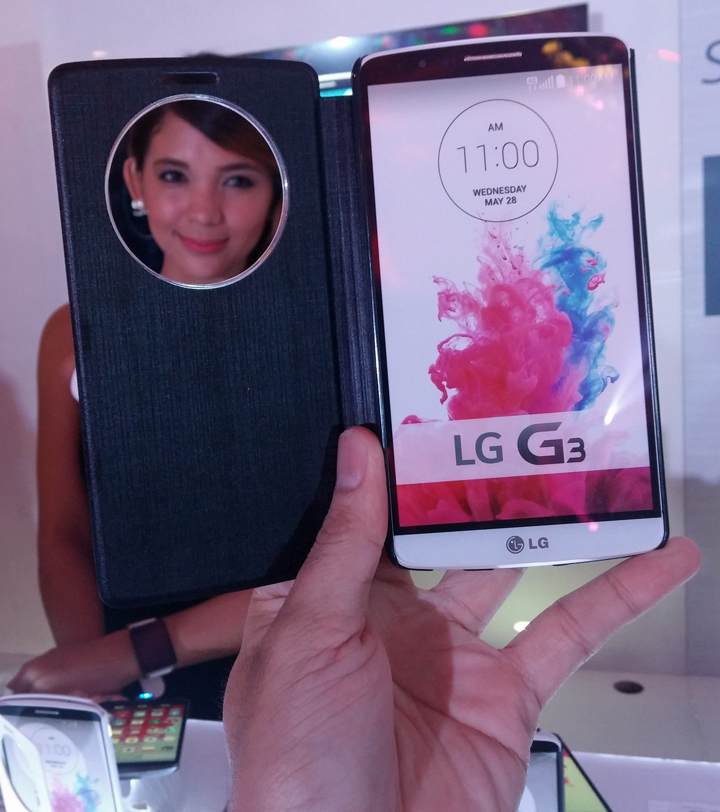 Pretend to be texting and take pictures of your future beloved. 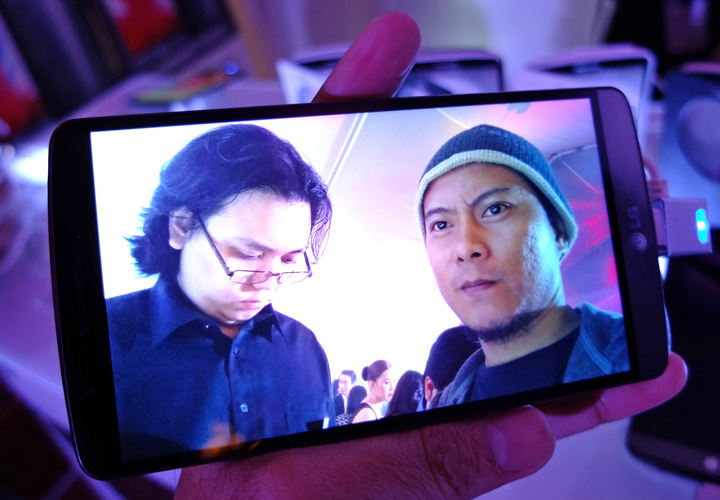 Above is a sample shot made with the LG G3’s front camera. Guy with great hair is Martin Patino and the beanie one is me. What’s not obvious is that this was made in uneven medium to low light indoor settings and AGAINST the light. I had poured over the selfie cam when we checked out the G3’s camera features, so expect more on this in the full review. 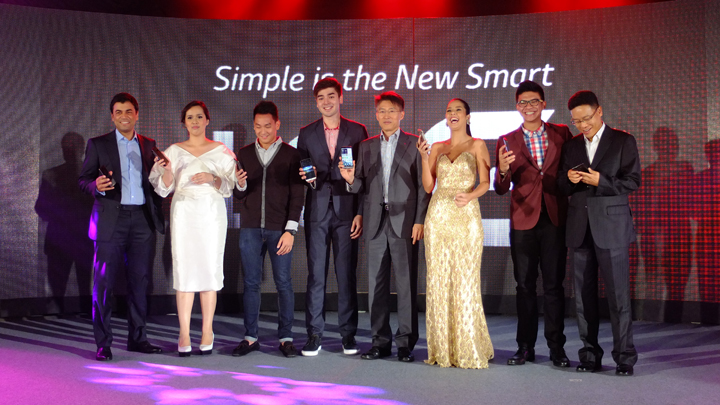 What is a launch-party without the stars? LG Mobile ambassadors Thomas Torres, Andre Paras, Maxene Magalona and Kiefer Ravena graced the LG G3 launch along with some of the biggest names in Philippine entertainment and sports. Also in the photo are (1st from left) Qualcomm Philippines chief Mantosh Malhotra, (5th from left) LG Philippines managing director Sung Woo Nam, and (1st from right) vice president for LG Mobile Lawrence Kim. 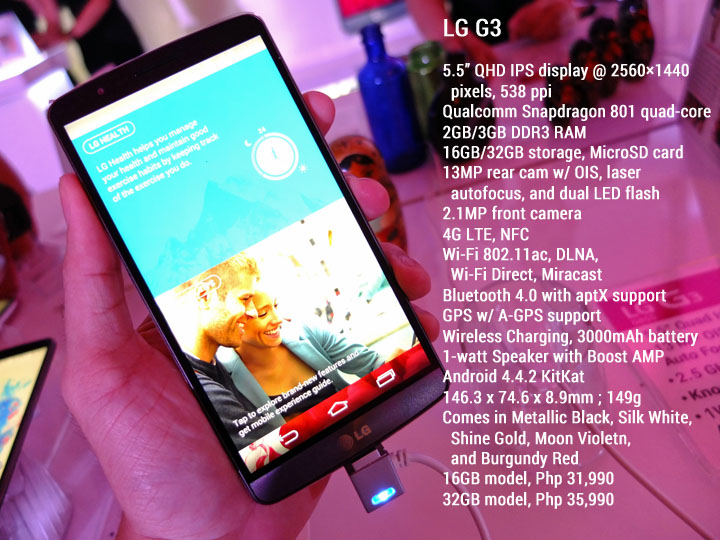 Here’s something I missed on the quick review. LG wasn’t the first to announce a Quad HD display for its flagship. It was Oppo with their Find 7 phone. But LG was the first to make it widely available. If you’re not too keen on updating to the G3, this quick review should give you an idea. 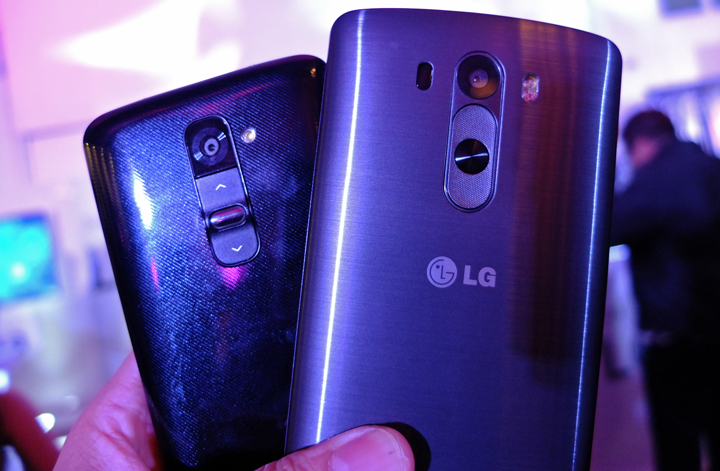 In a blink, my G2 looks outdated. Shiny plastic on the left, “metallic machine” finish on the right. Note also the classy-refined rear keys. 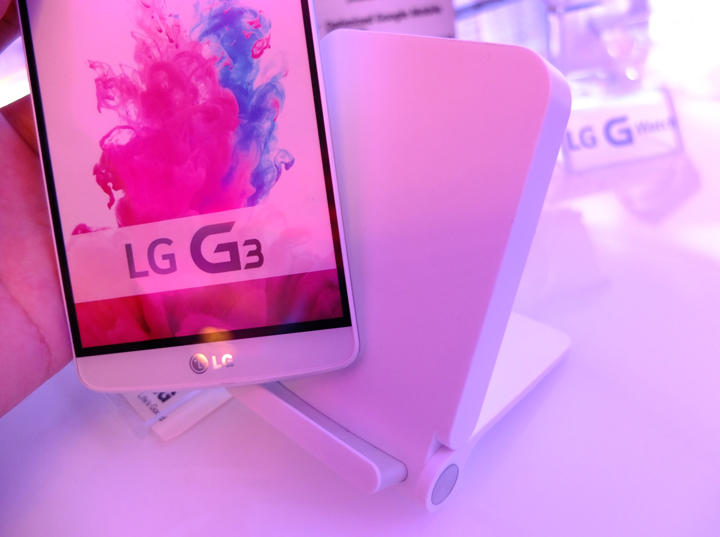 You can also charge the G3 wirelessly (see white charging stand above) without the need for a special cover to allow for wireless charging. Just rest it on an LG wireless charging cradle, which folds into itself for stowing away in your bag.

The wireless charger and the Quick Window Case came free with the LG G3 during the pre-order promo. We just hope the promo continues. 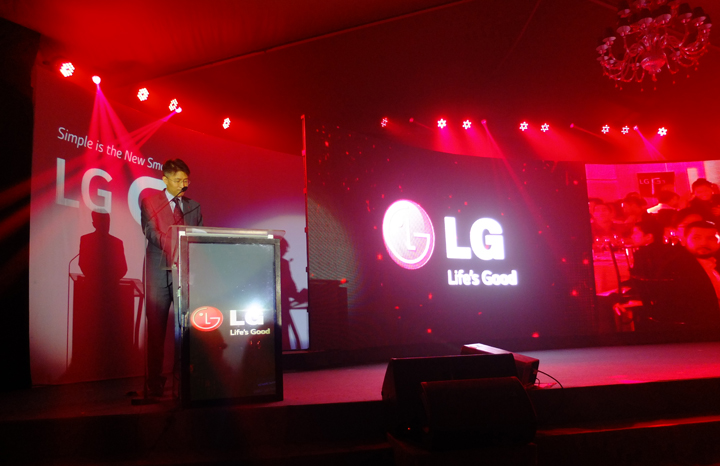 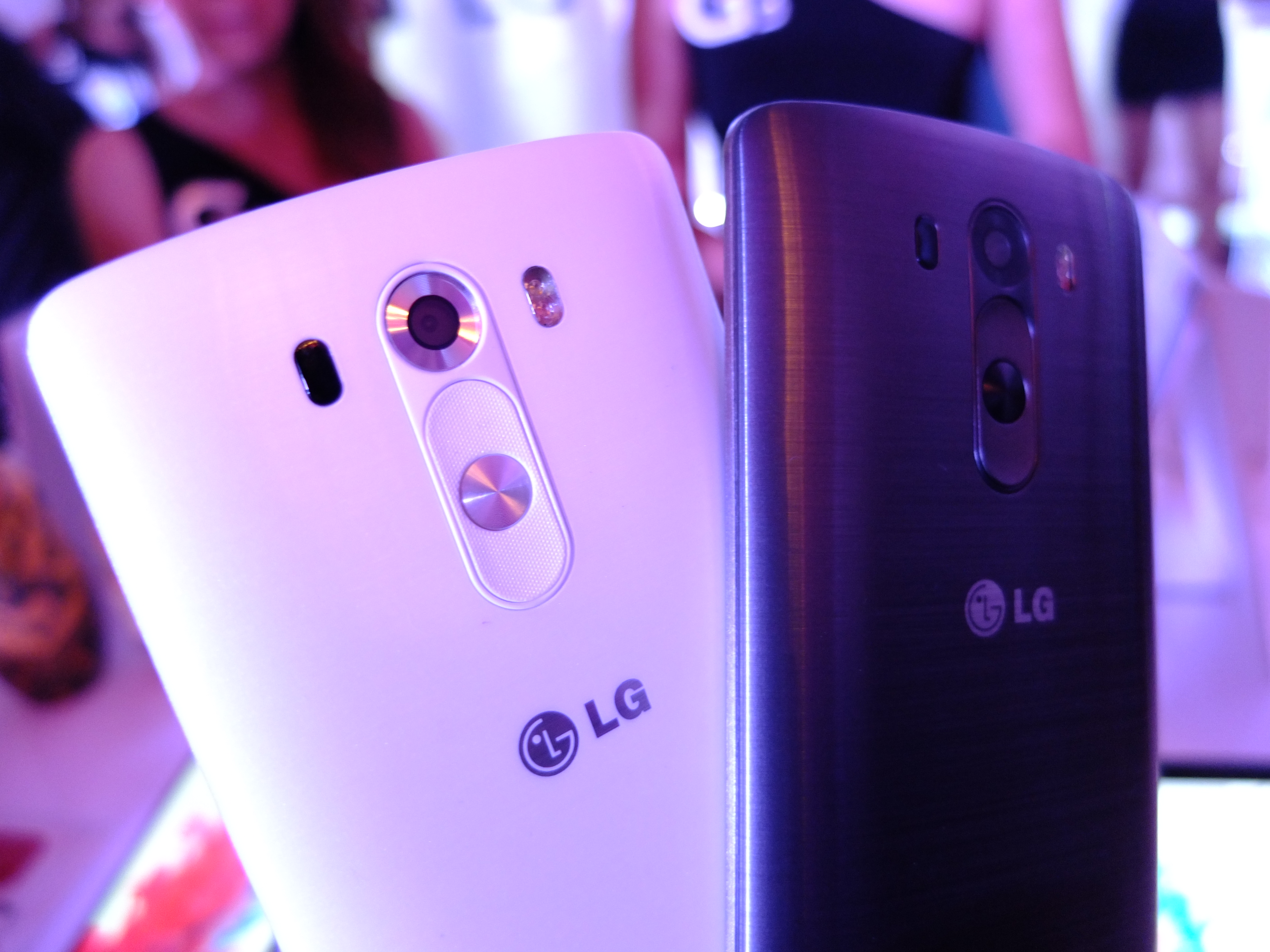 We have more about LG’s Android flagship history here. In the meantime, stay tuned for our full review of the LG G3.

Here’s more about the LG G3:

Epson strengthens commitment to boost innovations on its trusted products

PamaskOPPO: Merrier Christmas with OPPO’s Biggest Treats for Everyone this Season