The Philippines is winning not just in beauty pageants, but also in international energy management solutions contests. One of these is Schneider Electric’s Go Green in the City, where the student representatives have won top honors thrice – Global Champion 2013, Ateneo de Manila University; 2nd runner up Regional Finals 2014, Polytechnic University of the Philippines (PUP); and recently, 2nd Place Global Finals 2015, PUP. Perhaps the country’s winning streak will continue? Schneider Electric challenges students with bright ideas to join the just-launched Go Green in the City (GGitC) 2016.

Go Green in the City (GGitC) is Schneider Electric’s global business case challenge aimed at Business and Engineering (bachelor, master, MBA) students worldwide. Teams of two (one male and one female) can apply from January 15 to April 15, 2016 and submit their case study showing their ideas for innovative management solutions in cities for one of the five business challenge topics (namely, Strategy & Technology, Product Reuse & Recycle, EcoDistrict MicroGrid, Low Tech Lab, No Boundaries).

GGitC reaches young talent by engaging them in a contest setting and educating them about Schneider’s business. Participants can be from any accredited school in the world.

John Paul Santos (above) and Christian Sta. Romana of the Polytechnic University of the Philippines grabbed third place at the 2015 Go Green in the City Global Finals in Paris, France. Santos now works as a field engineer for Schneider Electric Philippines.

What do students gain by participating?

The Road to the Finals

Tes Portillo, Country HR Director of Schneider Philippines, walking media audiences about the company, at the launch of the Go Green in the City 2016 last February 8, 2016.

The Philippines made its mark in the competition in 2013 when Alyssa Tricia Eloise Vintola and Lorenz Ray Payonga of the Ateneo de Manila University won the Grand Prize with their Oscillohump, a device that absorbs and stores energy generated from cars going through speedbumps. 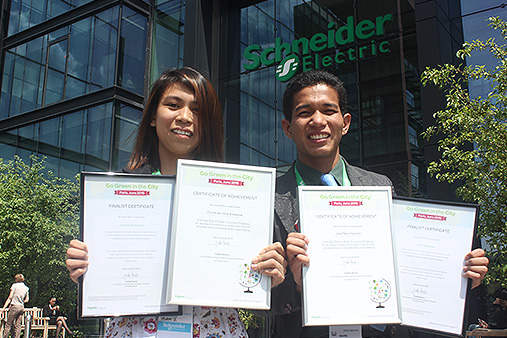 In 2015, John Paul Santos and Christian Sta. Romana of the Polytechnic University of the Philippines (above) grabbed the third prize of the global competition with their Electrifilter project, which generates electricity as it cleanses waste water.

Over the last five years, energy management in smart cities has received increasing attention from students around the world. Attracting more than 12,800 registered participants from 168 countries during last year’s edition, Go Green in the City aims to educate young generations management for sustainable cities.

Dates to Keep in Mind

The semi-finalist teams will have 2 months to work with a mentor from Schneider Electric in order to create a synopsis and a video presentation of their idea. The 12 best teams will be announced on July 15th, 2016, and will then be flown to Paris (France) from September 19th to 22nd, 2016, to compete in the grand final. The winning team will travel the world, VIP-style, with Schneider Electric, visiting facilities, networking with employees and high-level management. They will also be offered jobs with Schneider Electric in their home countries.

Schneider Electric is a global specialist in energy management and automated systems. In 2014 it generated €25 billion in revenue. Our 170,000 employees serve customers in over 100 countries, helping them to manage their energy and processes safely, reliably, efficiently and sustainably. From the simplest switches to the most complex operating systems, our technologies, software and services enable our customers to optimise the management and automation of their businesses. Our smart technologies are helping to rethink industries, transform towns and cities and enhance the lives of their inhabitants. At Schneider Electric, we call this: Life Is On.

Does my child have an eye problem?