Home > archive > What do American Christmas meals have to do with X-Men’s Wolverine, Andy Murray, Tour de France Cyclists and Arctic Explorers
archive

What do American Christmas meals have to do with X-Men’s Wolverine, Andy Murray, Tour de France Cyclists and Arctic Explorers

The festivities are still ongoing and what is more related to this holiday if not food. Just lots and lots of it. foodpanda (www.foodpanda.ph) a mobile and online food ordering marketplace, estimated and matched the sum of food that is actually eaten in just one meal.

In the 13th Century, the medieval occasion ran for 12 days, with lavish feasts every day. Today, an excessive American Christmas meal for just one day means food compositions that equal a 6,000 calories consumption for the average person. This is equivalent to eating 117 biscuits, or 42 bananas, or 23 and a half hamburgers- to name a few.

6,000 calories a day is the amount that Hugh Jackman was consuming to match his role in Darren Aronovsky’s Wolverine film, matching the sum total of what Andy Murray, British number 1 tennis player, eats daily. That is identical to the amount that Olympic biathletes need for their training, Tour de France cyclists to sustain a day’s race and Arctic explorers to endure a day on the ice.

From sitting at the kids’ table, to still sitting at the kids’ table (when this clearly shouldn’t be the case), to quietly sitting in a corner hungover, to being the host, the Christmas table experience somehow remains unchanged. Whatever the seat this year and despite all the arguments or various embarrassments, there is one thing they all share in common: the heaviness from the very amount (and wild combination) of foods. As a food-centric holiday it attracts into its orbit an excessive troop of foods that is not really encountered the rest of the year. And the reason for that is probably because it takes 364 days to digest them. Here is foodpanda/hellofood’s comparative gastronomy selection of a typical American Christmas feast. 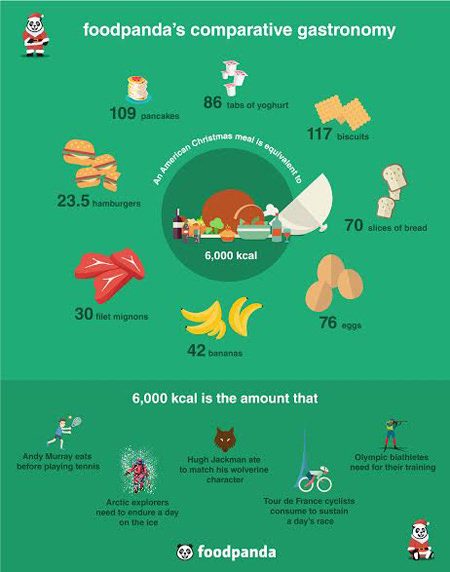 Minute to Own It: Home Credit Philippines announces one minute approval for loan applications

Microsoft Lumia 435 and Lumia 532: The Most Affordable Lumia Devices to Date

Discover the wonders of the Philippines through Street View