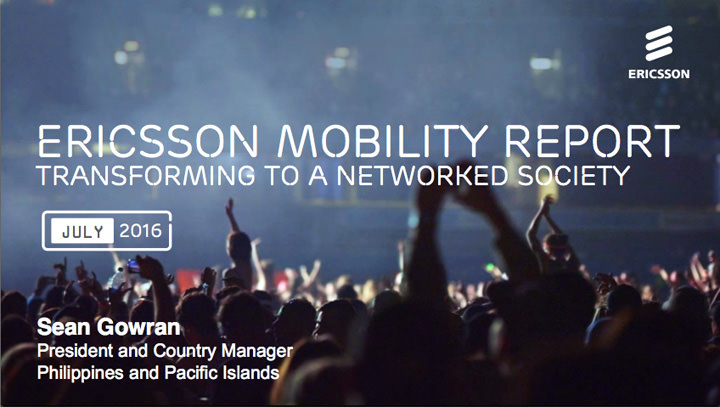 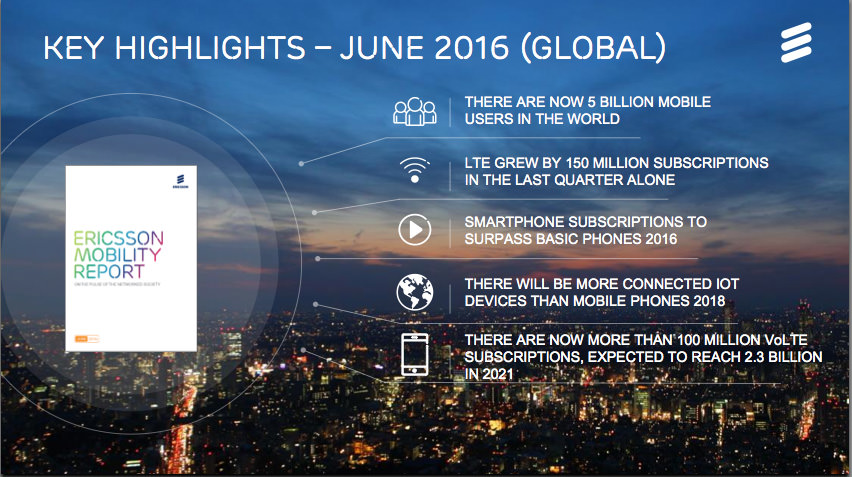 Strong smartphone subscription and data growth are seen to be driving the telecommunications industry in the Philippines, based on the findings from the latest edition of the Ericsson (NASDAQ: ERIC) Mobility Report.

“By 2021, insights from the Ericsson Mobility Report indicate that the smartphone subscriptions in the country will more than double from close to 40 million in 2015 to around 90 million in 2021,” Sean Gowran, President and Country Manager of Ericsson Philippines and Pacific Islands, shared.

Mobile broadband (MBB) subscription penetration for the country stood at almost 50 percent in 2015 but will reach more than 120 percent by 2021. “Aside from increasing affordability of smartphones and improvements in broadband coverage that our operators are working on, we think the youth segment of the market is one of the key drivers of mobile broadband growth, as they are more likely to be viewing online videos, using social networking and instant messaging apps on a daily basis,” Gowran said.

Globally, the Ericsson Mobility Report detailed a dramatic shift in teen viewing habits: use of cellular data for smartphone video grew 127 percent in just 15 months (2014-15). Over a period of four years (2011-15) there has been nearly 50 percent drop in the time teens spend watching TV/video on a TV screen, and in contrast an 85 percent increase in time spent watching TV/video on a smartphone. This, and the fact that the upcoming generation of mobile users are the heaviest consumers of data for smartphone video streaming (Wi-Fi and cellular combined), makes them the most important group for operators to monitor. 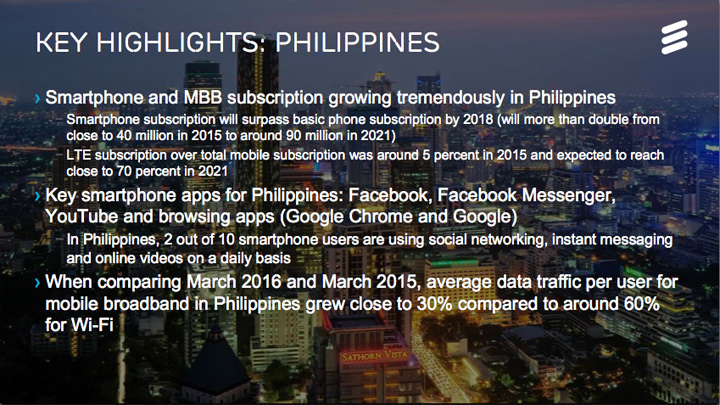 When comparing March 2016 and March 2015, average data traffic per user for mobile broadband in Philippines grew close to 30 percent, compared to around 60 percent for Wi-Fi. Gowran stated that “this is tremendous growth and we recommend that service providers consider how to include Wi-Fi as part of their overall strategy.”

Worldwide, the Ericsson Mobility Report reveals that the Internet of Things (IoT) is set to overtake mobile phones as the largest category of connected device by 2018.

Between 2015 and 2021, the number of IoT connected devices is expected to grow 23 percent annually, of which cellular IoT is forecast to have the highest growth rate. Of the 28 billion total devices that will be connected by 2021, close to 16 billion will be IoT devices.

Gowran revealed that: “IoT is now accelerating as device costs fall and innovative applications emerge. From 2020, commercial deployment of 5G networks will provide additional capabilities that are critical for IoT, such as network slicing and the capacity to connect exponentially more devices than is possible today.”

The Ericsson Mobility Report is one of the leading analyses of mobile data traffic available, providing in-depth measurements from live networks spread around the globe. The report uses these measurements and analysis, together with internal forecasts and other relevant studies, to provide insights into current traffic and market trends in the Networked Society.

The Traffic Exploration Tool, which accompanies the report, can be used to create customized graphs and tables. The information can be filtered by region, subscription, technology, traffic and device type.

The report defines a connected device as a physical object that has an IP stack enabling two-way communication over a network interface.

Changing How Moments are Filmed with the SAMSUNG Galaxy S20 Series