The 2017 NBA Finals is proving itself to be one of the most exciting matchups in recent history, with many anticipating an epic showdown between the Cleveland Cavaliers and the Golden State Warriors—the first time in NBA history that the same teams are meeting in The Finals for the third consecutive season. Fans are already in heated debates about which team is going to win, but what unites everyone is their passion for the game and the search for the best place to catch The Finals.

For those who want to watch The Finals in the comfort of their own homes, Globe At Home is offering customers the chance to watch it with the NBA LEAGUE PASS, a subscription service that allows access for live NBA games, complete with multi-game views and high-definition quality. 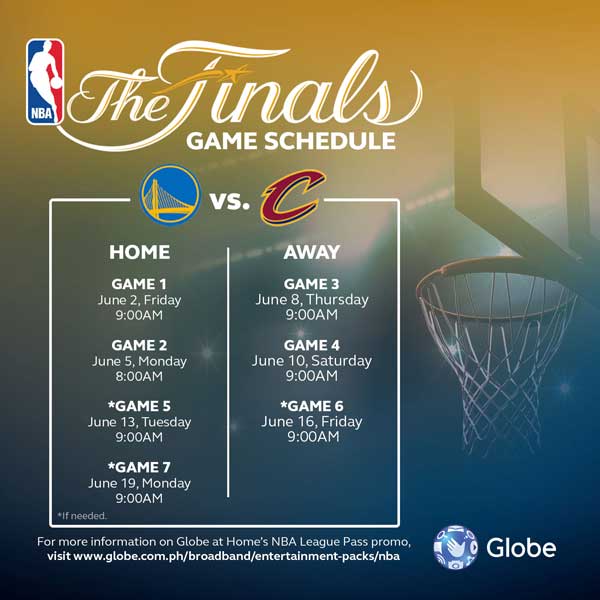 “The NBA Finals is the most important event in the world of basketball, and we want to give our subscribers the chance to be right in the action through Globe at Home,” shares SVP for Globe Broadband Business, Martha Sazon. “Through our Globe At Home Plans starting at Plan 1299, customers can get access to the NBA League Pass, which lets them watch the games live and enjoy other exclusive benefits.”

There are three easy steps in availing the promo code and enjoying the game right when it happens. When you are subscribed to the Globe At Home plan 1299 and up, here is how you can watch the NBA Finals:

Step 1: Go to Globe Broadband NBA Promo Codes and register your name, birthday, and email address (must be the same as the application form details). The promo code will be will be sent within 48 hours upon receipt of registration.

Step 2: After you receive your promo code, go to NBA League Pass Premium – Globe and choose “Redeem your 30-Day Code”

Step 3: First time users can create an account by using your e-mail address or via Facebook, while existing users can sign in using your account. You can then enter your promo code in the promotion box and submit in order to activate your NBA LEAGUE PASS.

The defending champions Cleveland Cavaliers will face the Golden State Warriors at the Oracle Arena for Game 1 of The Finals, which begins on June 2 PHT.

“What’s exciting about this season is the unpredictability of the games. Both teams have legions of fans passionately rooting for them,” says Sazon. “With so much at stake and with the level of excitement reaching an epic high, it’s important for fans to stay up to date. Globe at Home gives customers that opportunity.”

Apart from providing live coverage, users can also watch replays and in-game highlights on-demand on the NBA League Pass, as well as have access to the NBA archives, which has over thousands of hours’ worth of replays from recent seasons, classic games, special features, interviews, and documentaries.

Those who subscribe to Globe Broadband Plan 1299 and up until June 30 have six months of free access to the NBA League Pass. They can also complement this with speeds of up to 10 mbps and 100 GB worth of data allocation per month.

For more information on Globe at Home’s NBA League Pass promo, visit www.globe.com.ph/broadband/entertainment-packs/nba, call the hotline at 730-1010, or visit any Globe store.

Epson strengthens commitment to boost innovations on its trusted products