Home > Tech > The #NBAFinals are Set to Tip Off on Twitter


The matchup is set. The @Cavs and @Warriors will be featured in a third consecutive installment of the #NBAFinals. Cleveland’s LeBron James (@KingJames), Kevin Love (@kevinlove) and Kyrie Irving (@KyrieIrving) take on Golden State’s Stephen Curry (@StephenCurry30), Klay Thompson (@KlayThompson) and Kevin Durant (@KDTrey5) for the Larry O’Brien Trophy.

Two of the league’s best ballhandlers match up… as Steph & the @Warriors face Kyrie & the @Cavs in the 2017 #NBAFinals on ABC! pic.twitter.com/LxS47IdYWP

The best and fastest way to join the live conversation and connect directly with the teams and fellow fans is to search for and Tweet with #NBAFinals. Make sure to follow @NBA and @ESPNNBA to keep up with the latest happenings along the way.

To help bring NBA Finals Tweets to life, Twitter partners with the NBA with a special Twitter emoji. Fans Tweeting with#NBAFinals throughout the series will automatically render an emoji of the Larry O’Brien Championship Trophy. Fans of the Cavs and Warriors can also Tweet using #DefendTheLand (Cavaliers) and #DubNation (Warriors) for special team emojis. 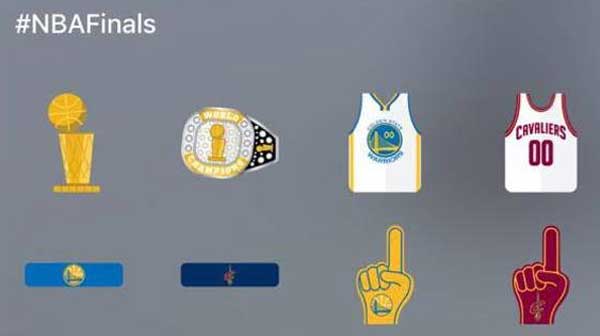 #GoLive during the NBA Finals

“The Warmup”, which streamed live exclusively on Twitter this season, will go live with special shows before each NBA Finals game. The programs, co-hosted by sports and entertainment commentator Ben Lyons (@iamBenLyons) and emcee, DJ and sports personality Ro Parrish (@RoParrish), feature a blend of the NBA, lifestyle, music, and pop culture talk. The first #NBAFinals edition begins June 3 at 12:00 AM Manila time at thewarmup.twitter.com. Fans can also tune-in postgame press conferences live on Twitter and Periscope for the first time ever after each game via @NBA.

There is no shortage of star power during the NBA Finals, so who are fans talking about most? This graphic from@TwitterData looks at mentions of the @Cavs and @Warriors top stars since the playoffs began. 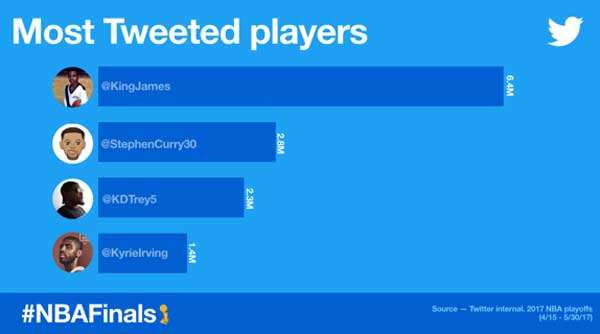 And while there are a ton on shining stars, it all comes down to the best team. It’s a close call with two great teams, but here’s who fans think will be NBA Finals champions.

About Twitter
Twitter, Inc. (NYSE: TWTR) is what’s happening in the world and what people are talking about right now. On Twitter, live comes to life as conversations unfold, showing you all sides of the story. From breaking news and entertainment to sports, politics and everyday interests, when things happen in the world, they happen first on Twitter. Twitter is available in more than 40 languages around the world. The service can be accessed at twitter.com, on a variety of mobile devices and via SMS. For more information, visit about.twitter.com or follow @twitter and @TwitterPH. For information on how to download the Twitter and Periscope apps, visittwitter.com/download and periscope.tv.