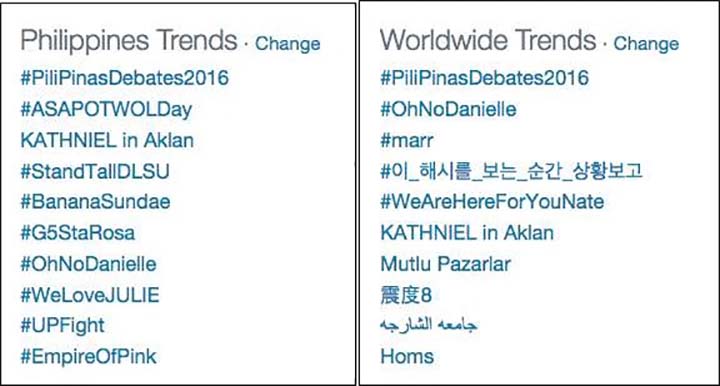 Over 1.3 million Tweets during the Broadcast of the Presidential Debate on 21 Feb 2016

Manila, 22 February 2016 – The election fever is alive and kicking on Twitter as the Philippines saw its first presidential debate in over two decades. Those who saw the debate via television broadcast and online livestreaming weren’t just passive spectators as they actively followed and received live updates about the debate, connected with other viewers and voters, and expressed their thoughts and opinions via Twitter about the statements and answers of the five politicians vying for the Presidential post.

In fact, over 1.3 million Tweets were generated during the live debate (from 5-8pm, 21 February 2016), boosting the #PiliPinasDebates2016 hashtag to the #1 Twitter trending topic not only in the Philippines, but also worldwide. The Twitter conversation peaked over 16,000 Tweets per minute at 6:36pm during an exchange between Liberal Party’s presidential bet Mar Roxas (@MARoxas) and Vice President Jejomar Binay (@VPJojoBinay) on the country’s drug problem during that debate moment.

“We’re excited to empower Filipinos across the nation and all over the world to engage in millions of conversations about the first presidential debate for this year’s #TwitterElection in the Philippines,” said Pratiksha Rao, Twitter’s Head for Media Partnerships for Southeast Asia. “Yesterday’s debate was a resounding success with our media partners and shows how millions of people are flocking to Twitter to experience and participate in the live debate. Join us on Twitter for the future debates as we give Filipinos across 7,000 islands and working overseas an influential voice to be heard in #PiliPinasDebates2016.”

Among all the topics covered during the first debate, it was “Poverty, Development, and Agriculture” that registered the most interest on Twitter with 51% of the Tweets. This was followed by “Peace and Order” (22%), “Track Record” (16%), “Mindanao Issues” (8%), and “Corruption” (2%). 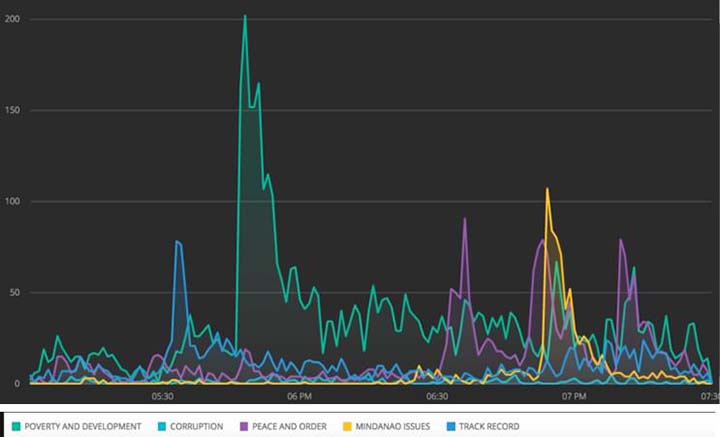 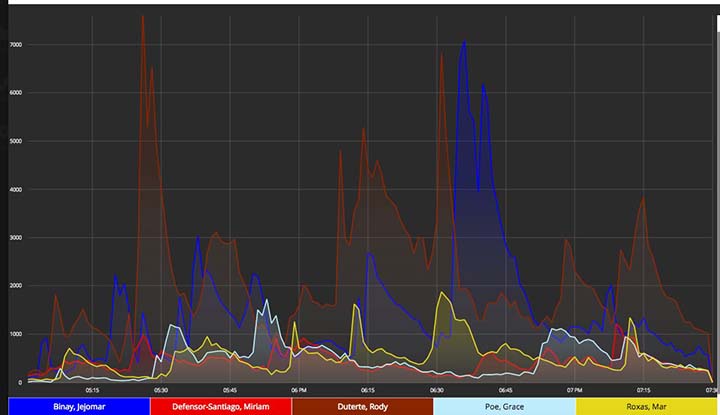 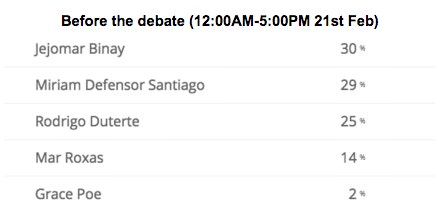 Twitter supplied real-time data, visualizations and analytics to COMELEC (@COMELEC) and its broadcast/media partners to enhance the live debate experience for millions of TV viewers. Tweets using the #PiliPinasDebates2016 hashtag were also shown on-air to provide real-time responses to the candidates’ speeches and answers. In addition, the broadcast/media partners used SnappyTV to share videos of the top debate moments, so that Filipinos could see and hear the candidates on Twitter. 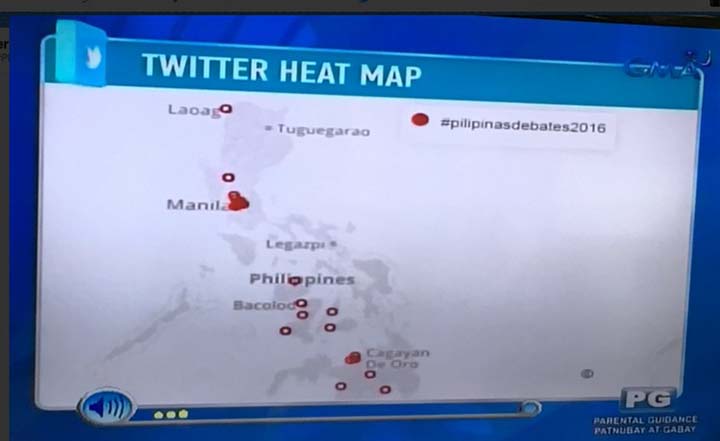 Before, during and after the debates, Filipinos can follow and connect with the presidential candidates via Twitter (in alphabetical order):

Below are some of the most shared Tweets from yesterday’s debate, ranging from Pinoy pride to each candidate’s performance to the debate schedule. Filipinos also live-Tweeted the TV debate to share the action with their followers and crowdsourced their own hashtags. One fun example is the #DuRiam hashtag for the people’s reaction to the friendly and complimentary exchange between Senator Miriam Santiago (@senmiriam) and Mayor Duterte (@RRD_Davao) in the first round of the debate.

If only Duterte, Santiago, and Poe can work together as one. What a prosperous nation Philippines could be. ???????? #PiliPinasDebates2016

Tweeting this again for everyone! There are 2 more debates to be hosted in LuzVi! Be Informed! #PiliPinasDebates2016 pic.twitter.com/T5qVKHLGMg

Filipinos can also continuously search and participate in elections-related conversations by following @COMELEC (https://twitter.com/comelec) or Tweeting and searching the #PiliPinasDebates2016 hashtag on Twitter. The public may also view all crowd-sourced debate questions and comments via Tweets by visiting http://www.electionsphl.com/pilipinasdebates.

This summer, it’s all about easy-style timeless linen