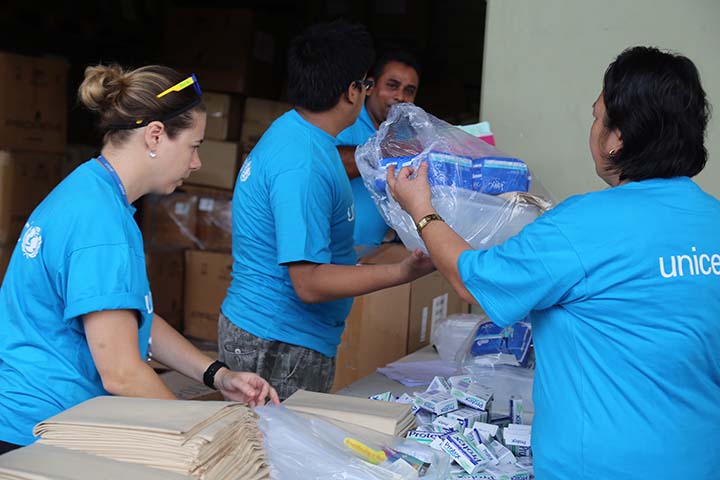 On 22 February 2016, UNICEF staff and volunteers pack WASH kits (water, sanitation and hygiene kits) and school supplies at UNICEF's warehouse in Suva, Fiji. Category 5 Tropical Cyclone Winston made landfall in Fiji on Saturday 20 February, continuing its path of destruction into Sunday 21 February. A state of natural disaster and a nationwide curfew had been declared by the Government of Fiji earlier in the evening. Flights in and out of Fiji were also cancelled due to the extreme weather. Power lines are down and communications are limited but UNICEF Pacific Communications Specialist and New Zealander, Alice Clements, has said from her Suva base, "We certainly felt the impact of TC Winston in Suva with destructive, howling winds and the sound of rivets lifting from roofs a constant throughout the night. "We can't say for sure yet how the rest of the country fared but rapid assessments will be undertaken by the Fiji Government to determine the full impact and what response will be required. It is likely that smaller villages across Fiji will have suffered the most, given their infrastructures would be too weak to withstand the power of a category 5 cyclone. Families may have lost their homes and crops therefore leaving them without shelter, food and a livelihood. Those families will have lost everything. There is also considerable risk for those that live by the sea or rivers as flash flooding and river flooding could occur due to heavy rains." UNICEF is a member of the Pacific Humanitarian Team and will be on standby to provide emergency supplies and additional personnel, if required. UNICEF has prepositioned supplies in Suva and Nadi including water kits, health kits and education materials such as school tents. If called on to assist, UNICEF will actively support the Fiji Government in leading clusters of agencies working in water and sanitation, education and nutrition, and in child protection. as tarpaulins.
archive, Featured, News

SUVA, 23 February 2016 – Less than 36 hours after Cyclone Winston devastated Fiji, UNICEF Pacific has begun assisting those most affected, in partnership with the Government of Fiji. UNICEF today began to distribute pre-positioned emergency supplies in Fiji, with a focus on distribution to worst-affected communities.

UNICEF Pacific Deputy Representative Isabelle Austin said “In the immediate aftermath of a disaster such as a cyclone, UNICEF’s first priority is to ensure the protection and well-being of the most vulnerable, including children, pregnant women and new mothers. Our thoughts are with those most-affected communities, many of whom have lost everything and are now beginning to pick up the pieces.

UNICEF is working around the clock preparing supplies for transport and distribution through the Government of Fiji, which is providing extremely strong leadership on this response. UNICEF will also continue to assist the Government with rapid assessments that will take some time to fully complete given the incredible scale and complexity of this disaster.

“UNICEF is committed to helping children and families as they begin to rebuild their lives following the most severe cyclone in Fiji’s history. UNICEF will actively support the Fiji Government to lead a rapid and coordinated response, with a focus on water and sanitation, education, nutrition and child protection. We will continue to work closely with Government and other partners to ensure a coordinated response that will support and complement the Government’s efforts,” added Ms. Austin.