BIOSTAR is introducing a new design for the boards, whereby they are adding an integrated chip to strengthen electrical stability and prevent damage from lightning strikes and electrical surges. BIOSTAR is the first Motherboard manufacturer to offer motherboards with these features and specifications so called “SUPER LAN Surge Protection”. Going forward, all BIOSTAR series products will incorporate this technology.
PC systems can be damaged or destroyed by electrical surges. These are voltages which are much greater than the normal working voltage and which appear in a system for a short period of time. 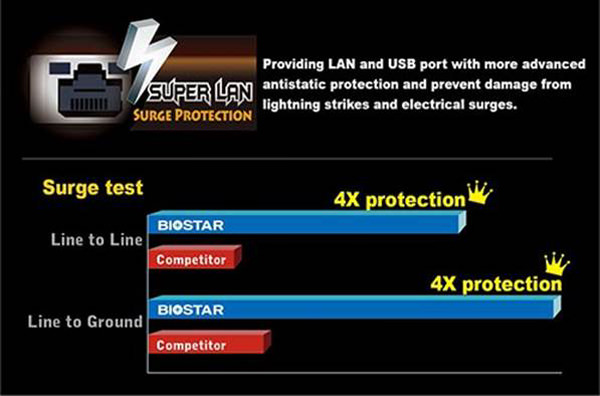 BIOSTAR “SUPER LAN Surge Protection” wants to insure that the motherboards have a high degree of protection from such surges by the use of hardware devices, directly built into the motherboard, which limit surge voltages reaching protected equipment to safe levels.

Look for these new boards at: http://www.biostar.com.tw

Enjoy 365 days of free Starbucks Coffee: A cupful of possibilities each day