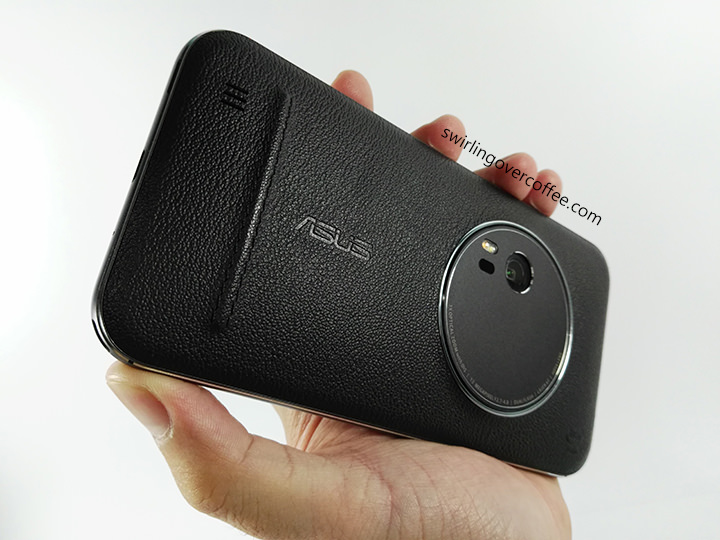 ASUS ZenFone Zoom Review – No More Zooming with Your Feet

Sometimes you want to take a picture, with your phone, but you’re too far. And pinching out to zoom (digital zoom) degrades the image. Either you walk closer (zoom with your feet) or you settle with a not so good image. To this need for optical zoom in the camera of a good phone, ASUS offers the ZenFone Zoom. It’s the thinnest 4GB RAM phone with 3x optical zoom – the barrel doesn’t protrude when you zoom in, by the way. The Zoom is half portable hard drive (128GB internal storage, expandable) and compact zoom camera (with low light mode and manual mode and physical shutter and video buttons) all in one. Some settle for a two-device set up – taking pics with a camera and copying pics via WiFi to their phone, and then sharing them online. With the ZenFone Zoom, your camera and phone are one.

Let’s go over the key features in detail. 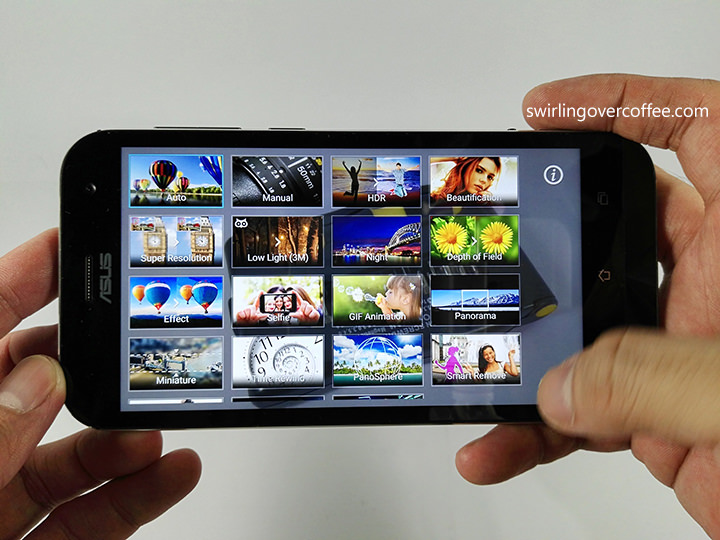 Please note that our review package is meant for media representatives, hence the elaborate (and awesome) box with the Zenny Doll, and the ZenFone Zoom shooting tips card deck. Retail version only includes the smaller box with the Zoom, charger, headphones, and lanyard.

Let’s go over the specs first before we hit the good, the bad, whether the Zoom is for you.

Very good build quality. The metal frame, solid heft, and faux leather back all combine for a premium feel. There’s no denying the Lumia 1020 look of the rear circular plate housing the sensor, flash, and zoom mechanism. But who cares? This is a 4GB RAM monster camera phone with “real” zoom. 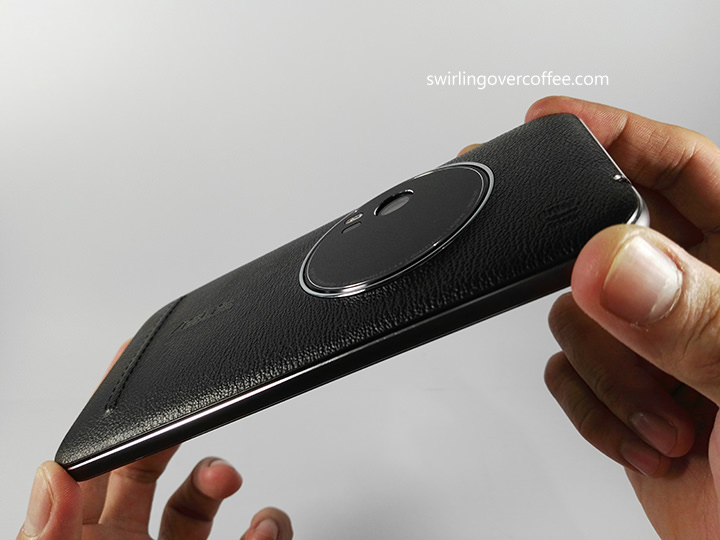 When you take lots of rear camera pictures and videos with the Zoom, using the physical buttons become second nature in no time. Of course, as with how most people take pics with smartphones, you’ll tap to focus and click the shutter key on the display at first. Later on you’ll enjoy “slowing down” your image composition – framing the shot right, choosing the focus point, setting the exposure, and then pressing the physical shutter key. You get better images that way.

Of course, if you just want to take good pics minus the hassle, the Zoom’s auto mode can handle most scenes you throw at it (for everything else, there are modes to choose from, including manual). You can even ignore the physical buttons if those are not your thing.

The optical zoom delivers as promised, we saw no image degradation even at 3x optical zoom (unlike with digital zoom). That means you can take pics of your niece’s graduation, you don’t have to walk closer to the stage. Landmarks, when you travel, that are too far away or are cordoned off to the public, you can still shoot. Pets that run away from phones and cameras brought near them can now be photographed discreetly, so you can catch adorable moments. You can even take food shots of dishes on the next table, without getting noticed by the people who actually ordered them. If your crush is in an office cubicle too far away, and it will be too obvious if you go near him, by all means take a picture from a distance. The ZenFone Zoom to the rescue.

Just a reminder, the optical zoom works better with adequate lighting. The Zoom’s aperture is 2.7 to 4.8. The rule with aperture is that smaller the number, the more light can come into the camera sensor. That means the further out you extend the optical zoom, the less light can come in. But don’t let this stop you, if you’ve seen the optically zoomed-in sample images in this review, the ZenFone Zoom seems to defy the rules!

The image quality is on par with the previous ZenFones, meaning, it’s great. See below.

As with a DSLR or mirrorless camera, the Zoom rear camera UI allows one to adjust (and set as default) Optimizations (saturation, contrast, sharpness, noise reduction, backlight, detail enhancement. This way should you want a more vibrant or saturated or contrasty look to your photos, you can certainly get them. 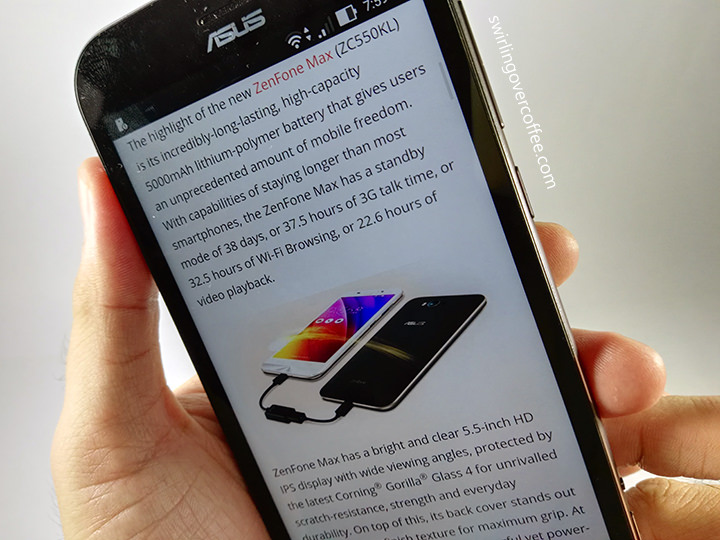 The combo of the vibrant and color-punchy 5.5-inch display plus 4GB RAM make for a good multi-tasking and gaming phone; and as a video marathon device (because the storage capacity is off the charts), the audio is also sufficiently loud and not tinny.

The internal storage is a feature unto itself. First seen in the ZenFone 2 Deluxe, the same mammoth 128GB capacity, which can be expanded to another 128GB via microSD, is also featured in the Zoom. This means, even though you have Cloud storage, you will never have to worry about having to delete pics, vids, files, and apps!

The Zoom rarely got warm, despite the abuse we put it through – games, social media, camera usage, video watching. We got about 12 hours of abuse (we used it to cover events, so assume about 2 hours of data usage per day at least) from the battery. If you don’t abuse it like we do, you’ll get more. You can extend the battery life further with power saving options. If you plan to use the Zoom as you main phone, it won’t hurt if you bring a powerbank with you.

The ZenFone Zoom is noticeably large, but only because you notice that there’s so much space on the forehead and chin, meaning, the display could have been bigger, maybe 5.7 inches plus front facing speakers. The Zoom is nearly the same length and width as the 5.7-inch Nexus 6p. 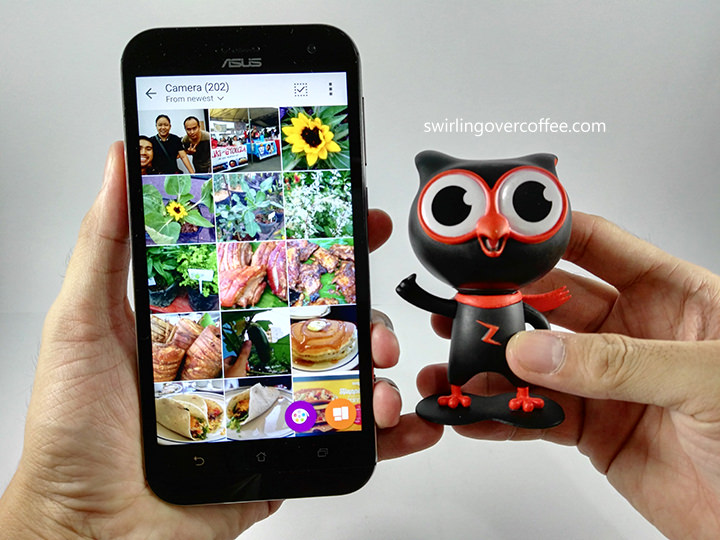 The capacitive keys on the phone’s chin – back, home, and menu (recent apps) – are still not backlit but are still very responsive. It’s a matter of getting used to them. We’re used to them.

When you pinch in to zoom or pinch out to zoom out, there’s a slight delay before the optical zooming responds. But you get instant zooming in and out results when you use the volume up and down physical keys to zoom in and out. Remember that.

The rear flash can’t reach very far, since the flash prioritizes bringing back brown skin tones, which actually works, instead of long range white scatted light. Still, this opens up an opportunity for ASUS to offer their ZenFlash accessory, which attaches to the rear of the ZenFone.

The front camera has no flash, or perhaps we just go so used to the ZenFone Selfie and dreamed of other ASUS phones making that feature a standard? 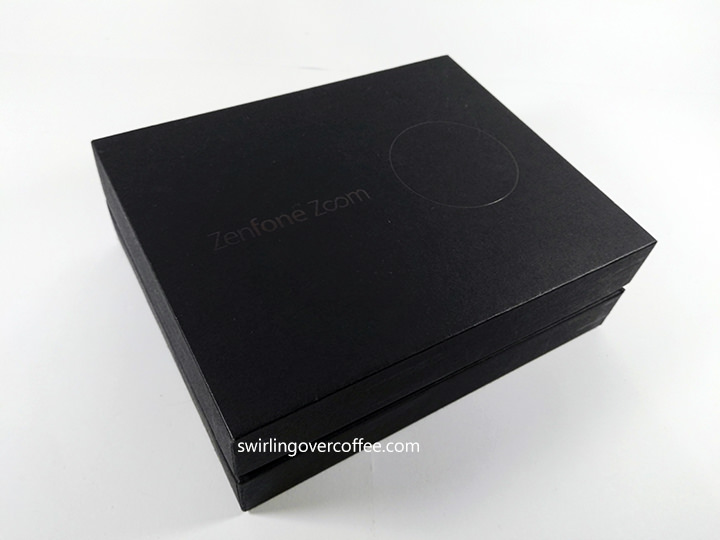 Is the ASUS ZenFone Zoom for you?

The P26995 price tag seems hefty at first, but not so much when compared with other flagship phones, and no other flagship offers a 4GB RAM + Optical Zoom combo. The niche market of the ZenFone Zoom are those who’ve really loved the performance (4GB RAM), storage capacity (128GB internal and expandable), camera image quality, and UI (one the most logical, intuitive, and organized) of the ZenFone series.

Sometimes, what you need your phone to do is not withstand 30 minutes under water, but zoom in closer to your child dancing on stage, your favorite performer during a concert, or your crush waving at you from across the street. It’s in this department that the ASUS ZenFone Zoom wins.

JBL Joins Consumers in Celebrating Their Passions with #AmplifyPassion

Lazada Launches the Biggest Affiliate Competition in the Philippines