Advanced Persistent Threats or APTs as we know them will cease to exist in 2016, replaced by deeper, embedded attacks that are harder to detect and trace back to the perpetrators, according to Kaspersky Lab experts.

In their Predictions for 2016, the experts reveal that while the ‘Threat’ will remain, the concept of ‘Advanced’ and ‘Persistent’ will disappear to reduce the traces left behind on an infected system.  They will also rely more on off-the-shelf malware to minimize their initial investment.

Kaspersky Lab’s Predictions for 2016 are based on the expertise of the Global Research and Analysis Team, the company’s 42 top security experts, located all over the world.

Each member contributes unique expertise and, in 2015 alone, their insight and intelligence resulted in detailed public reports on 12 APT actors, “speaking” different languages, including French, Arabic, Chinese, Russian, English, among others. 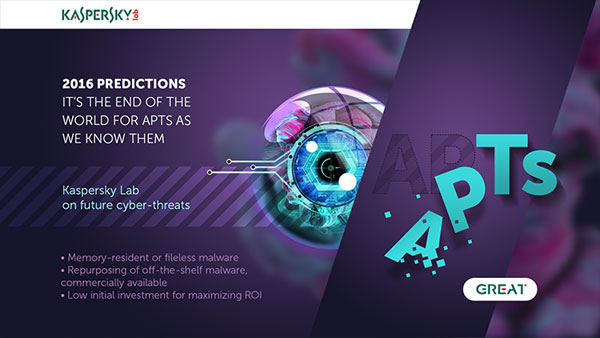 “2016 will also see more players entering the world of cyber-crime. The profitability of cyber-attacks is indisputable and more people want a share of the spoils. As mercenaries enter the game, an elaborate outsourcing industry has risen to meet the demands for new malware and even entire operations. The latter gives rise to a new scheme of Access-as-a-Service, offering up access to already hacked targets to the highest bidder.” added Juan Andrés Guerrero-Saade.

Kaspersky Lab’s longer-term predictions include, among others:

“A new year of challenging developments lies ahead for the IT security industry. We believe that sharing insights and predictions with our colleagues across the industry as well as with government, law enforcement, and private-sector organizations will promote the necessary collaboration to proactively face oncoming challenges head-on.” concluded Juan Andrés Guerrero-Saade.

Actions a business should take today:

Actions a business should take tomorrow:

And what about individuals?

The full text of the “2016 Prediction: It’s the end of the world for APTs” report is available on the Securelist website.

To look back at what the Kaspersky Lab experts expected to see in 2015, please read the article from Kaspersky Security Bulletin 2014, Predictions 2015 and “A look into the APT crystal ball” by Costin Raiu, Director of Global Research and Analysis Team.

Kaspersky Lab is one of the world’s fastest-growing cybersecurity companies and the largest that is privately-owned. The company is ranked among the world’s top four vendors of security solutions for endpoint users (IDC, 2014). Since 1997 Kaspersky Lab has been an innovator in cybersecurity and provides effective digital security solutions and threat intelligence for large enterprises, SMBs and consumers. Kaspersky Lab is an international company, operating in almost 200 countries and territories across the globe, providing protection for over 400 million users worldwide.

Family and Friends on Valentines at Holiday Inn Manila Galleria

High Performance Scanning at the Palm of your Hand

ARC Gets Ready for the New Normal