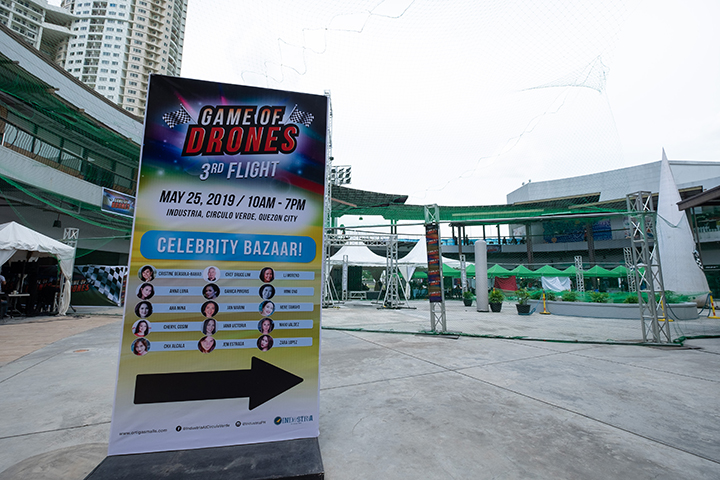 The biggest Philippine drone competition returns for its third year

Following its success for two consecutive years, the country’s biggest drone competition dubbed as Game of Drones returns this year for the third flight which took off on May 25, 2019 in Industria at the Circulo Verde. Game of Drones: 3rd Flight is one such event, which provided FPV (First-Person View) pilots and drone enthusiasts an opportunity to show off their flying skills without having to wander far from the city, thanks to Industria’s wide open spaces which is ideal for those who love to fly drones.

Adventures, of course, should be complemented by other lifestyle pleasures and that’s why on ground, there was as much excitement as that in the skies. Tintin Babao, among many other celebrities, held the Celebrity Bazaar to be enjoyed by everyone. Food merchants were present to ensure that everyone was revved up for a whole day of fun.

The contest covered three categories – Time Trial, and the Rotocross finals, all of which allowed participants to battle in various contests for supremacy of the skies.

Rotocross is a spec class game. For this, participants were again grouped into batches of four for the elimination round. They flew their drones through a marked course, and the racers who finished first per batch moved up the ladder of eliminations. For the third year in a row, champion Jerico Taleon received a PHP 20,000, a trophy, and a LowePro bag. Runners-up were Gabriel Villaver and August Gatchalian Jr.

Lastly, a Drone Photography also took place as an opportunity for photography enthusiasts to take breathtaking aerial shots within the Circulo Verde vicinity. This gave them the freedom to unleash their creativity using their drones. The top submitted entries were shown at the venue for judging, and the winner who took home PHP 5,000 was Lawrence Samaco.

Drone hobbyists, enthusiasts, novice racers, and those who just want a taste of some outdoor fun were present to experience and watch as the drones battled for supremacy of the skies.

Industria is located within Circulo Verde, Calle Industria, Quezon City, an active lifestyle and entertainment destination that has become a haven for those who love one-of-a-kind adventures. It has an interesting mix of tenants composed of a neighborhood grocery, unique gastronomic concepts, a fitness center, weekend markets and envisioned to be a venue for street art shows, and music festivals.

How to be scandal-proof in the age of data breaches

ASUS enters a new dawn with the RE:DEFINE 2019 Grand Launch of the new ROG Laptop Lineup

Lenovo this June – gadget sale up to 70% off, cash back program for ideapad buyers, Accidental Damage Protection program launched

OPPO Celebrates an OPM Weekend at the UP Fair Roots 2018