Wireless services leader Smart Communications, Inc. (Smart) recently announced that it has stepped up the rollout of its new LTE (Long-Term Evolution) network across the country to meet the growing demand for high-speed Internet services.

As part of the current phase of network deployment, Smart is deploying a total of 1,400 new LTE sites, comprised of both FD-LTE and TD-LTE installations, to bring its total LTE footprint to more than 3,400 sites across the country.

The telco said it will be beefing up its mobile network infrastructure by adding 400 more mobile LTE sites, majority of which will be in Metro Manila.  This is part of the continuing roll out program for its LTE facilities.

To complement its mobile LTE services, it is also rolling out 1,000 additional TD-LTE sites to support its fixed wireless service to homes. This will bring high-speed mobile broadband speeds to more cities and municipalities in Bulacan, Cavite, Cebu, Laguna, Pampanga, Rizal, Metro Manila among many others.

“Our continuing investment to expand capacity, reach, and availability in our network allows us to deliver the best Internet experience to subscribers in both mobile and fixed platforms,” said Smart Technology Group Head Rolando Pena. “We are also deploying new technologies such as LTE Advanced to be able to respond to the expected demand in mobile data for years to come.”

The announcement comes on the heels of Smart’s recent activation of its LTE Advanced network in Mactan Island, Cebu during the recently concluded 10th Asian Carriers Conference. During the event, Smart consistently recorded speeds of more than 100 Mbps using the next-generation mobile network technology.

This is the second site Smart has fired up for its next-generation LTE Advanced network, also referred to as ‘5G’ in some overseas markets. The telco’s first LTE Advanced network initially went live at the JUMP Experience Center in Mandaluyong back in August. 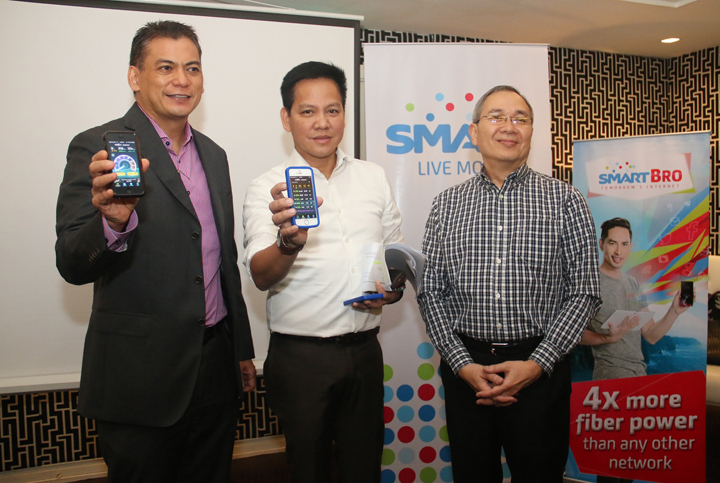 From left: Smart EVP and Wireless Consumer Division Head Charles A. Lim, PLDT & Smart Technology Group Head Rolando G. Pena, and Smart Public Affairs Head Mon Isberto showcase speedtest results on the Smart LTE network, which will be beefed up with the rollout of 1,400 new LTE sites across the country.

“Our strategy is to roll out a combination of network platforms meant to address the different needs and requirements of subscribers in different areas,” Pena said. “Our mix of TD-LTE, HSPA+, and mobile LTE deployments respond to varying needs of the market, with the common goal of bringing the Internet closer to every Filipino.”

“This is complemented by bringing high-speed Internet access to homes through Fiber-To-The-Home (FTTH) and DSL. To date, FTTH is now available in 1,463 areas/villages in 121 cities and municipalities. By year end 2014, it is expected to be available in 1,725 areas/village with a total capacity of 300,000 lines,” Pena added.

Smart is able to deploy a mix of fixed and wireless technologies because the PLDT Group has rolled out more than 90,000 kilometers of fiber-optic cables around the country. It has also modernized its mobile network to make more than 10,000 4G sites, enabling it to quickly roll out LTE services via a simple software update.

With the country’s most advanced and robust mobile network, Smart is able to deliver the best and fastest mobile experience to subscribers as validated by a series of field tests and various customer engagement activities nationwide, company officials said.

According to two of the most popular crowdsourced speed test apps in the market today (Speedtest by Ookla and Sensorly), Smart’s mobile network has delivered the fastest download speeds to a wider set of users all around the country.

“But we’ve gone a step further and validated this with users on the ground,” said Charles A. Lim, EVP and Head of the Wireless Consumer Division at Smart. “In sample tests conducted in at least 500 areas nationwide, Smart emerged with the fastest mobile speeds among telcos. This is further validated by speed tests conducted by users in more than 100 areas nationwide.”

Smart’s robust network allows it to deliver the most innovative mobile experience to users, with new and diverse offerings that cater to every lifestyle need of Filipinos across the country.

Smart is taking the lead in making content available to more Filipinos especially those who have no credit card. Smart’s ‘supercharged’ network is allowing everyone to lead the fully connected life with access to content such as music (SPINNR), videos (ViewStream and Blink), books and magazines (Buqo), and games (GameX), among others.

The telco also recently announced the availability of PisoNet, a revolutionary product offering that aims to bring the benefits of the Internet to more users nationwide. For just P1, Talk ‘N Text subscribers are able to surf the Internet on their phones for 10 minutes through PisoNet.

Smart likewise announced a groundbreaking initiative with the Wikimedia Foundation dubbed Wikipedia Zero, which will give more convenient access to knowledge to its users all around the country. The initiative gives Smart, Sun Cellular and Talk ‘N Text users free access to the Wikipedia sites and mobile apps until February 3, 2015.

“With the largest network in the country, we are able to deliver all of these services to majority of Filipinos nationwide. With a robust network they can rely on, Smart subscribers are able to live more, connect fast, and have the best Internet experience possible today,” Lim added.