LRMC Advisory on LRT-1 Operations in Line With MECQ Announcement


SMART recently partnered with SUMMIT MEDIA to deliver a landmark service that will allow its 55 million subscribers access to a wide range of digital books and magazines through the mobile app Buqo.

With the partnership, subscribers no longer need to have a credit card to purchase eBooks and subscribe to eMagazines because all they need is their cellphone load to do so.

MANILA, Philippines – Two industry leaders recently came together to forge a strategic alliance that will revolutionize the e-Book and e-Magazine landscape in the Philippines.

Philippine mobile leader Smart Communications, Inc. (Smart) announced that it has signed an exclusive partnership with Summit Media (Summit), the country’s leading magazine publisher, to give the former’s subscribers easier and more convenient access to digital books and magazines via their mobile devices.

As a result of the tie-up, more than 56 million subscribers of Smart nationwide will gain access to books and magazines in digitized format through the mobile application called Buqo. Smart subscribers will be able to make digital downloads using their prepaid credits or have them charged on top of their postpaid accounts.

“With this groundbreaking partnership, we are giving our subscribers a chance to enjoy unique and relevant digital content on their mobile devices,” said Mellissa B. Limcaoco, Head for Innovations & Product Development Group at Smart. “Now, they can use only their Smart prepaid and postpaid subscriptions as a key to the vast world of digital content available through Buqo.” 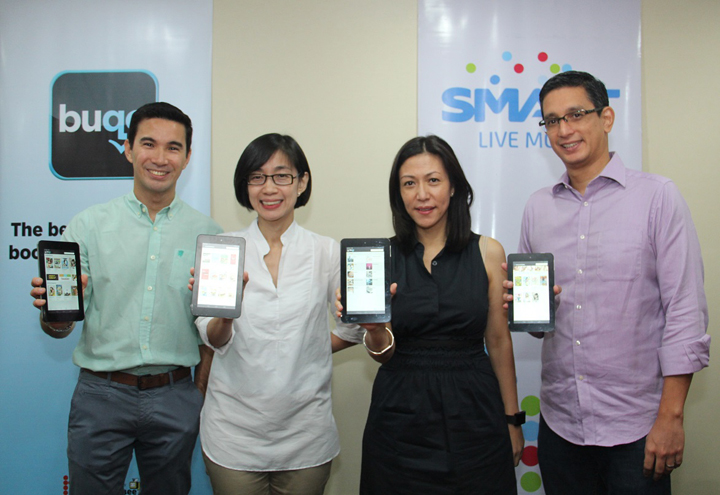 “The low credit card penetration in the Philippines has always been a barrier for companies offering virtual goods to Filipino consumers,” said Lisa Gokongwei-Cheng, President of Summit Media. “By partnering with Smart, we lower the barrier to entry and give more users access to a wide range of content that can be unlocked using only their cellphone load.”

Smart will soon be announcing special rates and deals for books and magazines that will be exclusively available to its subscribers.

Buqo is the localized version of Ookbee, the number one e-Bookstore app in Thailand, and was co-developed by Summit subsidiary Hand.Interactive, Inc.

Current titles available through the store include Yes! Magazine, Candy Magazine, Esquire Philippines, and a host of other Summit Media magazine titles. Titles from other publishers are also available, including the likes of Gadgets Magazine, PC Shopper, Car Finder, Speed Magazine, and Circuit Magazine, among many others.

The Buqo mobile app with SMART operator billing is currently available for Android devices. Books and magazines downloaded through the app are readable both on smartphones and tablet devices.

Festive Time Or Any Time, Shopping Is Just A Click Away With Online Convenience

ASUS Zenfone Series to be Available on July 17

Symantec Predictions for 2016 — Looking Ahead

LRMC Advisory on LRT-1 Operations in Line With MECQ Announcement