Smart Communications, Inc. (Smart) and the University of the Philippines have signed a Memorandum of Agreement that will advance the national university’s bid to become globally competitive. 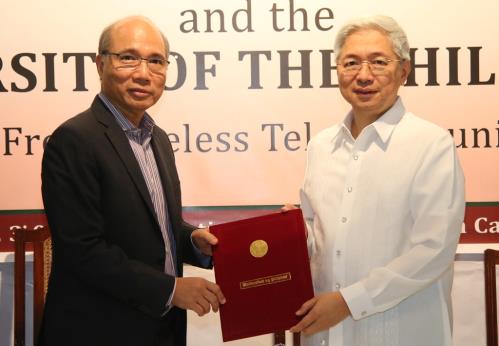 Under the Memorandum of Agreement (MOA) signed by UP president Alfredo E. Pascual (above right) and Smart chief wireless advisor Orlando B. Vea (above left), Smart will provide free wireless connectivity and access points to all the constituent universities of the University of the Philippines System across the country..

The MOA was signed at the UP Executive House in Diliman, Quezon City.

“We have to start somewhere, right now — as they say in UP — kung hindi tayo, sino; kung di ngayon, kailan? This MOA signing is a good way to help make the eUP project a reality. We’re in this together,” said Vea, who is a UP alumnus.

A Smart partner in educational initiatives

Smart is a committed partner in reinforcing education and development programs that benefit the students and the nation. Its continuous support to students and universities is demonstrated in the Smart Wireless Engineering Education Program (SWEEP), its partnership with the UP Open University (UPOU). Smart and UPOU are jointly offering courses on Android Mobile Applications Development, and Technopreneurship, via the massive online open course (MOOC) model.

Under its Smart Schools Program, Smart has instituted various customized programs that cater to the specific needs of learning communities from primary up to the tertiary level in a bid to help enhance Philippine education using mobile and web technologies.