MANILA, Philippines – Filipinos have always loved sharing television time with friends and loved ones. And with the advent of internet-enabled television sets – also known as smart TVs – people today have better and more varied entertainment options than ever before.

Skyworth Digital Holdings Limited (Skyworth), a leading manufacturer of LCD and LED TVs, and Japanese consumer electronics firm Toshiba Corporation (Toshiba) up the ante in the Smart TV marketspace with their line of UHD smart TVs – the Android TV series. Android powered TVs. Thanks to both firms, rich, cutting edge viewing is made even more accessible. With the Android TV series – Skyworth and Toshiba are looking to give every Filipino a next generation home viewing experience.

“Many of our fondest memories come from time spent with family in the sala, watching our favorite TV shows and movies,” says Skyworth Philippines General Manager Martin Han. “With smart TVs like the Android TV series, Filipinos have a whole world of entertainment options right at home. And these can now be enjoyed with 4K resolution and top notch sound, at excellent prices.”

Skyworth and Toshiba’s newest line, the Android TV Series, is equipped with features geared towards elevating the home viewing experience. With 4K Ultra HD resolution at 3,840 x 2,160 pixels, it offers four times the resolution of a full HD television.

Coming in 50”, 55” and 65” display models, the Android TV series is a perfect addition to any home with its sleek design combined with modern functionality.

Perfect for tech savvy users, the Android TV Series comes with Android 6.0.1 (Android Marshmallow) pre-installed, granting access to the full suite of Android entertainment and thousands of apps via the Google Play Store. Users can stream content to their TVs effortlessly via Netflix, Youtube, and Spotify.

The Android TV Series set itself apart with a special feature – Voice Command (powered by Google). With just a push of a button, content is easily accessed by speaking into the remote mic. Voice Command is perfect for opening apps (Games, Music Apps etc.), searching for movies, changing input/s, and instant Wikipedia. Even more impressive is Voice Command can recognize 88 different languages (including Filipino). So push a button, and “Just say what you want”. 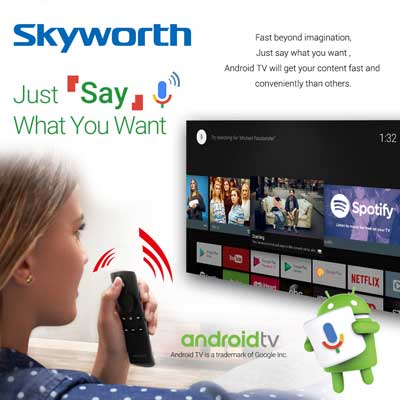 The Skyworth and Toshiba Android TV Series Smart UHD TV is made for gamers too. Users can dive into single-player, multi-player, online or offline games. Whether casually or serious, Android TV offers new ways to play directly on the TV with the use of a special controller.

The Android TV series also seamlessly integrates with other devices. With standard Wi-Fi and Bluetooth connectivity, users can use their mobile phones to control their television sets the Android TV Controller app, control all application that are compatible with Google Cast (Google Home), and send or share photo ,music, video from your device to your TV (All Cast).

And with Chromecast built-in, Android TV series allows viewers stream media from their phone, tablet, or laptop straight to their Skyworth and Toshiba TVs, giving them full control of their viewing experience.

Partnering with Google and Toshiba

Established in Hong Kong in 1988, Skyworth has one goal – to provide “the most wonderful digital life for people worldwide.” Skyworth is now one of the Top Five Color TV brands in the world and a leading brand in Chinese display industry market. 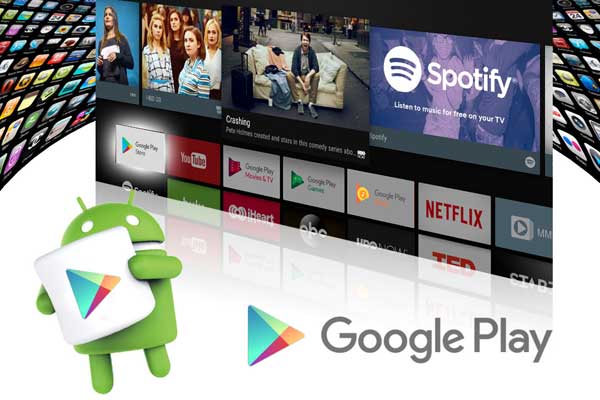 The company’s television line is devoted to providing excellent digital display products and services at the most competitive prices as an important part of living a full and wonderful life.

Through its recent purchase of Toshiba Group’s Indonesian manufacturing base for TVs and twin-tub washing machines, Skyworth has acquired a license to use the Toshiba brand name in Asia, excluding China.

Both Skyworth and Toshiba TVs are also licensed by Google, opening users to enjoy the rich entertainment options provided by the Google Play Store, while allowing easy integration with apps such as YouTube, Google Docs, and others.

About Skyworth
Skyworth was established in 1988, with the head office located within Shenzhen High Tech Industrial Park which is honored as ”China’s silicon valley”, and has more than 20,000 employees. Skyworth is a large-scale high-tech corporation mainly engaged in the development and manufacturing of consumer electronics, display devices, digital set top boxes, security monitors, network communication, semi-conductors, refrigerators, washing machines, cell phones and LED lighting etc. In 2000 Skyworth was listed on the main board of HK Stock Exchange (HK0751). After a development of more than 20 years, Skyworth has grown to be one of the Top Ten Color TV brands in the world and a top brand in Chinese display industry market, and was ranked 14th among the top 100 electronic enterprises in China. In 2012, the brand value of Skyworth has reached 5.7 billion USD.

Home Credit named “Employer of the Year” in PH, APAC