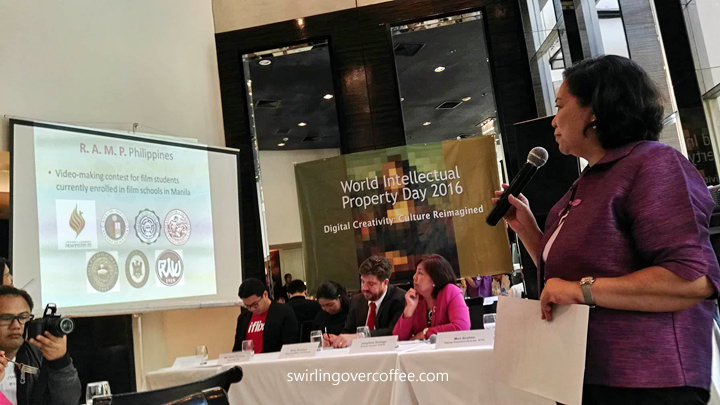 The contest seeks to encourage today’s youth to support films by watching the theatrical release and refraining from pirated media such as torrents or peer-to-peer sites. As digital natives, today’s youth consume content mainly online through their mobile or PC devices. By patronizing legal sources such as subscription-based streaming services, Filipino TV and movie fans help the creative community to continue making movies and TV programs that audiences love.

“The film industry is an important component of the country’s creative industries which generates substantial employment opportunities. The intellectual property system recognizes the vital role of the creative sector and provides them with incentives to their creations. The respect of the intellectual property rights of the creators and producers of films and movies is therefore important and should be inculcated in the minds of the youth who are not only the movie goers and film watchers but are also the future artists, creators, and filmmakers of this country,” said Josephine Santiago, Director General, Intellectual Property Office Philippines (IPOPHL). “The IPOPHL, thus, supports this contest as an awareness campaign among the youth on the importance of protecting intellectual property rights and preventing the on-line piracy of films, movies and TV shows.” The contest was announced during the 2016 World IP Day.

The contest is open to students who are currently enrolled in film schools in Metro Manila. Interested contest participants must create a 60-second video on why Filipinos should respect copyrighted content and what they can do to protect IPR online.

“Each illegally downloaded movie makes it difficult for artists to craft high quality, creative films, and deprives filmmakers the opportunity to pursue ambitious new projects due to the inability to recoup production costs,” said Director Tae Won Cha, Regional Director, Korean Copyright Commission Manila. “We hope this contest will inspire the new generation of film makers to boldly pursue their craft with passion and creativity, encouraged by the fact that steps are being taken to change the culture of infringement.”

Video entries much illustrate the dangers of illegally downloading copyrighted content. When audiences use infringing torrent sites to download movies, TV shows or music, torrent users place themselves at risk of malware, identity theft and illicit content. It must also promote the There are legitimate streaming options for films, TV and music. Avoid using valuable bandwidth to support illegal online activities.

“The Philippines is now considered a leader in ASEAN for efforts to safeguard intellectual property.  Through this contest, we hope to spread awareness about the importance of protecting creativity, and also give a Filipino filmmaker the chance to work with some of the world’s greatest talent in California,” said Brian Breuhaus, Economic Officer, United States Embassy Manila. “We support the Philippines’ efforts to protect creative industries so future generations can enjoy the fruits of intellectual property, whether in movies, games or music.”

The first 90 video submissions will each receive a free limited subscription to a video-on-demand service, either from Blink, HOOQ or iflix. The RAMP-PH Grand Prize Winner will be awarded an all-expense trip to Los Angeles, California, U.S.A. to represent the Philippines in the 5-day long Film Immersion Program conducted by film industry experts. While, five (5) Runners-up will each receive one copy of the Cyberlink PowerDirector 14 Ultra software, as a consolation prize.

An IPOPHL Special Award of PHP 10,000.00 will also be given by IPOPHL to the winning entry that best incorporates the message of building respect for intellectual property in the Filipino family.

Additionally, the entry that garners the most number of likes on the RAMP-PH Facebook Page (https://www.facebook.com/rampph2016/) will win one Canon VIXIA HF G20 HD Camcorder.

Submission of entries will be open from 01 May to 06 August and awarding will be in September 2016. To find out more details about the contest, visit the Rise Against Movie Piracy Facebook Page at https://www.facebook.com/rampph2016/.

Belkin launches the first “Belkin Academy” in the Philippines