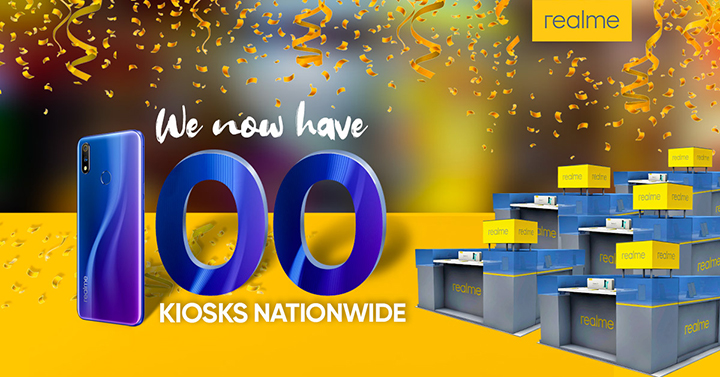 Fast-growing smartphone brand realme Philippines opens its 100th kiosk in the country at Pacific Mall Legazpi, hitting 50 percent of its target of 200 stores and kiosks for 2019 set last month. With the brand’s aggressive expansion plan, Filipino realme fans can expect 100 more stores and kiosks in the next six months. In addition to 100 kiosks, realme Philipines has opened five concept stores nationwide, a testament to the brand’s commitment to broadening its offline channels for all of its Filipino customers.

“We at realme Philippines continue to broaden our channels for our Filipino customers, making it even more convenient for them to avail of the real value we offer. We are optimistic that with our stronger offline presence, more Filipinos will be joining the realme squad. If you’re ready to enjoy an elevated, high-tier smartphone experience at an attainable price point, we would be more than happy to welcome you into our stores,” shares realme Philippines Marketing Lead Eason de Guzman.

Realme is now present in almost all of the major malls in the Philippines. With its presence in the National Capital Region established, realme Philippines is strengthening efforts to broaden its reach in key cities outside the NCR. The rapid retail expansion of realme Philippines is considered remarkable as it’s been in operations for just nine months. Besides expanding its offline presence, realme is furthering its digital reach to Filipino consumers through its partnership with e-commerce platforms Lazada, Shopee and Argomall.

The opening of the 100th kiosk is part of the realme Brand Month celebration this July, a month-long festivity launched at SM City Fairview last June 29. The Brand Month is also filled with promos, one of which is “Dare to Leap” wherein smartphone users who aim to switch to real value could score a PHP 500.00 discount on a realme C2 once they present their current mobile phone. Until July 31, purchasers of realme 3 also get the chance of having their families experience real smartphone value as realme Philippines is giving away 10 realme 3 smartphones to one lucky winner.

Realme is also hosting a stream-for-a-cause online event, aiming to receive star donations from fans, which will then be converted to cash for the benefit of Valeriano Fugoso Memorial School in Marikina City. The charity streaming will be having its final leg this Friday, July 26, with famous gaming streamers like Akosi Dogie and Suzzysaur.

Digital privacy fatigue: with data concerns on the rise, 1-in-3 don’t know how they can fully protect their privacy online