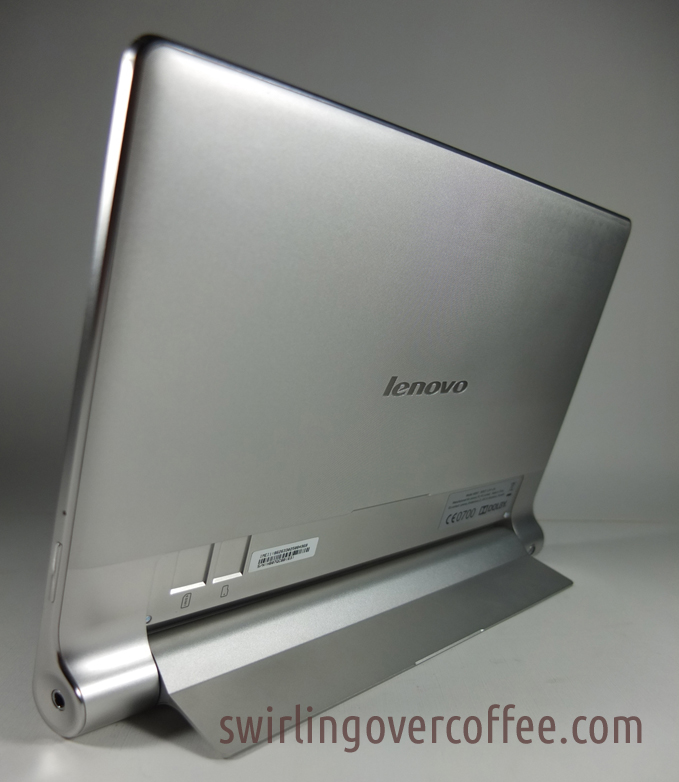 The Lenovo Yoga Tablet 10 is one attempt at design distinction. It looks nothing like the thin slabs of plastic picture-frame-looking tablets flooding the market: just look at it – that cylindrical base houses the batteries, serves as grip-hold, provides kick-stand support, and raises the tablet when on a flat surface, for easier on-screen typing. 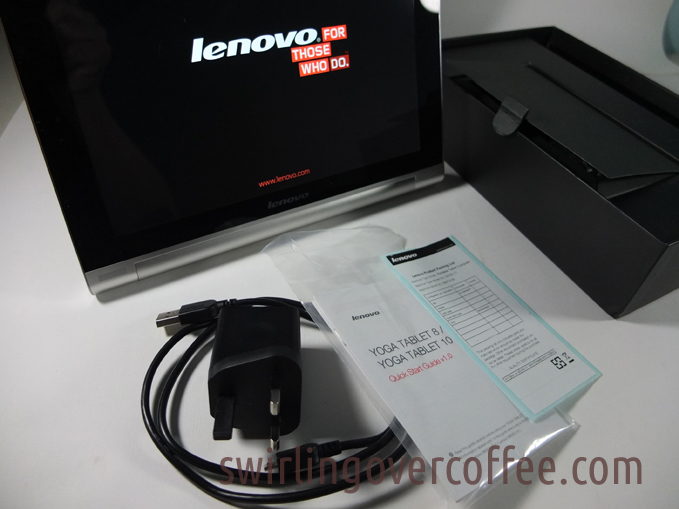 It’s as though an engineer went through dozens of case studies on how people actually use their tablets, and then sketched re-moulded to suit those uses. 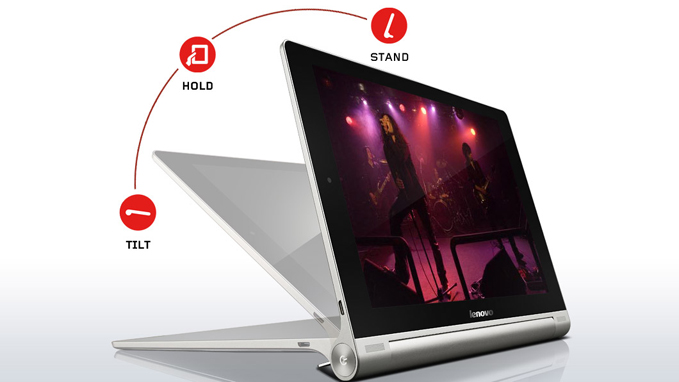 These, essentially, are those usage scenarios, which fit the “modes” that the Yoga Tablet 10 can change into.

After the launch of the Lenovo Yoga Tablet 8″ and 10″ – where I was blown away by how beautiful both the can-stand-on-their own Yoga tablets looked – I’ve been loaned a review unit. And more than two weeks of usage really gives you a grip on things. 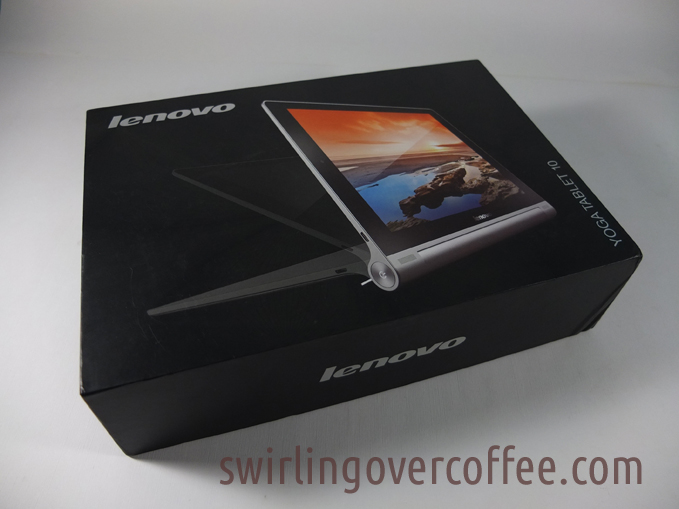 The cylindrical base (when in stand mode) acts like a book spine (when in hold mode) and houses the tablet battery and serves as grip for comfy reading. The spine also hides a kickstand you can pull out to allow for picture frame pose (stand mode). When the Yoga Tablet 10 is laid flat on the table, it’s not flat. The spine and kickstand raise one end of the tablet for glare reduction and comfy on-screen typing. 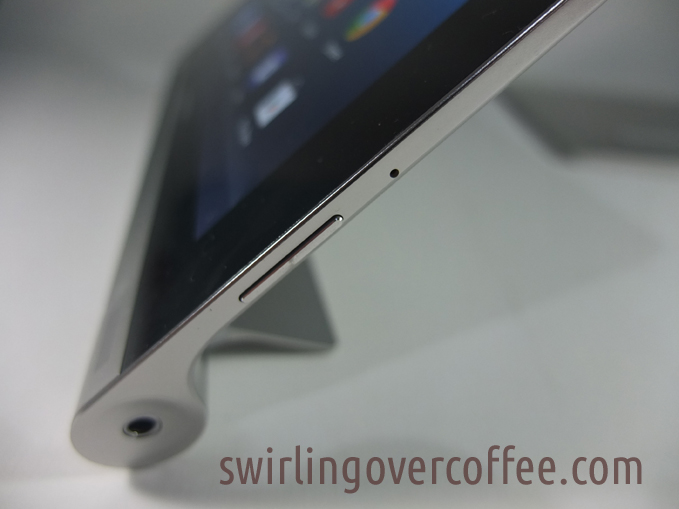 That’s the most the Yoga 10 can lean back when in Stand mode, any more and it falls over. The slightly protruding metal button on the side is the volume rocker, aptly placed since you’ll be using that often when doing movie marathons on the Yoga 10.

Sturdy build – a mix of aluminum and polycarbonate with a silver finish. 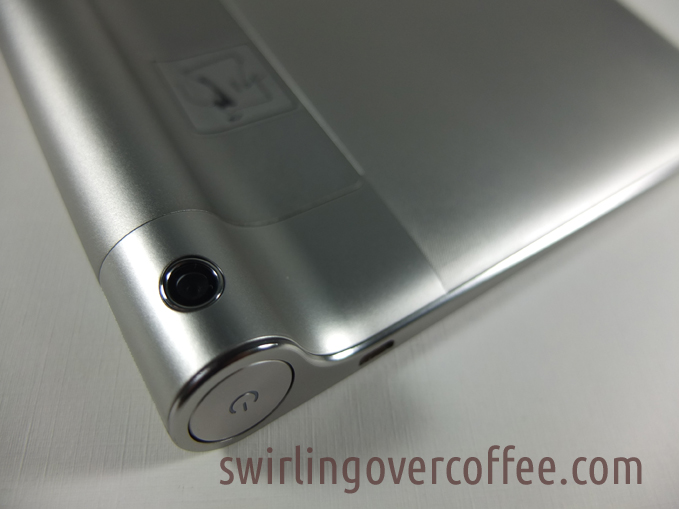 That tube above contains the battery, serves as grip when in Hold mode, and as raised end for easier typing during Tilt mode. The black circle is the rear camera, which as rear cameras on most tablets go, is only as good as the surrounding ambient light.

Okay battery life. I stopped timing after 11 hours. Lenovo says the Yoga 10 can reach up to 18. I don’t doubt that. 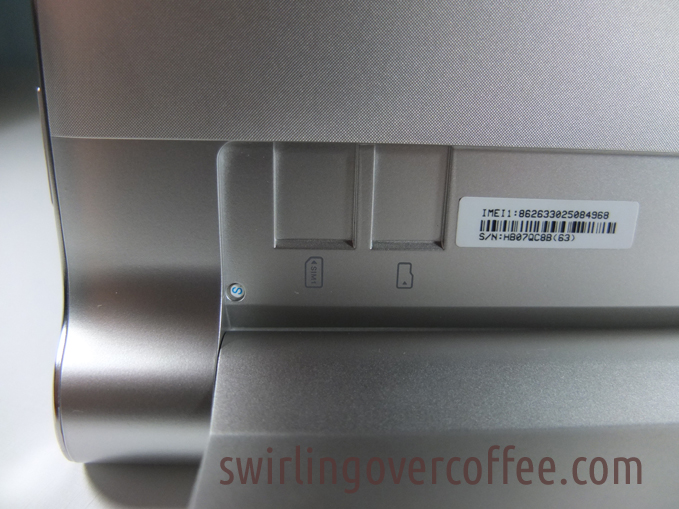 Includes a SIM tray slot, so you can ditch your pocket WiFi and still go online. 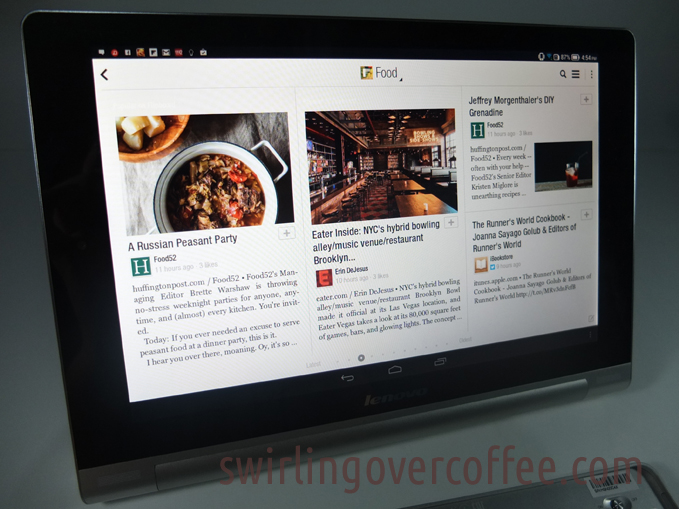 You’ll be doing a ton of surfing and reading on the Yoga Tablet 10, because Stand mode practically exists for that.

Kickstand encourages stand mode usage, which is great for movie marathons, Facebook and reading while eating. Presentations are easier, too, since all you need to do is pull the kickstand out and prop the Yoga 10 facing your audience. 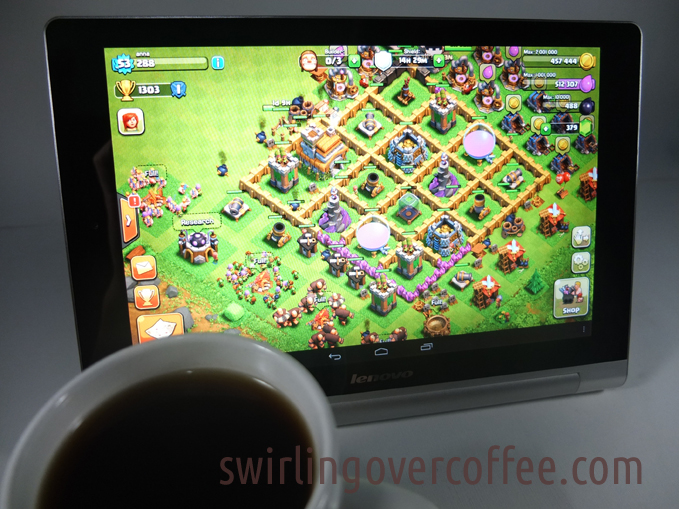 Slight memory hog games like Clash of Clans showed problems on other tablets I reviewed, like the ASUS MemoPad 7, which got hot and immediately shut down after a few minutes of Clan war. Nothing of the sort happened on the Yoga Tablet 10. Ah, yeah, that’s coffee.

Can run graphically demanding games, like Dead Trigger 2, though slightly odd to hold because of that spine. 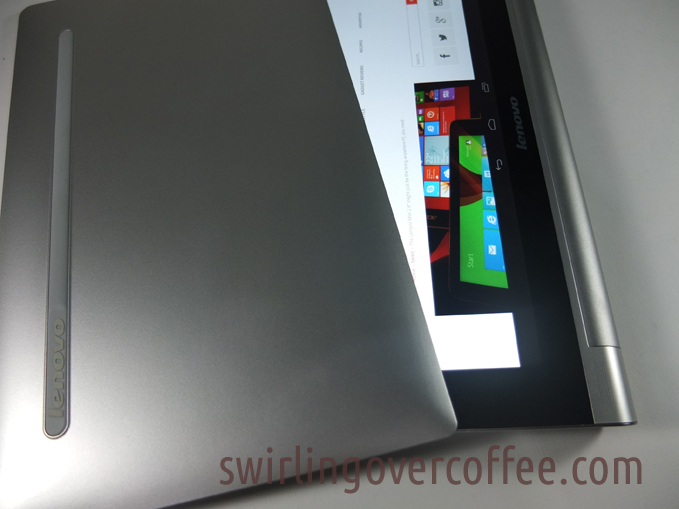 Sold-separately Bluetooth keyboard cover acts as sleeve that protect the Yoga Tablet 10’s screen. This keyboard is also very responsive (no skips or lags in input). 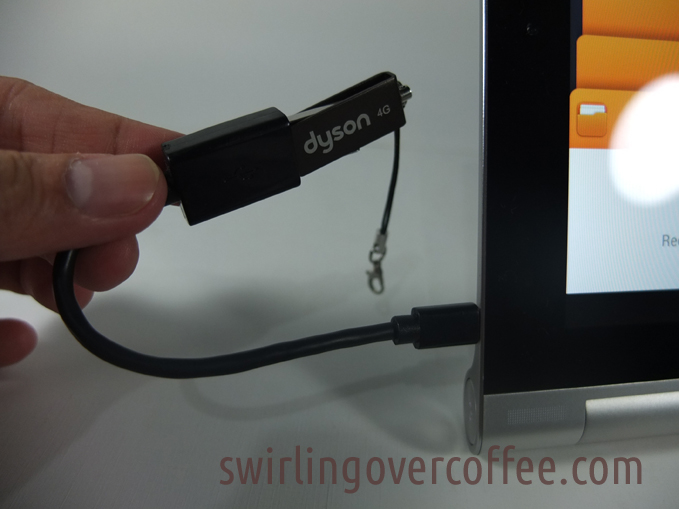 Micro USB port accepts USB OTG so it can recharge other mobile devices, so it’s like bringing a tablet and a powerbank, in one. That means, if the Bluetooth keyboard dies on you, you can charge it via the tablet. 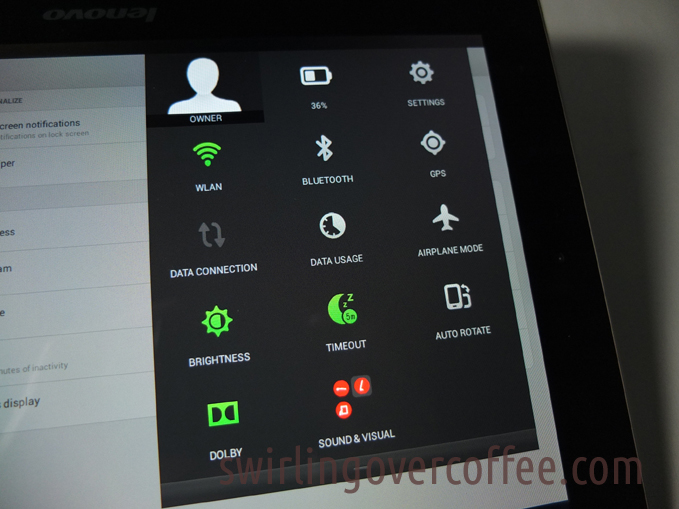 The UI is re-thought for tablet use and is actually utilitarian. 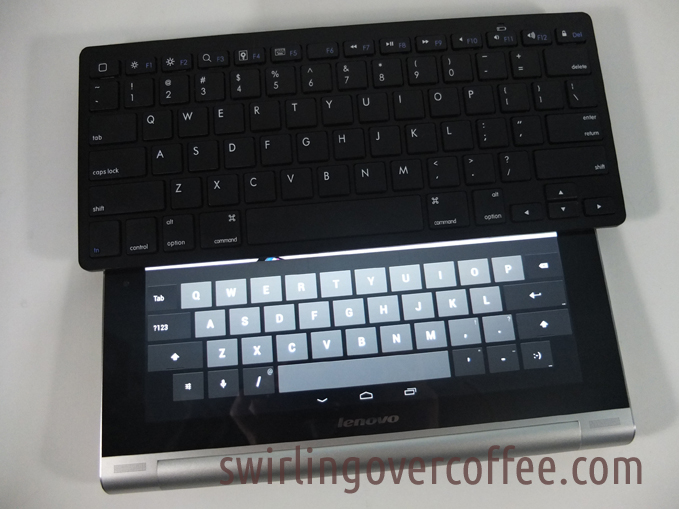 The on-screen keyboard of the Yoga Tablet 10 is very near to the dimensions of a full-sized (Bluetooth) keyboard, as shown above. 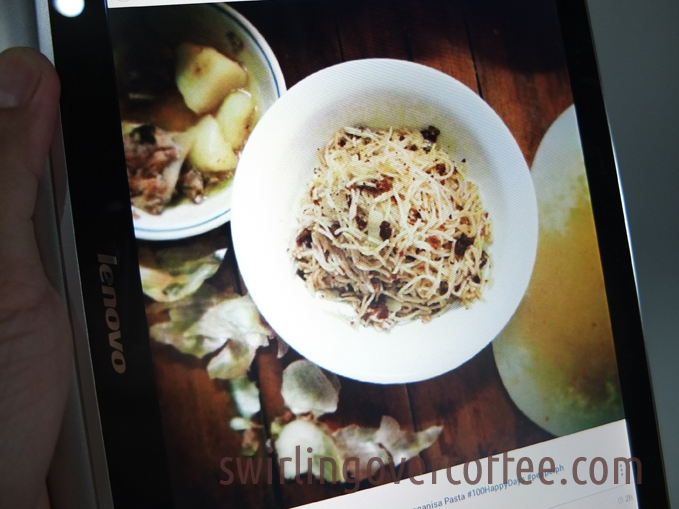 Display resolution and pixel density are behind those of other manufacturers. If you’ve seen an iPad Air or the LG G Pad 8.3, do not expect that visual vividness here. Also, there are hints of color oversaturation to compensate for the not so good display. 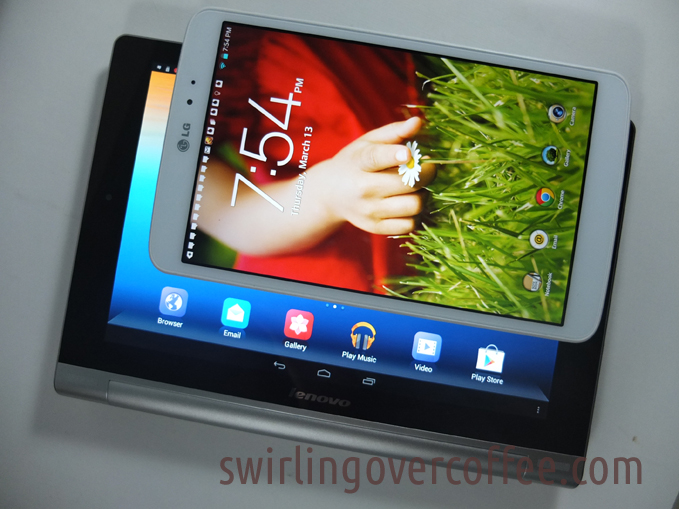 That’s the LG G Pad 8.3 laid on top of the Lenovo Yoga Tablet 10. The G Pad, as you can see has a better, more vivid display, and costs the same as the Yoga 10.

Slightly heavy and chunky because of the spine – if you’re used to slim and light tablets, this may not be your thing. 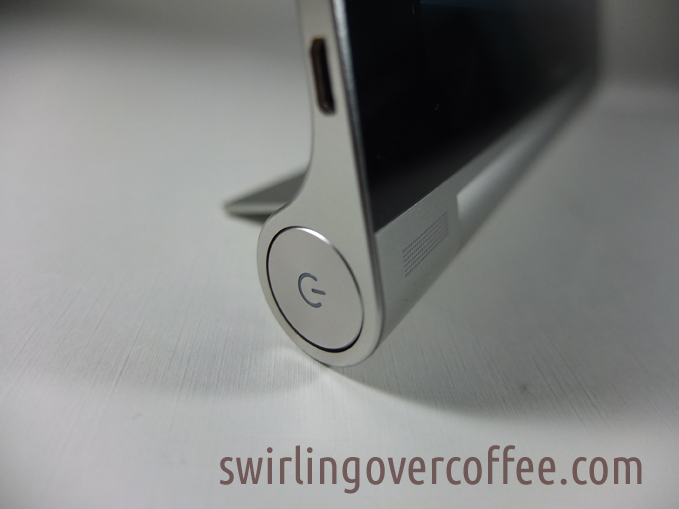 The power button (see above) can be awkward to reach – it’s on the left side of the tablet when it’s on stand mode. 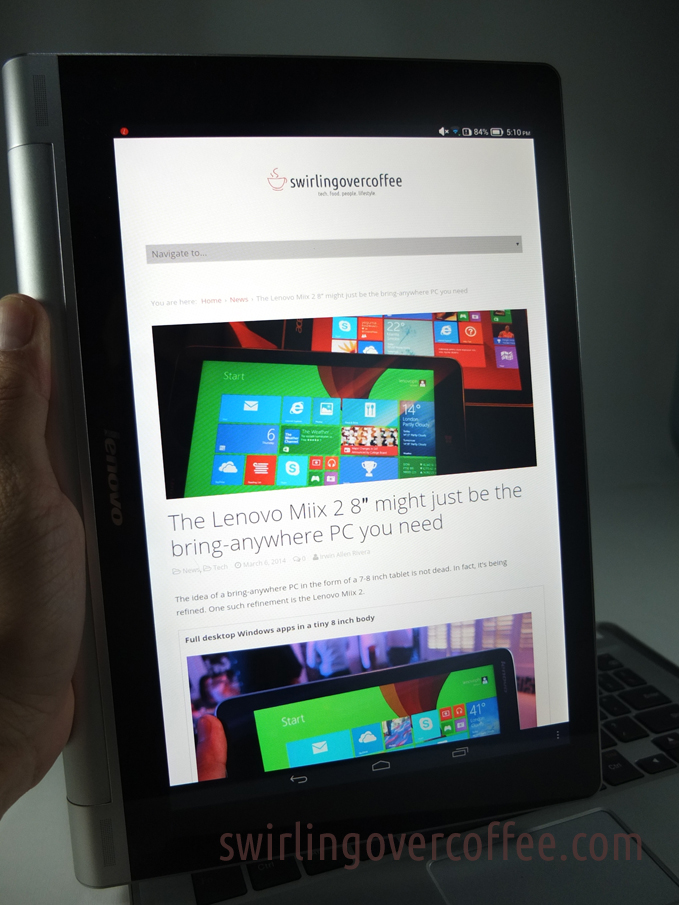 Can feel sluggish once many apps have been loaded. You need to keep killing apps in the background to speed up performance. When you warm up to the Hold and Stand Modes, you’re bound to get greedy and you’ll keep loading apps and switching between them. Mistake: the Yoga 10 is not the speediest tablet out there. But you can get used to this, the same way I got used to the same problem on a smartphone. 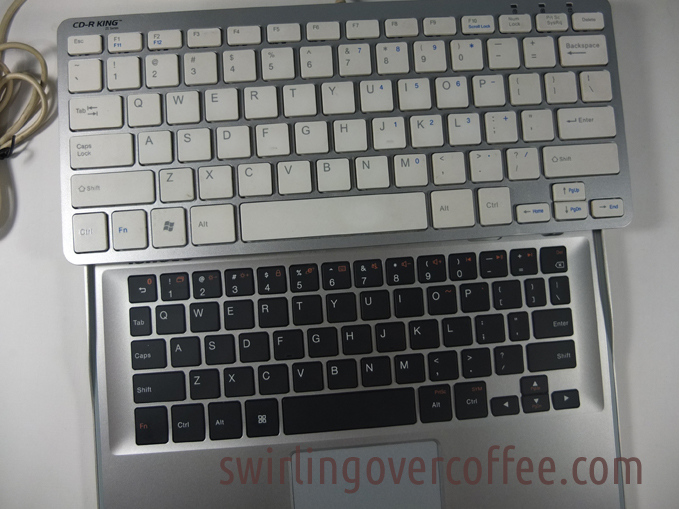 The Yoga Tablet 10’s Bluetooth Keyboard Cover juxtaposed with a full USB keyboard. Don’t be misled here – the Keyboard Cover is just as comfy to use – it’s spaced okay – unless every finger you have is as big as your big toe. 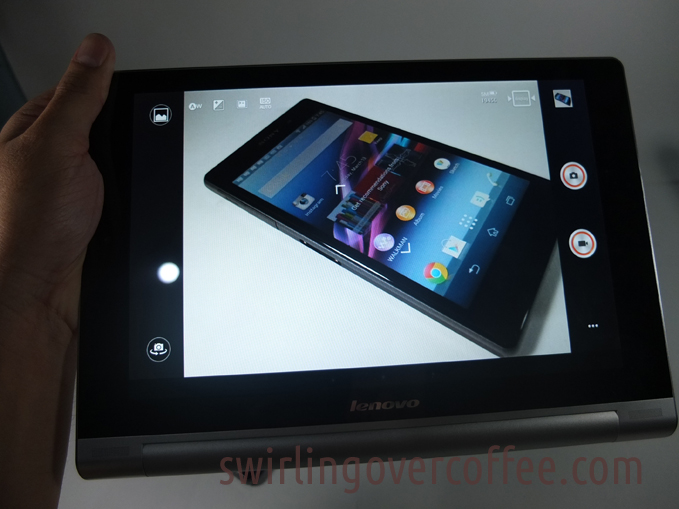 Rear camera is only okay, and gets worse in proportion to the amount light you have. But then, it’s VERY RARE to find a tablet with a good rear camera. 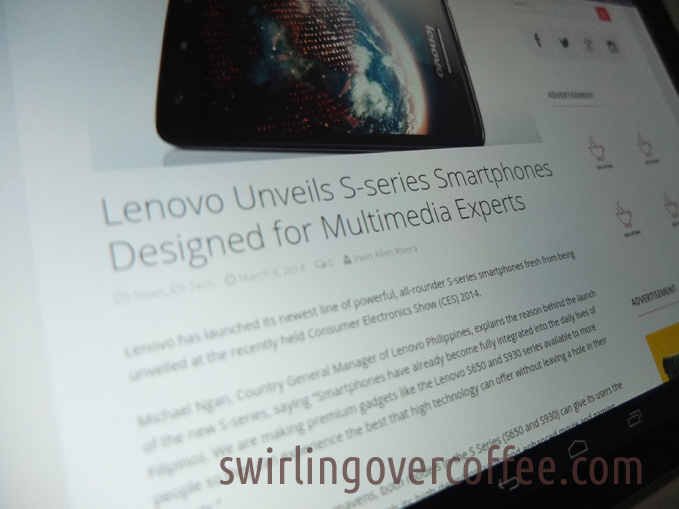 While viewing angles on the Lenovo Yoga Tablet 10 are great, fonts tend to be pixelated. See close up below. 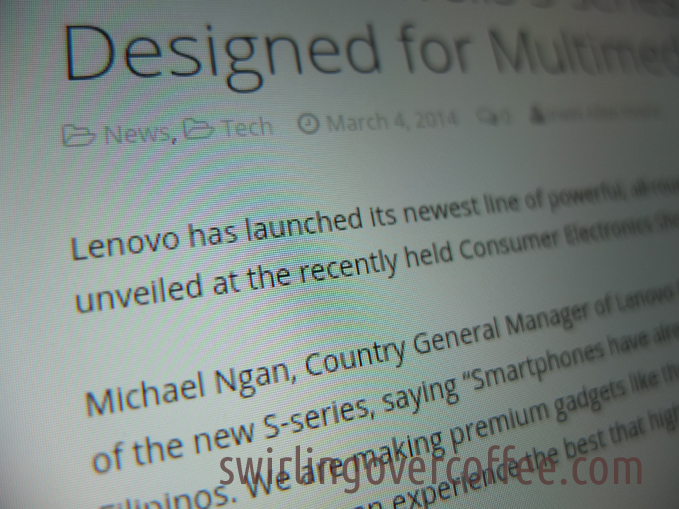 Lastly, the Lenovo Yoga Tablet 10 is priced the same as a better spec’d, smaller, and easier to bring LG G Pad 8.3. 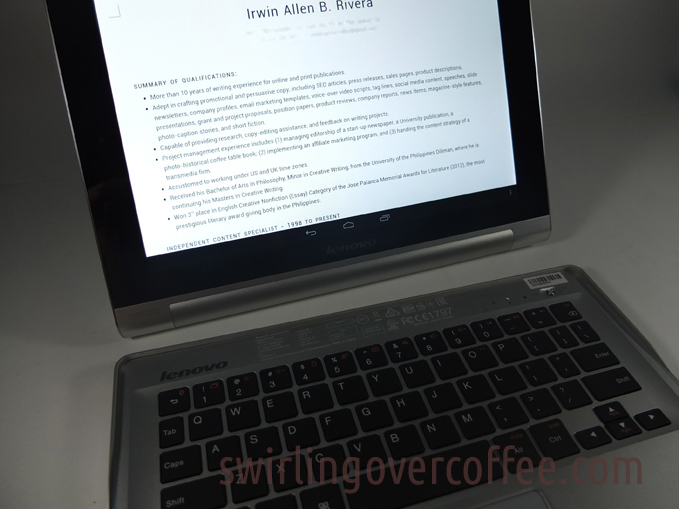 Because of the tandem between the tablet with its own kick-stand and a Bluetooth keyboard, the Yoga Tablet 10 can be used as a laptop. I punched in some edits to my résumé right there. 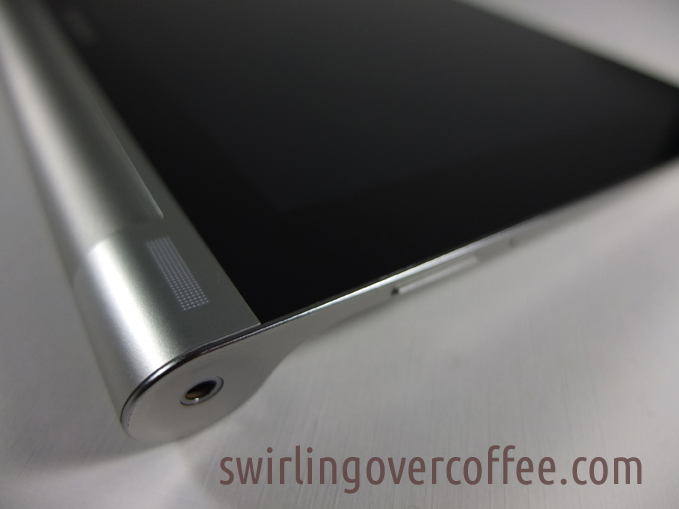 The spine-cylindrical base really dominates every usage aspect of the Yoga Tablet 10, so it’s a love it or hate it right there and then.

The Yoga Tablet 10’s modes “work”, if only because the tablet’s spine FORCES you to set the Yoga 10 in one of three modes. 10 inch tablets can be cumbersome. So Lenovo threw in a kick-stand. It works. Set it on a table like a picture frame. Hands-free movie watching. Holding a 10 incher in portrait mode for long reading isn’t so nice. So Lenovo enlarged one end for better one hand grip (and used that enlarged portion to house batteries). Ok, but the tablet is still heavy owing to its 10 inch form factor. So you’ll end up putting the tablet down anyway. Works, but not so well. Typing on-screen isn’t always comfy when the tablet is flat on a table and you get so much glare. So Lenovo raised one end. It works.

But you know what else works? This: 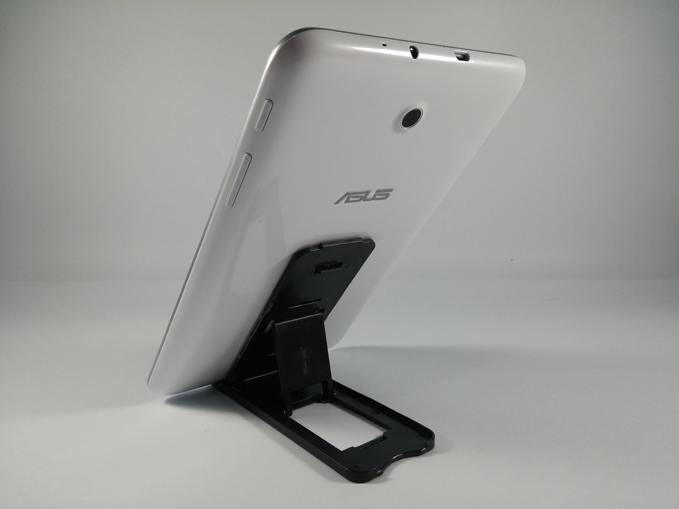 You can buy that tablet stand for P80.00 at CDR-King. Tablet shown is the ASUS MemoPad 8, forthcoming review.

I wish, and this is just me, that instead of throwing in that spine-battery-house-kick stand, Lenovo could have jacked up the specs and display of their 10 incher, this is what LG did with their LG G Pad 8.3 – the body is still a bit plasticky but the specs and display will blow you away. Knowing Lenovo’s history with sturdy products – the ThinkPads I’ve reviewed (here and here), for example, are annoyingly sturdy – I would love that better spec’d Android tablet from Lenovo. They can do it. 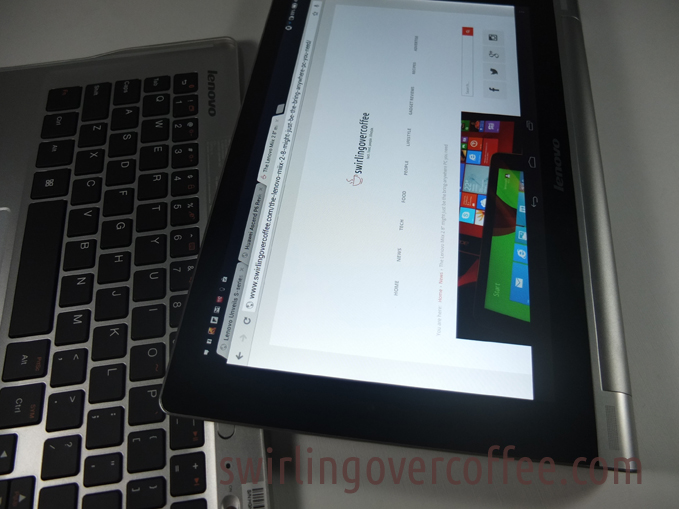 They’re already doing a good job with the Lenovo Vibe Z after learning from the K900. I know they’ll come out with a better spec’d 10 tablet soon.

Lenovo A7000 Plus Review – Good Cameras, Build, and Performance for Under P9,000

JBL Joins Consumers in Celebrating Their Passions with #AmplifyPassion