Want to cut down on your electric bill, help conserve energy, and reduce carbon emissions in your home? #MayMagagawaKa.

Lighting accounts for 20-30% of a Filipino household’s monthly electric bill. According to Phillips, switching to LED lights have vital benefits: 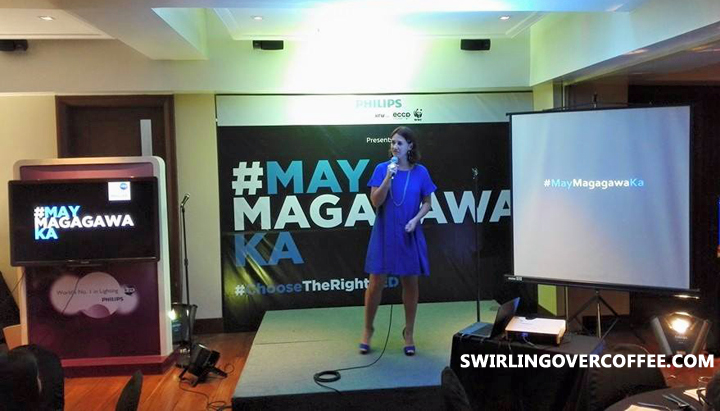 Switching to Philips LED lights is the smart energy choice – “Imagine,” said Fabia Tetteroo-Bueno (above), Country Manager of Philips Philippines, “what would happen if we practice smarter energy choices in everything we do?”

To help promote smart energy choices and encourage Filipinos to save energy – to mange the power shortage this summer and in the years to come – Philips Philippines launched the #MayMagagawaKa campaign.

As part of the campaign, Philips launched an online video series on Facebook and YouTube featuring real-life testimonials from Filipinos whose lives are affected by power shortages – small business owners, tricycle operators, employees, and homeowners. Philips also partnered with graphic design studio Team Manila Lifestyle to create limited edition shirts which you can get with every purchase of Philips LED lights in participating stores.

The campaign is jointly organized by Philips, Deutche Investitions -und Entwicklungsgesellschaft mbH (DEG), World Wide Fund for Nation (WWF) Philippines, and the European Chamber of Commerce of the Philippines (ECCP).

Play Oppo's racing game, a la Fast & Furious 7, to win an Oppo R5 and other items

Show Your Mom She’s Your Number One