More than just engines of economic growth, businesses are also powerful drivers of social change. Enterprises can lead social transformation in several ways, such as by turning inventors into entrepreneurs or by fostering sustainable ways for communities to meet different challenges.

Many local businesses are beginning to tap science and technology as sources of creativity to solve urgent social problems. In turn, the results strengthen local economies through more profitable jobs and higher quality products.

“Innovation and local entrepreneurship play an important role in achieving inclusive growth and improving the lives of those in the margins,” said Dado Banatao, chairperson for the Philippine Development Foundation (PhilDev), a non-profit organization dedicated to progressive entrepreneurship. 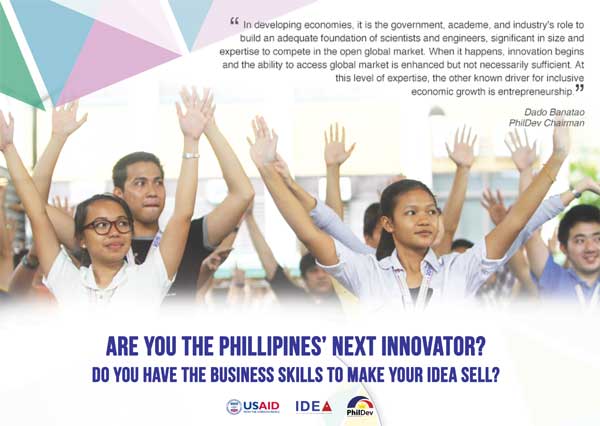 As a way of helping thinkers and innovators pursue social responsibility, the PhilDev Foundation, in partnership with the United States Agency for International Aid (USAID), is holding its third IDEA Global Entrepreneurship Symposium to spur science-based entrepreneurship in the Philippines. The symposium will gather leaders from different sectors to discuss topics such as emerging industry trends and the different opportunities for startups.

“Through the IDEA program, PhilDev encourages scientists, engineers, and inventors to go into business and create innovations that impact local communities,” Banatao said.

The symposium supports the efforts that many local businesses have made to lead change and sustainability in local communities. Here are a few notable examples that are creating positive impact in the Philippines:

Engineer Aisa Mijeno’s SALt lamp can run for eight hours with only tap water and two tablespoons of salt. With minimal carbon footprint and no harmful gases, this innovative lighting solution offers a safer, more environmentally friendly alternative for communities that continue to rely on kerosene and battery-powered lamps. The lamp can also charge smartphones in the event of an emergency.

The SALt lamp has received several accolades including the Asia Entrepreneurship Award in 2015. Considering itself as a social movement, SALt is currently making efforts to light up communities in Oriental Mindoro, Iloilo, and Kalinga. During the APEC SME Summit, Mijeno has had the chance to talk about the SALt lamp in a discussion moderated by US President Barack Obama.

Founded by Entropy Resins co-founder and advisor Dr. Rey Banatao, Connora Technologies has received awards and recognition for the Recyclamine, the world’s first recyclable epoxy resin system. The Recyclamine allows the recovery of high-value materials such as carbon fiber, fiberglass, and Kevlar from composite waste so they can be recycled and repurposed, enabling manufacturers to save on costs during the production cycle.

By championing Philippine specialty coffee, Kalsada Coffee sees itself as a supporter of local coffee producers. As a way of supporting local farmers in the production of exceptional coffee, the company pays their growers a minimum of $2.50 per pound, which exceeds the Fair Trade Labeling Organization (FTO) standard of $1.40 per pound. The growers are also given training and equipment to help improve the quality of their produce.

Kalsada Coffee is also promoting more eco-friendly ways of producing coffee. For instance, the company’s growers only use compost and chicken dung as fertilizers. The coffee plants are also grown in sustainable, biodynamic ecosystems and processed using equipment that wastes as little water as possible.

For more details about the event, log on to http://www.phildev.org/idea-symposium-and-workshop-2016.

Be Cool and Colourful with Goldilocks Strawberry Caramel Thirst Quencher

OPPO Remains a Top Player in the Philippine Smartphone Industry