More space on your table, power efficient, value for money. 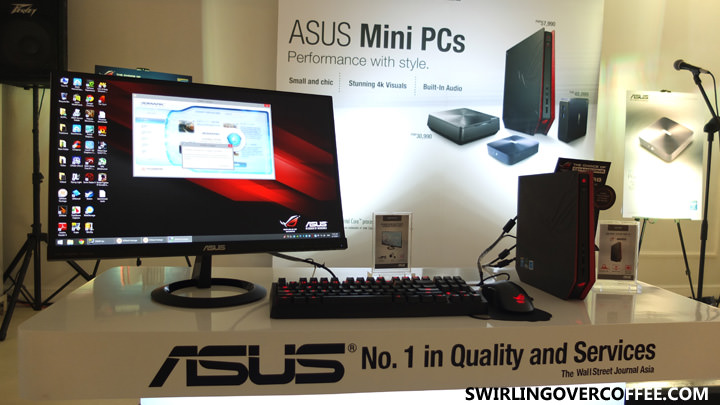 ASUS MiniPCs mean more space in your workspace (less bulk, easier to move around when cleaning). Small doesn’t mean less powerful. You’d be surprised. Full specs at the end of this post.

Play Without Limits: the ASUS Republic of Gamers (ROG) GR8

Compact and powerful, the ROG GR8 blends console size with gaming PC specs. With has a chassis with a volume of only 2.5 liters, and running on an Intel Core-i7 processor and an Nvidia GTX 750Ti graphics card, the ROG GR8 is more than adequate to run the latest games in high detail and at 1080p resolution. It also incorporates ROG gaming features such as the Sonic Radar II, GameFirst III, and Sonic Studio.

The ROG GR8 comes with an ASUS M801 mechanical keyboard and an ROG Gladius mouse and is available at PC Express, Villman, Thinking Tools Cebu for SRP PhP 57,990.

Occupying a space smaller than an A4 paper, the VivoPC is perfect for inconspicuous placing – be it behind monitors or TVs via VESA mounts, underneath desks, or simply on tabletops.

Though smaller than the VivoPC, the VivoMini skimps on neither performance nor functionality. It runs on Intel Core-i processors with 4GB of RAM which can be upgraded to 16GB. It utilizes a 32GB mSATA SSD which is also upgradeable to 256GB. The VivoMini supports 4K and up to three independent displays. It also operates silently, generating only 18.5dB and consuming 6.95W at idle. Price and availability to be announced.

The perfect partner for those looking out for the best Chrome OS experience, the ASUS ChromeBox blends efficiency with formidable hardware. Google’s Chrome OS promises speed with constant updates in security, supported with a wide variety of applications. This little box is powered by an Intel Core-i7 processor for speed, further complimented with 4GB of RAM and 16GB of SSD storage. The ASUS ChromeBox is priced at SRP P49,099.00; availability to be announced.

Here are the full specs for each ASUS MiniPC.

Globe lines up the biggest events this summer

Manulife’s Career Orientation Program - Learn how you can find a career with purpose, growth, and exciting possibilities

Greening the Future by Upcycling One Junk at a Time

The power of coming home: A Filipino company encourages employees to go home early to be with their families