What was once only a dream of bringing esports all over the Philippines is now about to become a reality, as the 2015 E-Sports Tour (EST) is set to take off this weekend, June 27-28, at SM Clark, Pampanga. Born out of the fusion of ideas between Mineski-Events Team and Gariath Concepts, the EST seeks to take esports to the fans themselves through three separate jam-packed weekends slated to take place throughout the year, one in Luzon, one in Visayas, and one in Mindanao, where fans from outside the Metro can finally meet and watch their favorite local esports stars and personalities.

“We at Mineski believe that there is so much more to the PH esports community than that we mostly see in Metro Manila. So when Gariath Concepts came to the Mineski-Events team pitching a
project based on the idea that instead of making Filipino gamers outside Metro Manila to make the long trip here just to enjoy and participate in premier local esports events, we should just bring the action to them, we immediately agreed as this is very much in line with our own advocacy of connecting gamers all over the country.”

The first of three legs, EST Clark offers to deliver non-stop Dota 2 and League of Legends fun, two of the most popular competitive gaming titles in the country right now. The first day, June 27, is dedicated to Dota 2, and is top billed by the much-awaited battle between Mineski-Dota and TNC Pro Team in the grand finals of the Mineski-Pro Gaming League, considered the most prestigious esports league in the Philippines. On the line here is so much more than just the 70,000 Php reward reserved for the victors, but also the right to be called the best Dota 2 squad in the country right now. 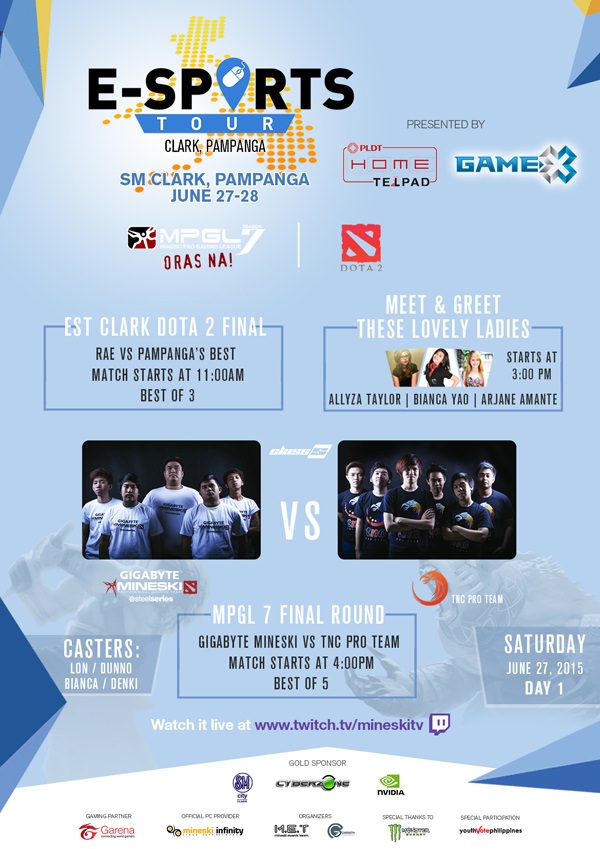 Meanwhile, the second day, dedicated to League of Legends, will feature four teams who topped an earlier qualifier held at Angeles, Pampanga battling it out for the right to take on Mineski-LoL in a showmatch, to be played onstage with the home crowd cheering them on. 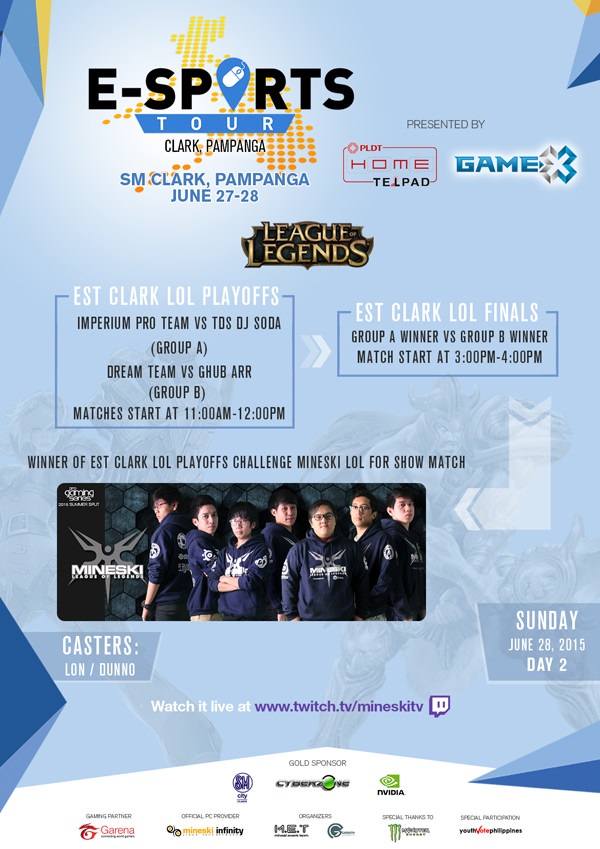 Gates open at 10 AM for both days, so make sure to be there as esports history in the country is rewritten anew.

This event would not be possible without its main presenters PLDT Home TelPad and Smart GameX, its gold sponsors SM City Clark, Cyberzone, and Nvidia, its official gaming partner Garena, its official PC provider Mineski Infinity, its official organizers Mineski-Events Team and Gariath Concepts, with special thanks to Monster Energy Drink, as well as Youth Vote Philippines.