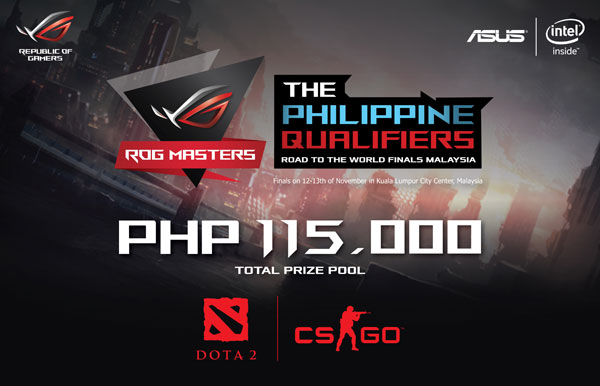 Manila, Philippines (AUGUST 30, 2016) – ASUS Republic of Gamers (ROG) the world’s undisputed no.1 gaming brand is proud to announce that the ROG Masters 2016 Philippine qualifiers is now open for registrations for both DOTA 2 and Counter-Strike: Global Offensive (CS:GO). The ROG Masters is an action-packed and exciting gaming event that challenges both professional gamers and enthusiasts to show what they got in terms of strategy and tactics in games like DOTA 2 and CS:GO. The ROG Masters is considered as one of Asia’s largest eSports tournament with a grand prize amounting to $200,000 for the world championship and PHP 115,000 for local qualifiers.

Starting August 30 until September 9, gamers and interested participants all over the country can register their teams through the official ROG Masters Philippine qualifiers microsite http://rog-masters.ph/. From September to October 2016, DOTA 2 and CS:GO Philippine teams will battle it out in a series of local qualifiers for a spot in the ROG Masters grand finals which will be held in Kuala Lumpur, Malaysia from 12th to 13th November, 2016.

ROG Masters comes to the Philippines with the local qualifiers happening for DOTA2 and CS: GO teams.

Online and on-ground qualifiers will take place for each game. From every qualifier top teams will advance to local LAN finals which will happen in a premier gaming hub around Metro Manila on either September 17 or September 18, 2016.

The top 2 teams of Philippine qualifiers for both DOTA 2 and CS:GO will get a slot in quarter finals alongside with other Asia qualifiers. Moreover, the other teams who will not qualify from Philippine qualifiers, can still participate in Southeast Asia (SEA) qualifiers by completing the team registration on the ROG Masters official site which can be accessed here.

Asia has dreamt. Asia has anticipated and practiced. Now, Asia is rising.

ROG MASTERS strives to uncover rising talent in the Asian DOTA 2 and CS:GO scenes and bring it into the international spotlight. Throughout the regional qualifiers the stars of tomorrow are given their chance to shine. The most substantial matches will be broadcasted live and provide the newcomers with a chance to demonstrate their skills to their fans and followers. The offline grand finals will mesmerize visitors and viewers alike as each regions‘ finest enter the arena and battle for the favour of the crowd and the glory of the grand prize!

“The Philippine eSports scene is starting to get really exciting day-by-day. Few months ago, we partnered with the Professional Gamers’ League (PGL) in mounting the world’s biggest DOTA 2 tournament series in country which is the Manila Major. And look, here we are now creating our own incredible gaming tournaments that aims to empower rising talents and future eSports local superstars as early as today,” shares George Su, Country Manager of ASUS Philippines System Business Group.

The ROG Masters Philippine qualifiers’ full gaming mechanics can be reviewed through this link.

About ASUS
ASUS is a worldwide top-three consumer notebook vendor and maker of the world’s best-selling, most award-winning motherboards. A leading enterprise in the new digital era, ASUS designs and manufactures products that perfectly meet the needs of today’s digital home and office, with a broad portfolio that includes motherboards, graphics cards, optical drives, displays, desktop and all-in-one PCs, notebooks, netbooks, servers, multimedia devices, wireless solutions, networking devices, tablets, smartphones and wearables. Driven by innovation and committed to quality, ASUS won 4,326 awards in 2014 and is widely credited with revolutionizing the PC industry with its Eee PC™. ASUS has more than 16,000 employees around the globe with a world-class R&D team of 5,200 engineers. Company revenue for 2014 was approximately US$14.5 billion.

Globe now blocks 100,000 per day spam/scam messages from other networks

A Year in Freelancer.com: How Millennials are Changing the World