Pointwest Technologies Corporation, one of the top IT-BPO companies in the Philippines, took home two awards from the recent 2015 International ICT Awards. The two awards Pointwest won were for the Best Filipino-owned Company of the Year and the Best Philippine Mobile App of the Year for “Arko.”

Pointwest won the Best Filipino-Owned Company of the Year when the award first came out during the 2014 edition of the International ICT Awards, making this the second year straight for the IT firm, a “two-peat,” as some circles will call it, to garner this plum award.

Founded in 2003 by pioneers of the Philippine IT-BPO industry, Pointwest boasts of being the largest IT-BPO company in the Philippines that is fully-Filipino owned, providing world-class IT services to top Fortune 500 companies. 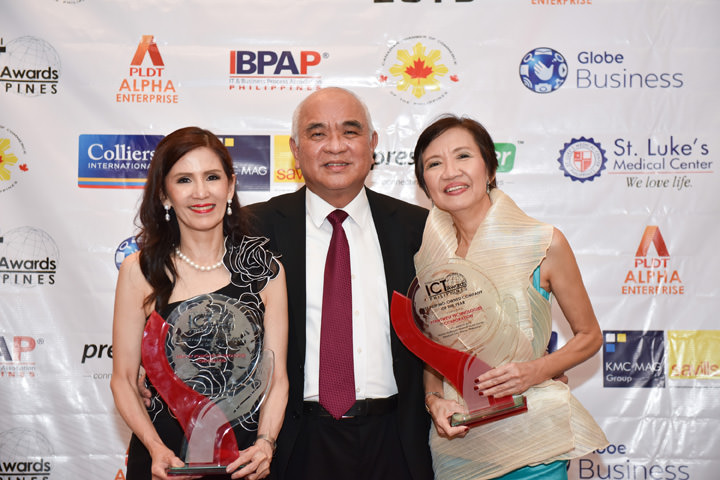 Pointwest was also recognized in 2014 as one of the 50 Leading Companies for Women in the Asia-Pacific Region in a report prepared by a ministry of the Japanese government for the Asia Pacific Economic Cooperation (APEC).

Pointwest has posted year-on-year growth alongside a growing client list. The company is headquartered at the Citibank Center in Makati, while its main Delivery Center is at the Pointwest Building in the UP-AyalaLand Technohub. It is set to open another delivery center in Ortigas. Pointwest also has satellite offices in the United States.

Arko, developed by Pointwest for the Department of Science and Technology’s (DOST) Project NOAH (National Operational Assessment of Hazards), is a flood and extreme weather monitoring mobile app. Arko is free for download in Google Play and Apple’s App Store.

In 2014, Arko won a spot among the 480 mobile applications screened by the World Summit Awards for mobile (WSAm). This was the first global recognition for the Philippines in the WSAm.

“Pointwest was founded on the belief that the Filipino IT specialist is a match for the best in the world, if not better,” Ma. Cristina G. Coronel, Pointwest President, said. “These wins by Pointwest affirm this belief of ours and inspire us to do more and continuously prove the caliber of Filipino IT worldwide.”

Your Most Important Asset Is The Most Vulnerable

HOOQ is now officially available for IOS and Android

One in Three Ransomware Attacks Target Business Users: Kaspersky and Interpol Call for Backups and Protection On

It’s Time to Ditch the Itch! Pet Food Institute shares tips on how pet owners can protect their pets from fleas this summer﻿