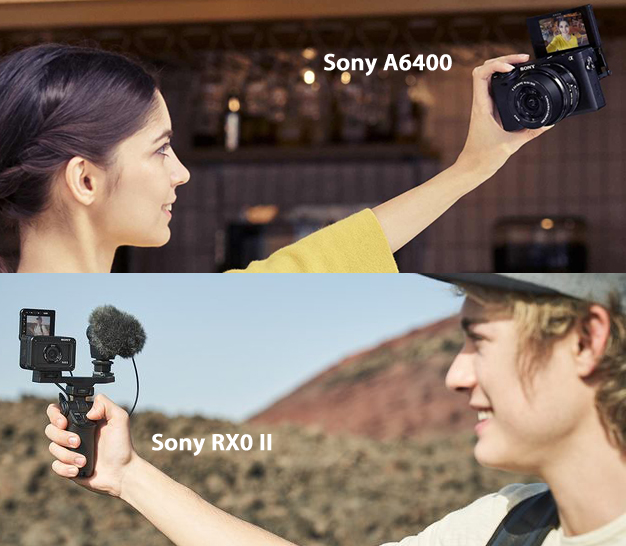 Sony’s new vlogging solutions include the RXO II (a compact action camera with a tilt-screen for vlogging) and the A6400 (a great interchangeable lens mirrorless camera that packs features vloggers need).

The RX0 II is for vloggers who need power, ruggedness, and portability. It can record 4K 30p video internally, features a 180-degree tilt-up LCD screen, has image stabilization for videos, is equipped with an advanced image processor that allows Eye Autofocus (and delivers beautiful skin tones), and packs a 1-inch sensor in its compact chassis. The RX0 II has a tough, rigid body that’s waterproof up to 10M (body only), shockproof up to 2M drop, and crush-proof up to 200 kg weight.

Here’s a features overview of the Sony RX0 II.

The Sony RX0 II sells at 35,999 (cash price) and is best-paired, if you’re serious about vlogging, with the sold-separately accessories including a Shooting Grip and a Shotgun Microphone. See all compatible RX0 II accessories here.

Sony A6400 – packed with features for pro Vloggers

While the RX0 II focuses on portability and some focused features, the A6400 is a clear step toward becoming a pro vlogger. With a fast 0.02s AF and 425 phase-detection points, the A6400 can detect and hold on to moving subjects, while its Real-time Tracking and Real-time Eye Auto Focus produced sharp focus results for action shots. This large, APS-C sensor sized, 24.2 Megapixel, 11 Frames per second, and ISO 100- 3200 camera (with its latest image-processing engine) captures great low light photos. The A6400 also comes with Super 35 mm format recording with 2.4 times oversampling results in 4K movies (QFHD: 3840 x 2160) with extraordinary image quality.

Here’s a features overview of the Sony A6400.

Both the RX0 II and A6400 are now available in stores.

Globe Extends Bill Payment Due Dates up to May 15

KATA Promos for the Month of May

The Beauty of the Philippines, Through the Eyes of 7 Foreigners