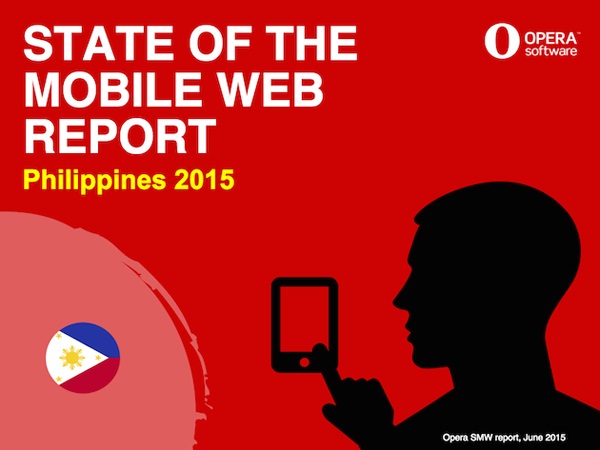 The State of the Mobile Web report is based on aggregated infor mation obtained from Opera Mini servers. The servers compress webpages and reduce them to as little as 10% of their original size before sending them to an Opera Mini user’s device. In June 2015, Opera Mini’s servers processed 24,575 TB of data and served over 160 billion pages. More than 250 million people around the world use Opera Mini for a faster web experience and to get the most out of their mobile data usage.

The Philippines has the eighth-largest Opera Mini user base in the world and the second-largest in Southeast Asia. The user base increased by 41% over the past year, while its smartphone user base surged by 90%. The report released today provides a definitive analysis of the key trends affecting the mobile web in Philippines. Here are some highlights:

Mobile web usage is growing in the Philippines

The number of page views increased by 62% over the year. Each Opera Mini user browses 638 webpages on average per month. This is higher than the average for overall Opera Mini users, which is 615 pages.

It is all about social

Mobile internet users in the Philippines have highest social-media activity in the world. In all, 86% of page views by Opera Mini users in the Philippines are on social-networking sites, the highest percentage among the top-50 Opera Mini user countries. Facebook clearly dominates. Twitter, WordPress, tumblr, Pinterest, and Flirchi also in the list of top-20 most visited sites. 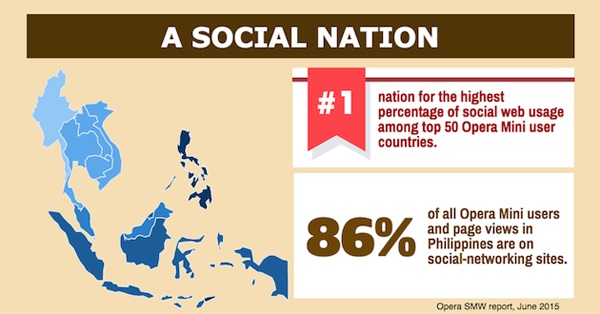 “The prevalence of the smartphone is driving internet usage in the Philippines,” says Eiko H. Raquel, Country Manager for the Philippines at Opera Software. “Filipinos love to share things with friends and families. This country used to be the text-messaging capital of the world. Now, with easier internet access and higher smartphone adoption, the Philippines has not only been crowned the “selfie capital of the world” by Time magazine, but also has now been ranked as  the most social nation” by Opera.”

Opera enables more than 350 million internet consumers worldwide to connect with the content and services that matter most to them. Opera also helps publishers monetize their content through advertising and advertisers reach the audiences that build value for their businesses, capitalizing on a global consumer audience reach that exceeds 1 billion. Opera is a trademark of Opera Software ASA.

Get the best deals on books plus loads of treats and cashback offers only with PayMaya at the Big Bad Wolf Book Sale Pampanga!

Haier is Chillin’ Summer Until June 30!

The Sweetest Game Around

Love, Basil: A Valentine’s Concert with a Heart