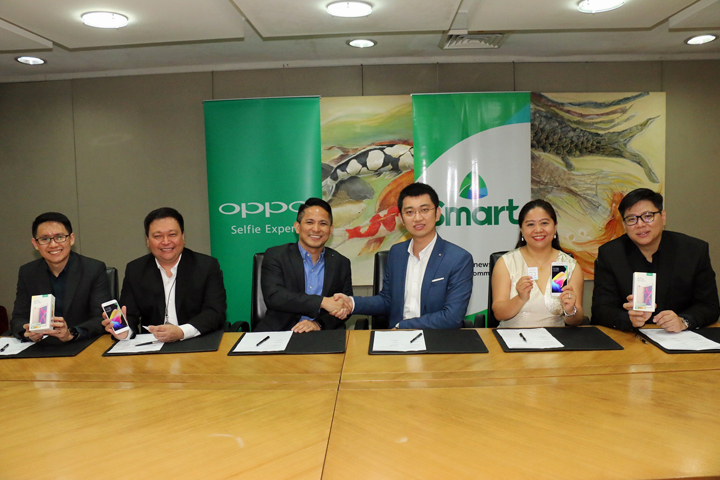 Smart partners with OPPO to drive LTE adoption in the Philippines

Under the partnership, Smart and OPPO are offering the OPPO A71 phone kit bundle to Smart, TNT and Sun users at a discounted price to encourage more customers to upgrade their devices to LTE.

LTE allows customers to experience overall faster download and upload speeds that they can use to stream video, play mobile games, send files on-the-go and share photos on social media.

“Our vision is to enable Filipinos to enjoy the fastest data connection with Smart LTE. We want to do this by equipping every Filipino with an LTE smartphone. Hence, Smart joins forces with OPPO to bring an LTE smartphone that allows our subscribers to level up to LTE and do this in an affordable way,” Santos said.

OPPO A71, one of OPPO’s best-selling smartphones, is available for P5,988, discounted from its original price of P6,990 while supplies last. The OPPO A71 phone kit bundle comes with an LTE upgrade SIM for existing Smart, TNT and Sun customers. First-time LTE SIM upgraders also get a free 1GB open-access data valid for 3 days upon successful upgrade, which customers can use for accessing social media sites like Facebook, Instagram, and Youtube, chat apps like Viber, and games like Mobile Legends, for example.

“OPPO and Smart share a mission, and that is to empower the customer with the latest technology and innovative products,” said Wan. “We’re partnering with Smart to bring LTE-ready and up-to-date smartphones at affordable prices to more customers.”

As a result, the average revenue per user (ARPU) among prepaid subscribers increased just three months after the SIM upgrades. As more subscribers upgrade to LTE, mobile traffic on Smart’s network also grew by 79% in the first half of the year, higher than the industry year-on-year growth of 54% for the same period.

Under Smart’s Level Up to LTE campaign, customers are encouraged to upgrade to an LTE-capable smartphone and an LTE SIM to be able to fully enjoy Smart’s upgraded networks.

“To enjoy LTE, our subscribers need only to remember three things: SPD – short for SIM, Place, and Device,” Santos said, adding that subscribers who are still using non-LTE SIMs can easily get an LTE Upgrade SIM at Smart Stores, Sun Shops, and sari-sari stores across the Philippines.

All Smart, TNT and Sun subscribers can check if their SIMs are LTE-ready by texting SIMCHECK to 5832 for free. They can also check if their location is LTE ready by accessing smart.com.ph/LTE.

“To fully experience Smart LTE, customers must have an LTE-capable device like the OPPO A71, which is an LTE smartphone with excellent specs. Our subscribers can now avail of this affordable smartphone at OPPO Stores, Rulls, PC Express, Comworks, and other device chains,” Santos said.

OPPO A71 comes with a 5.2” LCD display, a 13-megapixel rear camera and a 5-megapixel front camera, and is available in Champagne Gold and Blue.

Alongside device partnerships, Smart is also continuously upgrading its network. As of end-June, Smart has installed over 3,900 new LTE base stations across the country, not only to expand LTE coverage but also to lay the ground for LTE-A, which can provide even greater capacity and speeds to users with capable smartphones. This puts the total count of LTE base stations at over 12,600.

Underpinning PLDT and Smart’s fixed and mobile network roll-out is the expansion of PLDT’s fiber optic transmission and distribution network. At 204,000 kilometers, PLDT’s fiber footprint, the most extensive in the country, also supports Smart’s mobile network by providing high-capacity fiber connections for LTE base stations.

As a result of integrated network transformation efforts, PLDT and Smart were also recently cited for being the country’s fastest fixed and mobile networks for Q1-Q2 2018, respectively, by Ookla®, the global leader in internet testing and analysis.

Ookla said Smart achieved a Speed ScoreTM of 14.98, with average download speeds of 17.25 Mbps and average upload speeds of 7.65 Mbps, based on 2,118,464 user-initiated tests taken with Speedtest® on LTE-capable devices in the Philippines for Q1-Q2.

Smart is on track to fulfilling its commitment to the National Telecommunications Commission to cover 90% of the country’s cities and municipalities with mobile data service by the end of this year.

PLDT has committed historic levels of resources to support network transformation which is estimated to amount to US$ 5 billion from 2016 to 2020, with capital expenditures expected to reach P58 billion this year.