SKY Cable Corporation, the cable and broadband unit of ABS-CBN, nabbed the Gawad Jose Carpio: Excellence in Reputation and Brand Building Management, one of the highest honors at the 52nd Anvil Awards for its 25th anniversary campaign titled, “The Silver Sky: Paving the Road to Stronger Bonds and More Meaningful Connections with the Filipino Family.”

It was cited “for being the pioneer in the Philippine cable industry, continually building stronger relationships with the important people involved in its brand, the consumers, employees, channel partners, and stakeholders.” 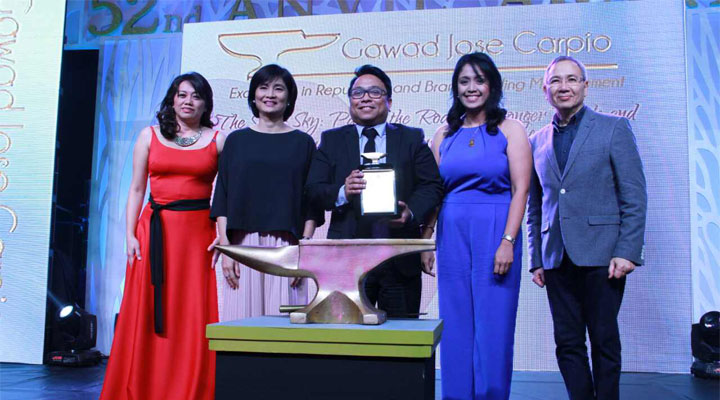 The 25th anniversary revolved around the “Me & My SKY” campaign handle that included a TVC, corporate thematic print ad, digital ‘picture perfect’ promo, a free channels activation to subscribers, a coffee table book, an employee event, and the first-ever experiential family cable fair in the country, SKY Alive.

Also part of the anniversary were SKYdirect’s efforts to distribute kits to AFP troops deployed in far-flung locations in the Philippines as well as to Knowledge Channel partner schools located in remote Zambales and Bataan towns as its way of giving access to information and enriching content.

SKY Alive now happens in select malls around the country that aims to let families experience the world of their favorite cable TV shows and meet the TV personalities and characters they love. The event highlights the connections that SKY’s content was able to build with Filipino families through the years, which is the main thrust of its 25th anniversary campaign.

SKY Cable is the first to introduce cable television to Filipinos in 1990. Since then, it has been a frontrunner in technology and cable TV content by being the first to design a highly customized viewing experience among subscribers, and offering the most number of HD channels.

Last year, SKY also donated SKYdirect kits to AFP troops deployed in far-flung locations in the Philippines as well as to Knowledge Channel partner schools located in remote Zambales and Bataan towns as its way of giving access to information and enriching content.

The special award named after the founding father of Philippine PR is given to public relations programs that demonstrated excellent leadership/management skills, innovation, and creativity in attaining communication objectives.

The Anvil Awards is organized annually by the Public Relations Society of the Philippines (PRSP) and is considered as the “Oscars” of the local PR industry with the ANVIL as an emblem of excellence in the field of public relations. A multi-sectoral jury carefully screened and selected the winners in each category.

Enjoy 72 Hours of Free Shipping and Up to 80% Discounts on Premium Items like Denon Turntable, Nintendo Switch, Sharp TV and many more on Shopee’s Payday Sale!