Available on both iOS and Android devices with new features, smoother functionality, improved interface and 11 languages.

AirAsia’s mobile app is nominated as the ‘World’s Leading Low-Cost Airline App’ at the upcoming World Travel Awards. This enhanced version is now available in 11 languages and it can be downloaded from the respective app stores of both iOS and Android devices.

Siegtraund Teh, Group Chief Commercial Officer of AirAsia said, “We are constantly investing in technology and innovation to make flying easier and more enjoyable for our guests. Our all-new mobile app offers our guests everything they need right at their fingertips. There has been over 9 million downloads of the AirAsia mobile app on both iOS and Android platforms, and we hope that more people will discover the convenience of our new and improved mobile app.” 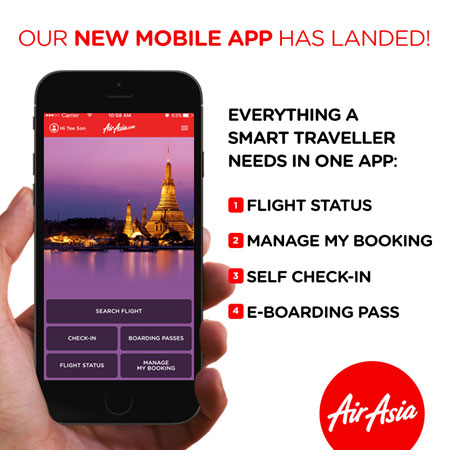 Among the new features of the AirAsia mobile app are the ‘Add to Calendar’ feature, which automatically links upcoming flights to the calendar; faster and simpler flight booking process, as well as improved mobile check-in and Manage My Booking experience where guests can include various add-ons to their flight bookings easily.

AirAsia first introduced the mobile app back in 2010 and was among the first airline in the region to develop its own app. AirAsia has always been at the forefront of many other successfully implemented technological advances in the region such as internet booking, self-check-in via web, kiosks and mobile, self-tagging service as well as self-bag drop.

For more updates on AirAsia’s latest news, as well as promotions, activities and contests, connect with them via Twitter (twitter.com/AirAsia) or Facebook (facebook.com/AirAsia).

From Digital Friend to Frenemy: 29% Takes a Device into the Bathroom, Despite the Risk of Being Hacked and Spied On

Eastern Communications introduces how to create an Intelligent Office

Brother Philippines team up with WWF for a brighter, more sustainable future