microSD format instrumental in expanding market for smartphones, extreme photography and other devices

SanDisk Corporation (NASDAQ: SNDK), a global leader in flash storage solutions, today announced it has shipped more than two billion microSD™ cards since it started commercial shipment of the technology ten years ago. The company commemorates this milestone on the eve of Mobile World Congress Shanghai.

Invented by SanDisk in 2004, the microSD format was initially known as TransFlash™. In 2005 SanDisk contributed the technology to the SD Card Association who renamed and released the final specifications for the microSD format on July 13, 2005. This format has become the most popular removable memory card in SanDisk’s history. Collectively, SanDisk’s two billion microSD cards could store an estimated 11,103 billion megabytes (MB)* worth of memory – the equivalent of more than 100MB of flash storage for every man, woman and child that ever lived on Earth.

The microSD card —which reduced the size of removable memory cards by approximately 75 percent —has played a pivotal role in a wide variety of consumer markets. For example, the vast majority of “point of view” or action cameras — the fastest-growing segment in digital imaging — are based around the microSD format.

The microSD format has also helped propel the smartphone market by giving both manufacturers and consumers greater flexibility and freedom. Approximately 75 percent of smartphone models on the market today contain microSD slots, according to data from Strategy Analytics1. Google included microSD slots in two of its fastest growing and largest mobile product segments — Android One, its mobile operating system for sub-$200 phones, and phones designed for emerging markets. Android M, Google’s next mobile operating system, and Windows Mobile both permit consumers to run applications directly on microSD cards and/or increase the primary storage capacity of their devices. 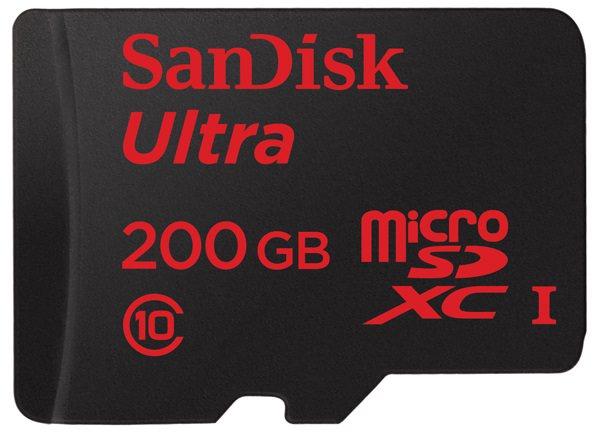 “Demand for storage never stops growing. We will soon see smartphones with multiple-aperture lenses, phones capable of shooting UltraHD video and applications for taking and viewing virtual reality environments,” said Shuki Nir, senior vice president, corporate marketing and general manager, Retail, SanDisk. “microSD memory cards will also be instrumental in the growth of the Internet of Things by lowering the barrier to experimentation. Two billion is just the beginning, and we look forward to contributing to future technologies enabled by the microSD format.”

A decade of SanDisk microSD technology:

With more than 5,000 patents, SanDisk positively impacts many markets through its flash memory innovations. In recognition of its achievements, SanDisk was named a Thompson Reuters 2014 Top 100 Global Innovator, an honor the company has received for four consecutive years.

SanDisk Corporation (NASDAQ: SNDK), a Fortune 500 and S&P 500 company, is a global leader in flash storage solutions. For more than 26 years, SanDisk has expanded the possibilities of storage, providing trusted and innovative products that have transformed the electronics industry. Today, SanDisk’s quality, state-of-the-art solutions are at the heart of many of the world’s data centers, and embedded in advanced smartphones, tablets and PCs. SanDisk’s consumer products are available at hundreds of thousands of retail stores worldwide. For more information, visit www.sandisk.com.