SOC Staff, 7 years ago 6 min read 947
MANILA, Philippines – The name of the game in the smartphone industry is innovation. If a smartphone or a phablet fails innovate to differentiate itself from the countless others available in the market, it fades into obscurity. But how many innovative features does it take to stand out in the industry? Last August, global innovation leader Samsung Electronics introduced its latest flagship phablet, the Samsung Galaxy Note5 to the world. All eyes were focused on this powerful device and its highly improved S-Pen. The whole world was unanimous in asking if the Galaxy Note5 has the chops to break the market. 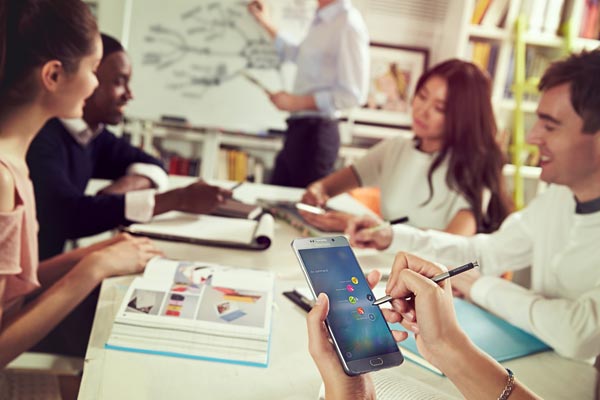 Samsung has always maintained a strong foothold on top of the smartphone industry. Now, the company has yet again released a powerful flagship phablet poised to win productivity-seeking consumers – the Samsung Galaxy Note5. How is it different from – and ultimately better than – everything else trying to go big?

First of all, Samsung’s design philosophy is unmatched by any other smartphone. The Galaxy Note5 is elegantly designed with a premium metal and glass finish, ensuring the perfect combination of style and sturdiness. It is also protected on both sides by Corning Gorilla Glass 4® so you can forget about scratches. The Galaxy Note5 will not be a victim of gravity. Its back is ergonomically curved which allows the phablet to sit comfortably on one hand without slipping. It comes in two luxurious colors: Black Sapphire and Gold Platinum. 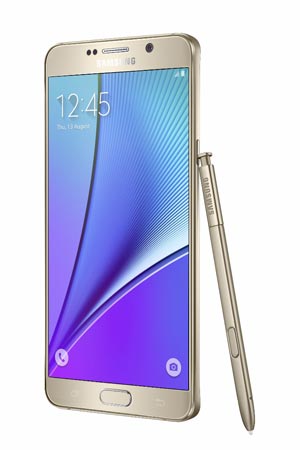 On the display side, the Samsung Galaxy Note5 sports a 5.7″ Quad HD Super AMOLED Display, arguably the brightest and sharpest display found in large screen smartphones today. When not in productivity mode, the phablet provides its user a superior viewing experience with true-to-life colors that rival even the quality of HD television sets. It also comes with a UHQ Upscaler which converts standard audio mp3 files to ultra-high quality audio. A dedicated audio clock decreases noise and sound distortion.

Arguably, what tech-savvy consumers always ask smartphone stores when they are hunting for new models is how fast the processor is. This is one of the aspects that the Samsung Galaxy Note5 excels at. The phablet leads the entire industry with a powerful 64-bit Exynos octa-core processor with 14nm technology, and 4GB worth of RAM. With all this engine power, the highly multi-tasking individual will find that the Galaxy Note5 is up to the challenge. Where other smartphones may fail in performance, the Galaxy Note5 rises above and leaves them trailing in the dust.

Another one of the Samsung Galaxy Note5’s stellar aces up its sleeve is its 16-megapixel rear and 5-megapixel front-facing camera. This camera combination comes with f1.9 lens and optical image stabilization (OIS) which gives picture-perfect shots even with poor lighting, shaky hands or moving subjects. Both front and rear cameras are also capable of taking photos in real-time High Dynamic Range (HDR). On the other side, the front-facing camera takes better selfies with correction tools and filters which can enhance skin tone, face, and eye shape. Even with the arrival of camera-centric competitors in the industry, the Galaxy Note5 proves that it’s not just about the number of megapixels. Its camera is engineered to provide the best combination between resolution and image quality.

Transcending better with the S-Pen

Brilliant display, faster processor, stellar camera. These phrases are how consumers usually describe a better smartphone. But Samsung doesn’t settle for just “better.” They want to be the best. The Galaxy Note5 isn’t just a better phablet. It comes with the all-powerful S-Pen which pushes the limits of what a phablet can do. The S-Pen, exclusive in the phablet industry to the Galaxy Note5, is unmatched when it comes to productivity. Coupled with the Galaxy Note5’s pressure-sensitive screen, the S-Pen’s pinpoint accuracy enables users to do what they want, when they want. The pen itself writes and feels like an actual pen, rather than just a stylus. It uses a click-to-access system to pull out the pen from its secure slot at the bottom of the phone. 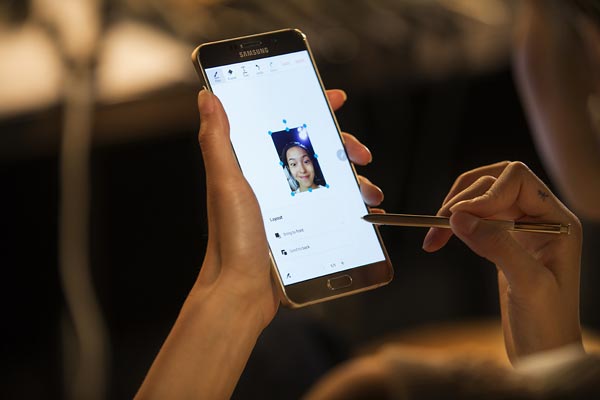 The S-Pen transcends normal stylus pens because of its perfect harmony with the Galaxy Note5’s hardware & software – without the need for charging. Moreover, it is not just a digital writing implement. It opens up a powerful productivity suite unique to Galaxy Note. Upon releasing the S-Pen, the Galaxy Note5’s new Off-Screen Memo opens a notepad that allows users the ability to write notes on the fly – even when the screen is off. If the screen is turned on, the S-Pen activates an improved Air Command which provides users the access to a plethora of productivity options linking writing to actions: Action Memo, Smart Select, Screen Write, S Note, and customizable shortcuts.

Action Memo opens a special notepad capable of recognizing text and turning it into concrete actions such as automatically inputting handwritten phone numbers into the Galaxy Note5’s Contacts. Smart Select captures content on the screen with the S-Pen’s pinpoint selection tools. Screen Write allows users to write on screen shots. S Note opens up the iconic Samsung note-taking app. Users may also assign customizable shortcuts of their most used apps through the new Air Command.

Having a full suite of productivity features anchored on the all-powerful S-Pen would be put to waste if your battery life could not keep up with your needs. That will never be a problem with your Galaxy Note5 as it is powered by a 3,000mAh battery. When the situation actually necessitates a battery re-charge, work won’t have to be postponed for so long as charging is now a breeze with Adaptive Fast Charging (wired), and built-in Fast Wireless Charging capability on the Galaxy Note5. You can get up to 4 hours of battery life in just a 10-minute charge. You can also get a 100% charge in 90 minutes using the Adaptive Fast Charger (up to 2.5x faster than other brands), or 100% charge in 120 minutes using the Fast Wireless Charger (~33% faster than the previous model). If you’re out without your charger, you can always rely on Samsung’s Ultra Power Saving Mode to extend your battery to its limits, and still be able to receive and take calls, SMS, access the internet, and select apps.

So now here’s a notable proposition for you: why not upgrade to the Samsung Galaxy Note5 today?

Samsung Electronics Co., Ltd. inspires the world and shapes the future with transformative ideas and technologies, redefining the worlds of TVs, smartphones, wearable devices, tablets, cameras, digital appliances, printers, medical equipment, network systems, and semiconductor and LED solutions. We are also leading in the Internet of Things space through, among others, our Smart Home and Digital Health initiatives. We employ 319,000 people across 84 countries with annual sales of US 196 billion. To discover more, please visit our official website at www.samsung.com and our official blog at global.samsungtomorrow.com.