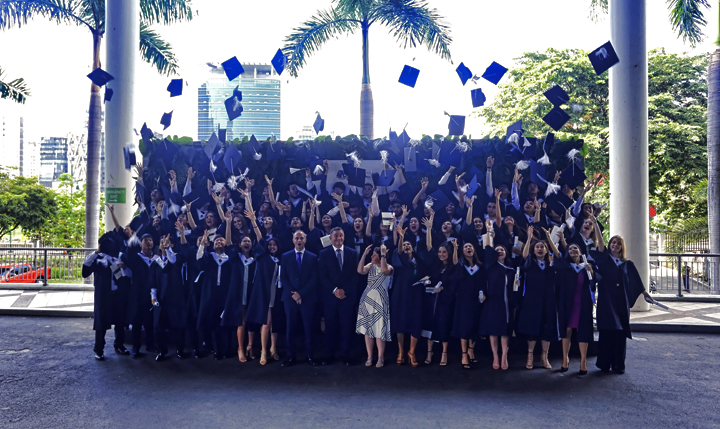 At the start of July 2017 The British School Manila student, Liezl Bitas, proudly received her International Baccalaureate Diploma score of 45 points, the top mark that can be received by a Diploma student and the culmination of two years’ hard work and study. Of the 159,400 students who completed the International Baccalaureate Diploma programme across the world in 2017, Liezl was one of only 218 to receive a perfect score of 45 points, a fantastic achievement.

Liezl, a proud Filipino, joined the British School Manila in August 2015, with her intellect, passion and energy, along with high levels of humility and self-reflection she was perfectly balanced and certainly ready for the rigors of the IB Diploma. As she embarked on the two year IB programme, she immediately earned the respect of teachers and students, with her passion for learning and her ability across all subjects, particularly shining when finding opportunities to merge her academic abilities with her love of film.

Liezl is a storyteller, a student with a unique gift of words and the ability to create spellbinding narratives and engaging film work. It was no surprise that Liezl chose to apply to study Film at University; her work and ideas deserve to be seen by a wider audience and she is determined to both learn her craft and develop her own voice and we look forward to watching her evolve over the coming years. ‘Best Director’ sometime in the future?

Despite receiving an impressive array of offers from US Universities, Liezl has chosen to continue her studies at the College of Saint Benilde in the Philippines. She has a passion for giving her own country and culture a voice, although she one day dreams of being able to study overseas where she can gain a greater perspective of her own place within the wider world, an experience she believes will enhance her ability as a Pinoy storyteller.

Liezl Bitas is a name to be watched, a Philippine talent to be nurtured and developed.

­­The British School Manila (BSM) is a highly regarded co-educational British international school established in 1976. The School is proud to uphold the high standard of the British education system and we take full advantage of our multi-cultural setting. They are accredited by the Council of International Schools (CIS) and also a member of The Federation of British International Schools in Southeast Asia and East Asia (FOBISSEA) and The Independent Association of Prep School (IAPS).

Cooking delicious and nutritious meals with the SAMSUNG Smart Oven