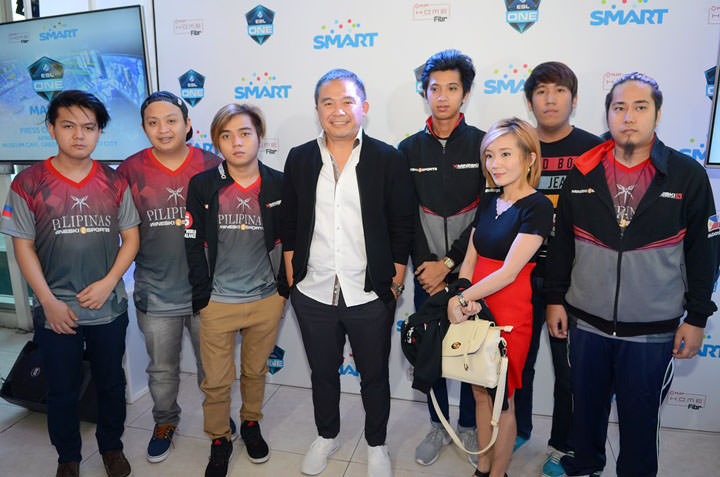 Team Mineski.Sports5 will represent the Philippines at the ESL One Manila 2016, Southeast Asia’s first premier DOTA 2 tournament happening at the SM MOA Arena on April 23 to 24. The announcement was made by PLDT Home Fibr and Smart Communications last April 7 at the M Café, Ayala Museum, Makati City. ESL One Manila 2016 will gather some of the world’s best online gamers all vying for the prize pool worth USD250,000.

ESL One Manila, the largest Esports event in PH to date, is spearheaded by Germany-based Turtle Entertainment, the world’s biggest Esports company. The tournament is presented by PLDT Home Fibr and Smart.

Team Mineski.Sports5 is composed of Ryan Jay Qui, Benguet Lawis, Jun Kanehara, Jessie Vash Cusco, and Julius Caesar Sto. Domingo. The team will battle it out with seven teams from Asia, Europe, and the US. Team Mineski.Sports5 already won the multi-level nationwide qualifiers that gathered teams from Cagayan de Oro, Cebu, and Manila.

“We are very thrilled to help bring a world class gaming event in our country and put us on the map of the booming international Esports scene. This is a milestone in PLDT Home Fibr and Smart’s pioneering efforts in ‘changing the game’ for Filipino gamers,” said Arnel P. Fermin, EVP and head of Consumer Business at PLDT and Smart. “ESL One Manila also builds on our thrust to elevate online gaming to a form of a sport, where the values of team work and discipline, coupled with strategy and mental agility, are showcased,” he said.

ESL One Manila 2016, happening at SM MOA Arena on April 23 to 24, will be exclusively broadcast by TV5. PLDT Home Fibr and Smart subscribers can enjoy exclusive perks including a chance to score tickets to the event, win Steam vouchers, meet and greet their favorite Esports teams, and take home prizes from raffle and games.

Powerful and pioneering products for gamers

A multi-player online battle arena game, DOTA 2 matches are played between two five-player teams whose goal is to destroy the stronghold of the opposite team while defending their own. With its gripping graphics and gameplay that requires great strategy and coordination among teams, DOTA 2 has become a hit game among millions of professional and casual players around the world.

PLDT allows Filipinos to take their game play to the next level with PLDT Home Fibr, the country’s most powerful broadband service with the unique feature of symmetrical download and upload speeds – perfect for exhilarating and action-packed online multiplayer games like DOTA 2.

For greater convenience, PLDT Home has also made it easier for subscribers to charge their Steam wallet purchases to their bill.

On the other hand, Smart has introduced unparalleled convenience to Filipino gamers through Gamex, a pioneering platform that allows users to buy credits for popular PC and mobile games using prepaid load or postpaid account by visiting gamex.ph/epins, the country’s leading gaming portal.

Those into mobile games can also rely on Big Bytes 50 – Smart’s biggest mobile data offer yet – which now offers ‘double data’ with 700 MB for gaming and surfing, plus 600 MB for streaming on YouTube, YouTube Gaming and iflix – valid for 3 days, still at P50.

ESL One Manila 2016 adds to the growing list of world-class Esports events that PLDT and Smart mounted to support the passions of Filipino gamers and enthusiasts.

3 Tips in Buying your Dream Car