Over 380,000 Tweets were generated from the conclusion of the much anticipated re-match

In what is touted to be his last professional fight, the “People’s Champ” Manny Pacquiao left the boxing ring on a high note after bagging the Legacy Belt or the Special WBO commemorative title belt against American boxer Timothy Bradley.

As expected, thousands of Pinoys went to Twitter to share their excitement, thoughts, and celebration from third Pacquiao-Bradley face-off. In fact, The fight generated 380,000 Tweets between 9:00am and 12:45pm (Manila Time). 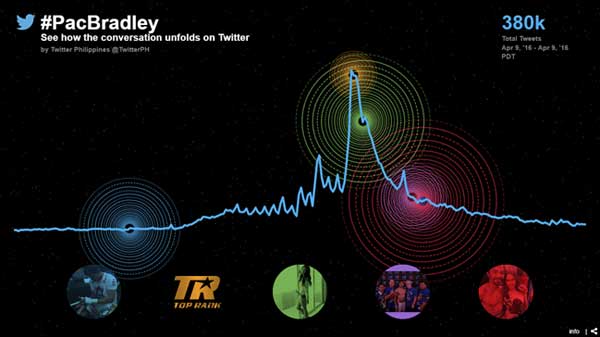 Twitter conversations was consistently active, fiery, and exciting — with it peaking at 12:27pm (Manila Time) with 9,400 Tweets per minute when Pacquiao was officially named the winner via a 116-110 unanimous decision, ultimately breaking the long-standing 1-1 tie between him and Bradley.

“Every Manny Pacquiao fight has become a national event in the Philippines and his every win or loss has been a shared experience for many Filipinos,” says Pratiksha Rao, Twitter’s Head of Media Partnerships in Southeast Asia. “We at Twitter are honored to provide a live, public communications platform, allowing each Filipino to connect with their countrymen in this time of triumph — especially now that Pacquiao is reportedly hanging his boxing gloves for good.”

On Twitter, Pinoys – including several celebrities and Twitter personalities – went to the social media platform to express their support over the People’s Champ. Some of them even injected their Tweets with humor about his candidacy for a seat in the Philippine senate.

Meanwhile, Twitter conversations about the bout was notable worldwide. In fact, the last American Idol winner Trent Harmon who performed the American national anthem during the fight also went to Twitter to share his excitement to his followers via Periscope

Twitter (NYSE: TWTR) enables everyone to create and share ideas and information instantly, without barriers. The service can be accessed at Twitter.com, on a wide variety of mobile devices and via text message. Available in more than 35 languages, Twitter has more than 320 million monthly active users. For more information, visit discover.twitter.com or follow @TwitterPH.

Through Lendr, you can win an all expense paid vacation for two to Siargao – Here’s how

Planning a big party on Mother’s Day? Pool your resources together with GCash Fund Transfer