OPPO Celebrates 16th Anniversary, Paving Its Way for the Next Decade

Meanwhile, former De La Salle University tennis player Alberto Villamor and Baguio’s top player Jet Tangalin gave their all in the men’s singles championship match. Villamor, who lost in the first set (2-6), bounced back and swept the second (6-3) and third sets (6-2) to beat Tangalin. Prior to Tangalin, Villamor took on Vince Salas in the semi-finals match of the PPTO Nueva Ecija leg that lasted for two hours and 40 minutes, the longest match recorded in the tournament’s run to date.

“The Nueva Ecija leg has been our most exciting leg yet, with the participation of some of our country’s top tennis players who displayed their skill and talent in the court,” Glen Dasig, Peugeot Philippines President, said. “We are eager to witness similar high intensity, exciting matches in the last two legs of the PPTO in Cebu and Manila in early 2016.”

Aside from cash prizes from Peugeot Philippines and giveaways from tournament sponsor, Wilson, champions of the PPTO Nueva Ecija leg will face the other winners of the four (4) other regional qualifying legs in the National Finals to be held in Manila in February 2016. 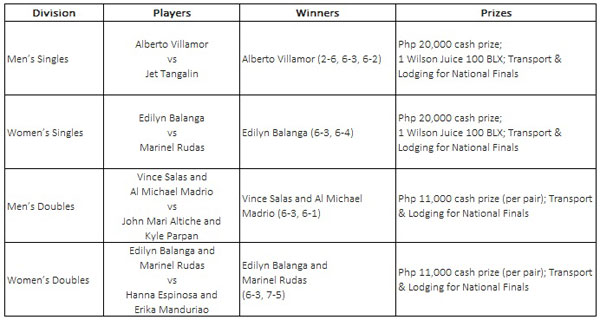 The next PPTO regional leg will be held in Cebu on January 9-15, 2016. Filipino tennis players aged 13 and above who are interested in joining the competition simply need to head to the nearest Peugeot dealership, regional representatives or visit the official PPTO 2015 website (http://www.peugeottennis.ph) to register online and download the necessary registration and waiver forms. A fee of Php 500 is required to be paid in full when the players check-in on Day 1 to complete their entry in the tournament.

The PPTO is brought to you in part by Smart and Total. For other PPTO information, updates and results, players may also visit the tournament’s official Facebook page: https://www.facebook.com/PeugeotPHTennisOpen.

20 Reasons to Love the ASUS ZenFone 3