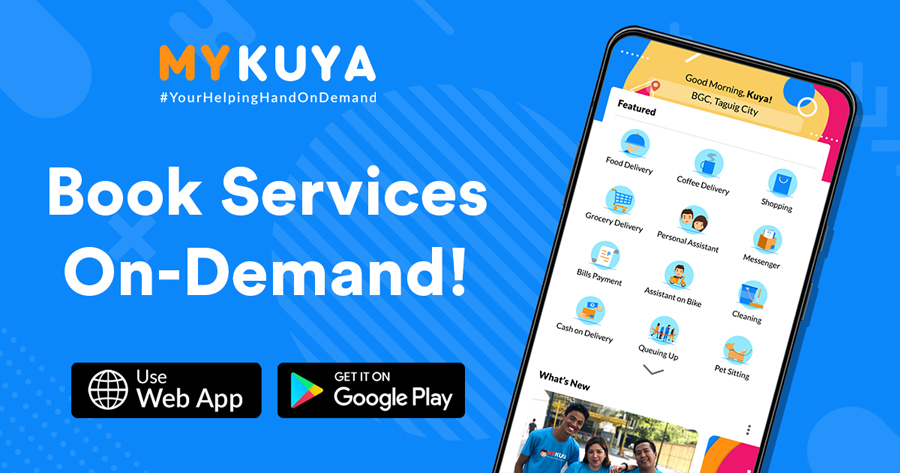 Nandito Na Si Kuya: MyKuya Looks to Future Opportunities in the Face of a Pandemic

Founded in 2017, the MyKuya app almost quite literally does it all: from motorcycle delivery, queuing in line at the payment center to your pay bills, washing your car and even down to doing your groceries. The company truly lives up to its promise of being a one-stop on-demand service app. With just a few clicks, a user will be able to see the available services in their area, input their request, and then be matched with a Kuya or Ate (as MyKuya’s talent is affectionately referred to) that will do the task.

It’s the utilitarian nature of the app that’s caused it to become increasingly in-demand during the COVID-19 pandemic.

Thus, the company is also proud to announce that despite the challenges they’ve faced in recent months, MyKuya will now be expanding beyond Metro Manila and into provinces such as Cavite, Pangasinan, Quezon, and Zambales. The app will be available first mostly in their bigger cities, concentrating in places that are likeliest to see the highest demand.

Services that will be available will vary across the board, but provincial users can expect to have access to many of the app’s most popular services. Cities such as Lucena and Olongapo, for example, can have their groceries delivered and even hire a personal assistant on a motorbike. In Cavite City, Dasmariñas, and General Trias, users can even quickly hire handymen like electricians, plumbers, and carpenters for in-house repairs.

The MyKuya team hopes that this expansion can set the stage for eventual expansion into both Visayas and Mindanao, where the company believes the potential to generate opportunities is great. Their expansion is also part of its new franchise program, where the company aims to support businesses by giving them a platform to augment and maximize the efficiency for their employees. The BizHelper feature, for instance, is an easy way to hire someone to assist in small tasks for a business.

Of course, MyKuya fought hard to be able to expand. According to MyKuya country head Dennis Bunye, the first few days of Enhanced Community Quarantine (ECQ) back in late March saw an unprecedented increase in demand. “Nabigla talaga kami sa pagdami ng users,” Bunye recalls, “It was unlike anything we’d seen before. We had to work on the weekends just to keep up and some of us nakitulog pa sa office!”

Yet despite the challenges brought on by the pandemic, Bunye emphasizes that MyKuya was all too happy to provide whatever help they could. It’s thanks to the app, for example, that many who were stuck indoors were able to safely order essentials like groceries and medicine without any hassle.

The app’s existence has also benefited many of those who were left unemployed by the pandemic. Bunye notes that an online job fair hosted by MyKuya saw as many as 1,000 job seekers in just 45 minutes. MyKuya was even able to onboard over 7,000 new Kuyas and Ates during the ECQ period alone, many of whom were contractual workers that came from hard-hit industries like restaurants and tourism. For many of these workers, MyKuya represented a way for them to continue putting food on their family’s table while providing a valuable service to their community. Kuyas and Ates are also regularly given masks and hand sanitizers while undergoing routine temperature checks, ensuring they can be safe and healthy on the job.

“Here at MyKuya, we’ve always believed in providing meaningful employment,” Bunye explains. He refers to their mission of creating 1 million job opportunities in the Philippines by the year 2022, a goal that they proudly declare on their company website. “Yun yung reason why the company was started. We believe kahit sino can take part in solving a societal ill like underemployment and MyKuya is just our way of doing that.”

He adds that although the pandemic demanded more than ever out of his team, he hopes that their expansion can serve as inspiration that opportunity can be found in any situation.

“We’re proud to say that we were able turn things around from a position of confusion into a place where we could finally give back,” Bunye concludes. “So if we can rise up and make the best out of a bad situation, gusto din namin ipakita sa mga Pilipino na kayang-kaya din nila.”

PayMaya and Beep Team up to Provide Safer, Contactless Commute for All

OPPO to Debut Groundbreaking Innovations and Technologies in MWC 2019

Savor the flavor of matcha at home