Home > Tech > Many Users Still Use Only One Password for All Accounts, Kaspersky Lab Quiz Reveals

Many Users Still Use Only One Password for All Accounts, Kaspersky Lab Quiz Reveals

Testing of user cyber savviness carried out by Kaspersky Lab has demonstrated that many people are still not sufficiently careful about their passwords.

The internet security company carried out testing in the form of an online survey to check how cyber savvy over 18,000 Internet users are.

Respondents were all over 18 years old from 16 countries around the world, including 1,394 internet users from the Philippines. 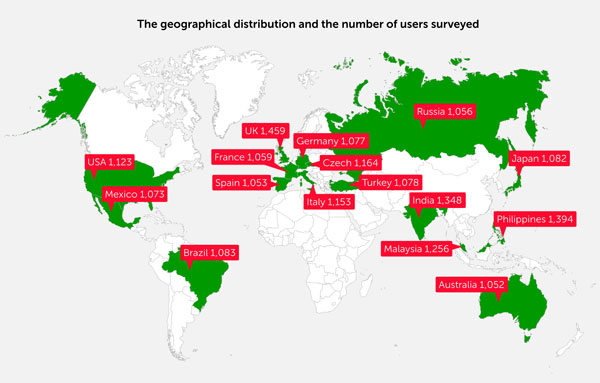 Survey results showed only 38% create strong new passwords for each account, while one in seven (14%) has just one password for all accounts. These users risk having several accounts simultaneously compromised in the event of a data leak.

“Unfortunately, many people don’t have a very good understanding of the scale of Internet threats and are not serious enough about protecting their personal data online, significantly increasing the risk of losing it,” explains David Emm, Principal Security Researcher at Kaspersky Lab.

The level of risk is not much lower for those who use just a few passwords for a larger number of accounts (36%) and those who use variations of the same password pattern (12%).

What further complicates the situation is that, according to another Kaspersky Lab survey, one user in 10 comes up with passwords that are less than eight characters in length, while 12% do not try to make their passwords more difficult to guess by using, for instance, upper-case letters, numbers mixed with letters, punctuation signs or other similar tricks.

To make matters worse, the study also revealed that consumers are putting the safety at risk by storing their passwords in easy to access or unsecure places.

Over half (57%) of respondents admitted they kept their passwords on a piece of paper, on their phones, in text files on their computers, or saved them in the browser.

And when the browser offers to save a login and password, a third (36%) are ready to agree, thus playing into the hands of cybercriminals or dishonest people who may get hold of their device.

This careless attitude towards passwords can be explained by many users being convinced they have no confidential information stored on their computers.

This is what 27% of respondents believe, without realizing that passwords and logins are in themselves a favorite target of cybercriminals.

In addition, one more Kaspersky Lab’s recent study showed that 73% of users would rather reveal their passwords than go without underwear. As a result, an alarming 25% of those users surveyed have had their accounts hijacked in the last year.

“A strong password that differs for each account is an important basic element of protecting your digital identity. You can think of and apply a single algorithm to create passwords which are not easily cracked but which you can easily remember. There are also special programs that make creating and storing passwords easier,” Emm said.

The same survey also showed a great majority of Filipino internet users are vulnerable to phishing attacks online as only 11% or 1 out of 10 netizens can identify a safe web page.

Kaspersky Lab tested the ability of respondents to distinguish a fake page against a genuine page by letting them choose one of four offered web pages on which they would freely enter their personal information. 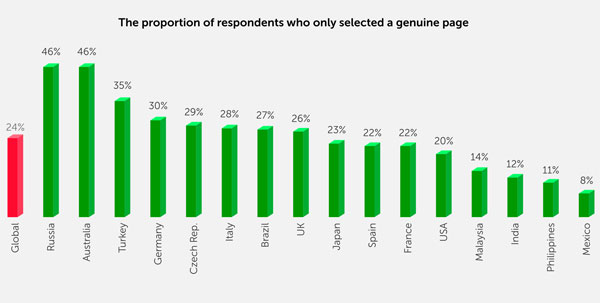 Three out of four pages were screenshots of phishing pages detected by Kaspersky Lab experts on the Internet. Special samples were selected for each country.

For the Philippines, Kaspersky Lab used Facebook, the leading social media platform in the country.

“These results suggests that majority of the Internet users are careless and trust easily, including those from the Philippines. Phishing attacks play on people’s trust, so to avoid them, users should have their red flags on all the time. Opt to navigate through websites by manually inputting the address instead of clicking links that are not always safe.” said Jimmy Fong, Kaspersky Lab Southeast Asia’s Channel Sales Director.

“The Philippines is known as one of the countries with the largest number of Facebook users. This makes any user in the Philippines a target, because this country is actually a holy grail for cybercriminals who think ‘the more victims the better’. Filipinos should really be more careful, one wrong click can cost them their identity, their privacy, and even their money,” warns Fong.

Are you good at protecting yourself online? Take the test at https://blog.kaspersky.com/cyber-savvy-quiz/.

Learn how to secure your data at https://blog.kaspersky.com/tag/cybersavvy.

Kaspersky Lab is one of the world’s fastest-growing cybersecurity companies and the largest that is privately owned. The company is ranked among the world’s top four vendors of security solutions for endpoint users (IDC, 2014). Since 1997 Kaspersky Lab has been an innovator in cybersecurity and provides effective digital security solutions and threat intelligence for large enterprises, SMBs and consumers. Kaspersky Lab is an international company, operating in almost 200 countries and territories across the globe, providing protection for over 400 million users worldwide.

Here’s how PayMaya users can earn raffle tickets in the PayMayaguinaldo promo!