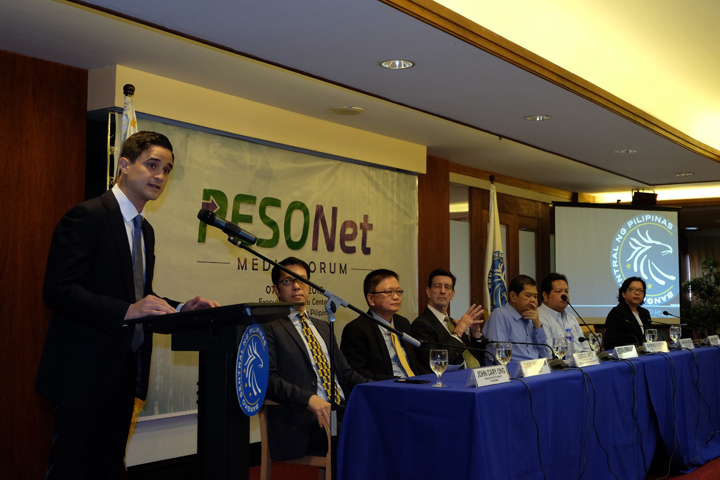 Lazada Philippines, the largest online shopping and selling destination in the Philippines and in Southeast Asia, expressed optimism on its use of PESONet, an interbank Electronic Funds Transfer service.

Jonathan Bates, Vice President for Finance of Lazada Philippines, said they have been using PESONet since January of this year, particularly for thousands of payment transfers to its merchants and its various partners. He said they started following developments on the National Retail Payment System (NRPS), the launch of PESONet in November last year and InstaPay this year. PESONet and InstaPay are two of the digital payment services developed under the Bangko Sentral ng Pilipinas (BSP)’s National Retail Payment System (NRPS) framework.

“When PESONet was launched, we immediately contacted our banks, even my personal bank, just to understand this initiative. We made it clear that it is something we want to adopt and help propagate, given our volume of transactions, which is really huge, so we can be a pilot user,” Bates said.

Bates revealed they started to use PESONet in phases, first with the compliant banks through small amounts, which gradually became bigger as they went along. “We even conducted huge volumes of transactions/transfers in small amounts just to see PESONet’s capability in handling multiple transactions, and if the respective banks can receive it in the same day.”

He said during its early days, they discovered what PESONet can and cannot do, which Bates said sometimes depends on the bank or the branch within the bank. The good thing about it, he said, is that they were able to speak directly to the compliant banks and told them what went wrong and see what can be done in the next transfer. “We’ve been really working with the banks since December after PESONet was launched. We gave them feedback on where there can be improvements in the receiving side, particularly on the same-day promise.”

He revealed that after starting with PESONet early this year, their volume of transactions became bigger, which made him even bullish about PESONet’s overall potential for providing convenience to customers and merchants. Bates likewise stressed that they can still grow bigger in number of transactions but certain issues have to be cleared first to help exponentiate their volume, such as with the Bureau of Internal Revenue (BIR) on the provision of original receipts, sales invoice, and Form 2307. “Because these still need to be in physical form, a lot of businesses still refuse to receive PESONet payments.”

But despite these concerns, Bates said that Lazada’s merchants love PESONet because the idea of still using a cheque, previous bank funds transfer services, fees charged to beneficiaries, are now a thing of the past; and everything can now be done on the same day. “These benefits are undeniable. Hopefully, we can increase the same-day cycle. Now there’s a cut-off time, submit payment and by end of day or up to midnight, the payment has to be at the bank. We’d like to see PESONet get closer to real time, and that it will only increase the adoption.”

He even added that PESONet can be 24/7 but quickly downplayed this, saying it is not yet realizable because of the manual processes still involved. However, with standardization, centralization, cooperation among financial institutions, and automation, it can be 24/7, or the payment cycle can be closer to real-time.

BSP Governor Nestor Espenilla, Jr. cited Lazada Philippines’ case and that of other e-commerce players in the country, saying e-commerce won’t reach its full potential due to the inconveniences in payments, majority still done via COD, over-the-counter in banks, or via payment centers. He said paying online is still difficult due to low PC penetration but everyone has a smartphone so this is key. “The smartphone becomes a portable bank. If the electronic payment system is organized behind this, then the smartphone becomes a powerful instrument and the 2020 goal of 20 percent of transactions done electronically becomes more realistic and doable because of the smartphone, which is largely available for more people.”

Espenilla said the country’s archipelagic landscape opened their eyes to digitalization of payments and the financial system in general for the benefit of both the banked and the unbanked. He said a survey the BSP commissioned with the Better Than Cash Alliance (BTCA) to determine the scope of digitalization of financial services in the country revealed that only 1 percent of total transactions by volume are done electronically, which already includes credit cards. Everything else are done via cash and check.

Realizing this, Espenilla said it was the reason why they thought of the NRPS. “The strategy was to gather the players and create an interoperable digital ecosystem, which eliminates the need to pay in cash or checks. Everything is done electronically from one account to another person’s account, which also applies to merchants or employers through payroll. That is happening now but still very limited.”

He said their vision is for digitalization of the financial system to happen economy-wide, which is also a challenge, plus the idea of competition among banks and other supervised non-banks. He said discussions continue so that players will understand the vision. BSP has led the creation of a governance framework where all industry stakeholders, regulated entities, banks and non-banks, are organized to come together and be part of the developmental process. He hopes that a financial highway can be created where payments and other money issues will speed up by removing the slow-clearing process, where the faster people get their money, the better.

The BSP governor also sets his sights on the future of electronic banking in the Philippines as his vision, a world where anyone can pay anyone, anywhere, anytime, 24/7, digitally from the sari-sari store, to people remitting to one another anywhere in the world to make everything convenient. “It’s not really a cash-less but a ‘cash-lite’ world, where each transaction is safe and secure, and the stakeholders, being regulated entities, have the responsibility to maintain information security.”

For more about PESONet and participating financial institutions, visit www.pesonet.info.

Shopee Fashion Week Gathers Leading Fashion Brands in the Philippines, Offers Up To 95% Off The Hottest Fashion Items