Home > archive > In support of Windows 10 launch, Microsoft will partner with 10 global nonprofits that are “upgrading the world”
archive

In support of Windows 10 launch, Microsoft will partner with 10 global nonprofits that are “upgrading the world”

In support of the Windows 10 launch, Microsoft will partner with 10 global nonprofits to tell the inspiring stories of how they are “upgrading the world” by addressing pressing issues such as poverty, HIV, education, humanitarian relief and the environment. Nine of these organizations have already been selected (details below) and the 10th will be crowdsourced among the public.

The initiative will highlight the great work of these organizations, and demonstrate how Microsoft empowers people and organizations to achieve more. It will be executed through an integrated approach involving strategically placed content, motivational stories, influencer outreach and ongoing consumer engagement to create excitement for the nonprofit partners and Windows 10.

To further empower their efforts, each global organization will receive from Microsoft a $500,000 cash investment plus a combination of technology and services, and promotion of its work through our owned, earned and paid media. Each of the 10 global organizations will receive a month-long spotlight pegged to either a tent pole moment, event or program that aligns with the larger messaging of “Upgrade Your World.”

The following organizations are the global nonprofit partners disclosed in the July 13 announcement:

On July 29th, people around the world can nominate a 10th global nonprofit. To vote, consumers need to tag (@) the name of their favorite global nonprofit with the hashtags #UpgradeYourWorld and #vote on the following social channels:   Twitter, Facebook, and Instagram. The organization with the most votes, and that meets eligibility criteria, will be selected as the 10th nonprofit. The winner will be announced on September 1. Go to windows.com/upgradeyourworld to find out how you can nominate your chosen NGO.

Microsoft is giving employees worldwide an extra day off to volunteer in their communities at any time within the next year. This August 20, Microsoft Philippines will be spending the day with Gawad Kalinga to upgrade their community! Together with partners, Microsoft employees will help build houses in a Gawad Kalinga village, and upgrade their classroom with Windows devices. 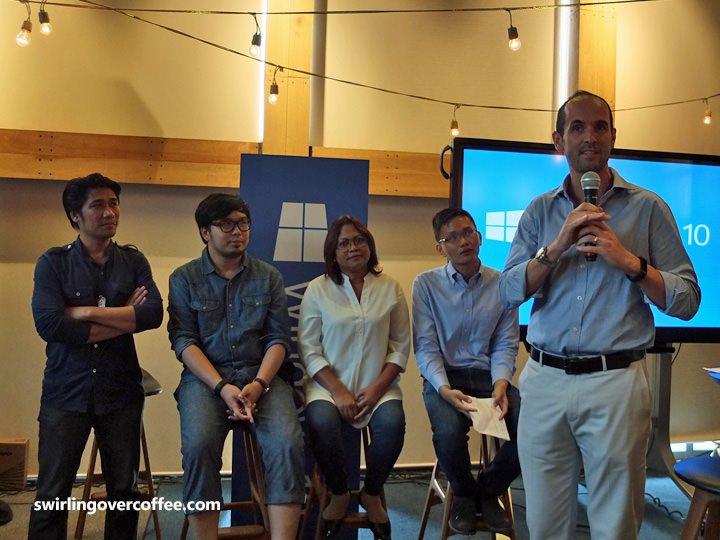 Here are the Microsoft Windows 10 Ambassadors who want to upgrade the world, each in his or her own unique way: (L-R)  Efren Penaflorida (CNN Hero of the Year) whose efforts pioneered the “pushcart classroom”; Dan Matutina, who led The Design Co. Mission, an event where graphic designers pitch solutions to pressing problems; Myrna Padilla, who heads Mynd Consulting, a software company that developed mobile application OFW Watch, which connects overseas foreign workers together to help prevent them from abuse. Far right is Cian O’Neill, Chief Operating Officer of Microsoft Philippines.

Microsoft Philippines is partnering with the following individuals to celebrate people and organizations who do great things and inspire others to upgrade the world:

Efren Peñaflorida also known as the “Kariton Kid” is a Filipino teacher and social worker who founded Dynamic Team Company, a youth group in his high school that aimed at diverting students attention away from street gangs, and towards community activism and personal development. Joined by other classmates, they named the group “Dynamic Teen Company”.

They eventually pioneered the idea of the “pushcart classroom”, wherein pushcarts were stocked with school materials such as books, pens, tables, and chairs, and then used on Saturdays to recreate school settings in unconventional locations such as the cemetery or trash dump.

In March 2009, Peñaflorida was featured as a CNN Hero as part of the news network’s program to honor individuals who make extraordinary contributions to help others. He was eventually named CNN Hero of the Year.

Myrna Padilla spent over two decades as a domestic worker abroad. In 2000, she founded the Mindanao Hong Kong Worker’s Federation (MINFED) to serve as an advocate for the OFW in Hong Kong. Myrna developed programs and processes, including computer literacy, specifically designed to confront issues associated with Materialism, Dependency and the Fatalism that often follows from the lost hopes created by the OFW’s economic situation and worsened by the separation from family and loved ones.

In 2006, Myrna returned to the Philippines, and using money she had saved from her long service pay, founded Mynd Tech Management Services. Padilla now heads Davao-based Mynd Consulting, a software company that eventually developed mobile application OFW Watch that connect overseas foreign workers together to help prevent them from abuse.

Dan Matutina is a graphic designer and illustrator whose work spans various media. To date, he has created designs for commercials, magazines, furniture, slippers, maps, and even food.

He is the founder of plus63, a design studio that creates graphic design for different brands and cause-oriented organizations. The company’s name is a shout out to the Philippines’ country code. He recently led The Design Co. Mission, an event where different graphic designers gathered to pitch solutions for pressing problems in the Philippines, particularly in health, education, and culture.

Dan is also part of the think tank behind Wander, a concise, fold-out map that invites locals and tourists to visit forgotten cultural hubs in Metro Manila and other cities.

Dominic is a winner of Microsoft YouthSpark through his propoal “Libro Ko,” a site which hopes to become an online resource and forum for students to discuss and better understand various Filipino literary works.

He is among the 5 who embarked on a volunteer trip to the Amazon to learn about social entrepreneurship, leadership, conservation, and rural development issues in the Amazon rainforest.

Windows 10 brings back Start button, makes tablet and desktop experience smoother, is available as a free upgrade in 190 countries