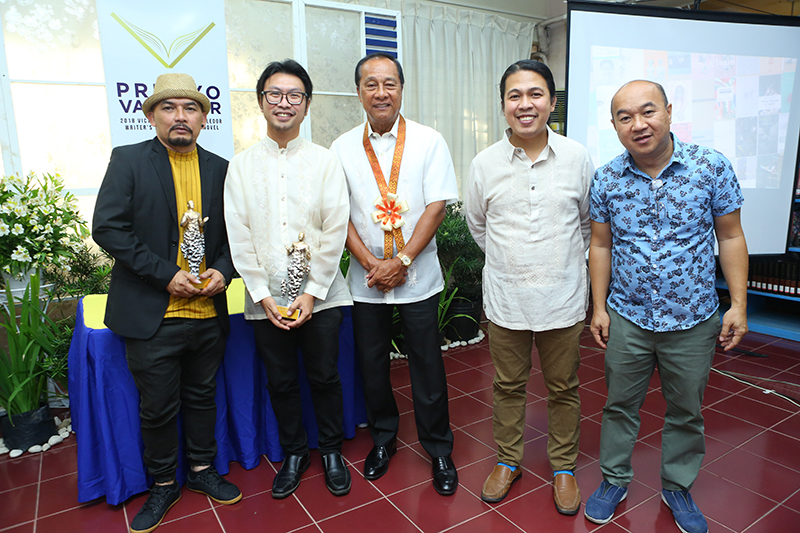 As the Philippines celebrates Buwan ng Wika this month, it’s but timely that the Commission on the Filipino language is dedicating this year’s theme to honoring the various indigenous languages of the county as an important part of nation building. In Bicol, for instance, its own languages are kept as spicy and alive as ever by its thriving literary community and by a recently concluded 1st Premyo Victorio C. Valledor for Bikol Novel.

Despite the diversity of its geography-based dialects, the Bicol writing community is alive and has been prolific with various works, translations, even books-thanks to the efforts of institutions like the Ateneo de Naga University Press, and havens like the Savage Mind bookshop ran by Kristian Sendon Cordero (who also happens to be the Deputy Director of Ateneo de Naga University Press).

The awarding ceremony of the 1st Premyo Valledor Award for Bicol Novel happened in April with two declared winners each receiving a trophy and the Php50,000 cash prize. Niles Jordan Breis won for “Kalatraban Sa Alkawaraan” and Jerome Hipolito for “Dyurnal Entries.” And by this time, production for the two novels are underway in time for Breis’s and Hipolito’s book launches and tours in the province.

Speaking on behalf of the Ateneo de Naga University Press, which organized the contest, Cordero noted the main concerns of setting up the maiden literary competition: “Getting the entries became our top challenge because this was something new; but we were up to the greater challenge of how to bring the idea across the community-the writers, teachers, and other members of the local literary scene. Understandably, it was tough selecting which novels would win that’s why we ended up declaring two winners. The good thing now is that people now recognize that contest like the Premyo Valledor Awards exists.”

Cordero, a prized literary contest winner himself, notes that the contest is a gamechanger. “We have this notion that the highest literary awards are always given to English and Filipino works. Some people even have reservations about using a regional language because they think using the vernacular, especially using so-called obscene words, could result in narratives that are too close for comfort. But when you write in a language you have to penetrate through its wall. You are allowed to speak your truth. I’m glad that the board of judges and organizers had an open mind about the works submitted by the novelists.”

He related that the current collection of Bicol literary works popular among Filipinos are still the classics of past generations, most of which consist of folk literature such as songs, epic poems, and legends; and added that these are stories handed down to the young generation by their parents, grandparents, and ancestors.

“We want to proceed with a sense of something new. Participating writers may create according to their own style and whatever Bicol language they are most comfortable in. This way, the Bicol novel becomes new. This is how we will proceed in enriching the Bicol languages. I don’t believe that a language dies, I think it just progresses and flourishes.”

Co-winner Jerome Hipolito echoed the same sentiment of pride that the literary contest brings: “Winning the First Valledor, more than anything else, is a challenge for me to further hone my craft and write more novels that tell stories of the Bikolnon. It is also an invitation to inspire budding writers to write novels about and in Bikol.”

Two other novels included in the shortlist were “Alunsina Kan Dagat” by Marvin Davila Aguino and “An Huring Panuga,” co-authored by Arthur Justine P. Alemania and Roxanne E. Berido.

The contest’s benefactor and namesake, Vic Valledor, is an insurance industry vanguard, business leader, philanthropist, Lockton Philippines president, and a true son of Bicol (tracing his roots in Catanduanes).

“The success of the first Premyo Valledor awards is proof that Bikol literature is truly vibrant and diverse,” Valledor pointed out. “There is really a need to encourage our local writers to embrace its richness by writing not just their grandparents’ and parents’ stories but their own narratives as well. This is how Bicol literature will flourish and continue in its heritage.”

The 2nd Premyo Valledor literary contest is accepting entries until January 2020, with the announcement of winners and awarding to be held in April. For more details, check https://www.facebook.com/adnupress/.

ASUS #OneDayofZen showcases the shooting prowess of the ZenFone 2 Laser 5.0

Tips on How to Clean and Maintain your Appliances at Home