Home > Tech > HUAWEI Listed on Forbes’ Most Valuable Brands of 2017, the Only Chinese Brand on the List

HUAWEI Listed on Forbes’ Most Valuable Brands of 2017, the Only Chinese Brand on the List


Forbes recently released its list of the Most Valuable Brands of 2017. HUAWEI ranked the 88th with a brand value of $7.3 billion, up by 9% year on year, and was the only Chinese brand who made it on the list.

Forbes selected 100 most valuable brands every year from a pool of over 200 international brands worldwide. This year, the top 100 on the list spread among 15 countries, with the United States taking the obvious lead with 56 spots, followed by Germany, France and Japan with 11, 7 and 6 spots respectively. 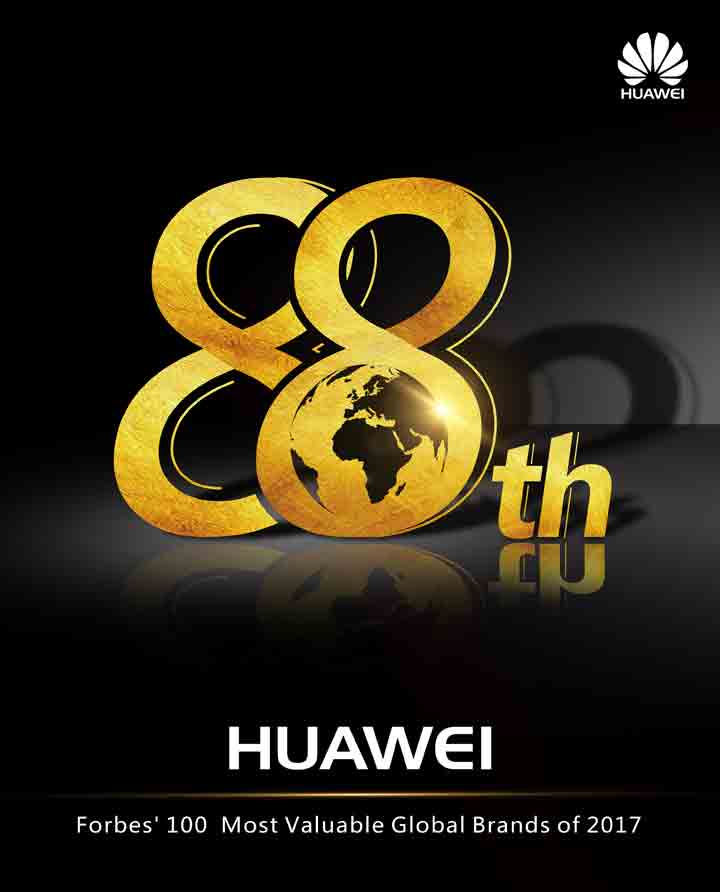 Technology is without a doubt the hottest industry of all, taking 18 spots of the list, and 9 out of the top 15 are technology companies. Apple, in particular, grabbed the first place for the 7 consecutive years. For other industries, the list saw 13 from the financial industry with American Express taking the highest ranking of its category, valued at $24.5 billion and ranked the 22nd. 12 consumer goods companies made the cut, and the first place of this category goes to Gillette, valued at $19.2 billion and ranked the 28th.

HUAWEI outperformed the industry in 2016 by making a vast lead, thanks to the recognition of the HUAWEI brand from consumers worldwide. The first quarter of 2017 saw this momentum continue as HUAWEI’s smartphone shipments grew steadily.

According to statistics from top research institutes like IDC, SA and Trendforce, HUAWEI smartphone shipments ranked 3rd globally and the 1st in China, ramming down its position in the top segment internationally. With the beautifully designed innovative flagship P and Mate series, HUAWEI witnessed growing influence in the primary segment of smartphones. HUAWEI P9/P9 Plus sold over 12 million units in the world, becoming its 1st flagship model selling over 10 million units. Its latest series, the P10 series, launched a new color with joint cooperation with PANTONE – Greenery, and was greeted with great enthusiasm from consumers worldwide.

On brand development, HUAWEI has also integrated top world-class marketing resources and kept innovation in marketing plans. After the launch of HUAWEI P10 series, HUAWEI partnered with the world’s most renowned fashion magazine VOGUE and launched a campaign to “reproduce iconic photos” with the P10 series, highlighting the Leica Portrait photo quality of HUAWEI P10 series. HUAWEI also partnered with Saatchi Gallery and unveiled a selfie exhibition called “From Selfie to Self Expression”, raising selfies to the new level of artistic expression. These exciting global events not only transmit HUAWEI’s brand concepts, but also connect to the lifestyle and emotion of consumers, creating a stronger emotional link to global consumers.

HUAWEI’s growing brand influence has been acknowledged by multiple renowned institutes in the world. Besides making Forbes’ list of the most valuable brands of 2017, HUAWEI was also selected into a few other well-accredited brand value lists.

In October 2016, HUAWEI made the list of Interbrand’s “Top 100” most valuable brands of the world and climbed to the 72nd place, the fastest climber in the technology industry. It was also selected into the “Global 500” ranking of the most valuable brands of 2017 and was ranked the 40th, moving up by 7 spots compared with the previous year.

Back To School, Back to the Battlefield - MSI Announces Back to School Promo

#GoogleMoLang campaign wants you to get better at Google Searching