Heineken®’s Spectre campaign invites consumers into the legendary world of James Bond. A new TVC starring Daniel Craig has been released globally and is available for viewing on http://heineken.com. The campaign in the Philippines will be supported by an exclusive movie premiere event on November 6, 2015 at SM Aura. 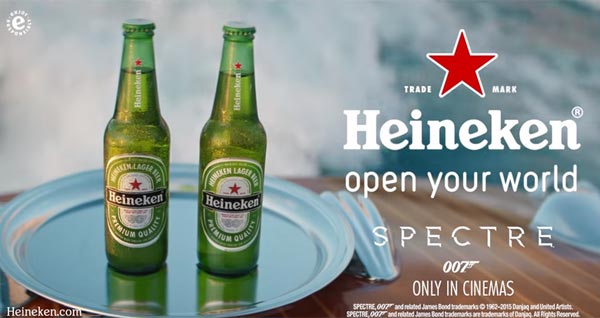 Fans of the film franchise will get a chance to open Bond’s world and attend the movie screening through a contest on Instagram and Twitter. The contest, #BondsWorld, will be ran by known personalities in the Philippines —individuals who have been the epitomes of living the legendary life– actress Maxene Magalona (@maxenemagalona) and Philippine Football National Team member Anton del Rosario (@anton_delro).

Mr. Cyril Charzat, Senior Director for Regional Marketing and Sales at HEINEKEN Asia Pacific, said, “Heineken® and James Bond have been worldwide partners since 1997, and we’re delighted to be continuing the relationship with Spectre. Partnering with the Bond franchise enables us to create exciting and cutting-edge integrated global marketing campaigns that bring value to both the film and the Heineken® brand everywhere in the world.”

Heineken® is an international premium lager and was first brewed in Amsterdam, the Netherlands in 1864. It has since expanded its footprint and is now enjoyed in 192 countries around the world. Heineken® is available in the Philippines at leading supermarkets, convenience stores and bars.

About Heineken® & Bond
This campaign celebrates the seventh film of the Heineken/Bond partnership, a relationship that began in 1997. Starting with ‘Tomorrow Never Dies’. Heineken was also involved in ‘The World is Not Enough’, ‘Die Another Day’, ‘Casino Royale’, ‘Quantum of Solace’ and 2012’s ‘Skyfall’.

About HEINEKEN
HEINEKEN is the world’s most international brewer. It is the leading developer and marketer of premium beer and cider brands. Led by the Heineken® brand, the Group has a powerful portfolio of more than 250 international, regional, local and specialty beers and ciders. We are committed to innovation, long-term brand investment, disciplined sales execution and focused cost management. Through “Brewing a Better World”, sustainability is embedded in the business and delivers value for all stakeholders. HEINEKEN has a well-balanced geographic footprint with leadership positions in both developed and developing markets. We employ 81,000 people and operate more than 160 breweries in 70 countries. Heineken N.V. and Heineken Holding N.V. shares trade on the Euronext in Amsterdam. Prices for the ordinary shares may be accessed on Bloomberg under the symbols HEIA NA and HEIO NA and on Reuters under HEIN.AS and HEIO.AS. HEINEKEN has two sponsored level 1 American Depositary Receipt (ADR) programmes: Heineken N.V. (OTCQX: HEINY) and Heineken Holding N.V. (OTCQX: HKHHY). Most recent information is available on HEINEKEN’s website: www.theHEINEKENcompany.com and follow us via @HEINEKENCorp.

About EON
EON Productions Limited and Danjaq LLC are wholly owned and controlled by the Broccoli/Wilson family. Danjaq is the US based company that co-owns, with Metro-Goldwyn-Mayer Studios, the copyright in the existing James Bond films and controls the right to produce future James Bond films as well as all worldwide merchandising. EON Productions, an affiliate of Danjaq, is the UK based production company which makes the James Bond films. The 007 franchise is the longest running in film history with twenty-three films produced since 1962. Michael G Wilson and Barbara Broccoli succeeded Albert R ‘Cubby’ Broccoli and have produced some of the most successful Bond films ever including CASINO ROYALE, QUANTUM OF SOLACE and SKYFALL. The 24th film, SPECTRE, is currently in post-production.

About METRO-GOLDWYN-MAYER
Metro-Goldwyn-Mayer is a leading entertainment company focused on the production and global distribution of film and television content. The company owns one of the world’s deepest libraries of premium film and television content. In addition, MGM has investments in domestic and international television channels and is the majority owner of and distributor for United Artists Media Group (UAMG). For more information, visit www.mgm.com.

Schneider Electric on Integrating with IoT in the Philippines