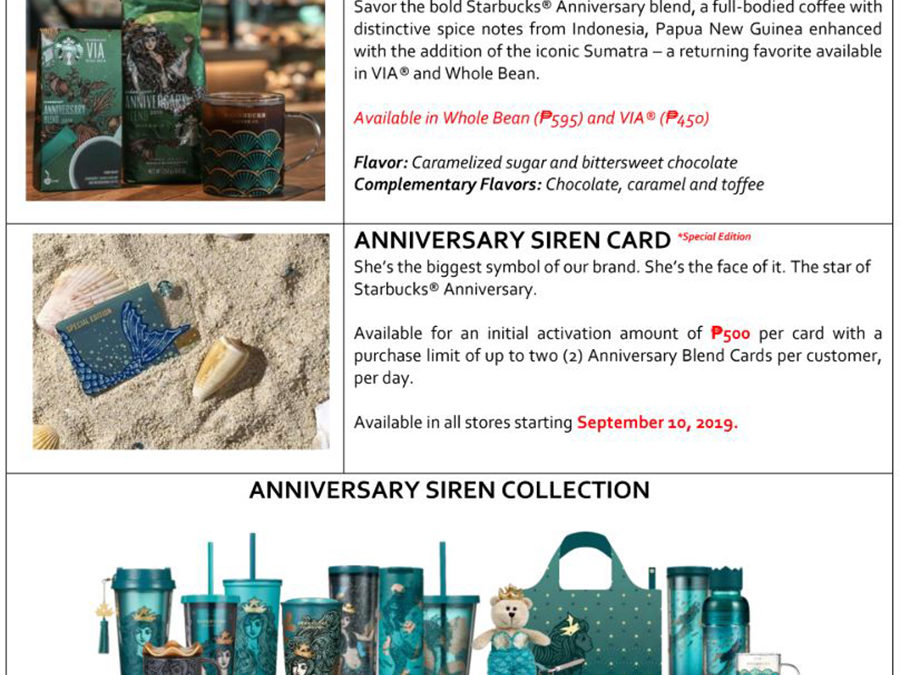 Heed the Siren’s Call With the Mystical Starbucks Anniversary Collection

With seafaring folklore as her origin, the iconic Starbucks Siren is not a far cry from the legend. In her own way, the enigmatic beauty continues to call on those with a passion for quality coffee.

An annual tradition continues as the Starbucks Anniversary Blend returns with its bold and full-bodied coffee flavor and distinctive spice notes. Made with the finest blend of beans from Indonesia, Papua New Guinea, and enhanced with the addition of the iconic Sumatra, this favorite will be available in VIA® and Whole Bean. This year, the Starbucks Anniversary Blend will feature a fresh interpretation of the siren on its packaging.

Celebrating the brand and its muse is the mystical Starbucks Anniversary collection, featuring design and illustrations of aquatic elements in turquoise blue, gold, and silver accents. With items including mugs, tumblers, and an adorable Starbucks Bearista siren, the collection showcases the ethereal beauty of the Siren.

Complete the set of the celestial muse of the sea with the Starbucks Anniversary Card which depicts the siren’s tail in varying shades of blue. The card will be available for an initial activation amount of ₱500 per card.

For Starbucks’ Anniversary, heed the Siren’s call and dive deep into your coffee passions with the brand’s exciting offerings!