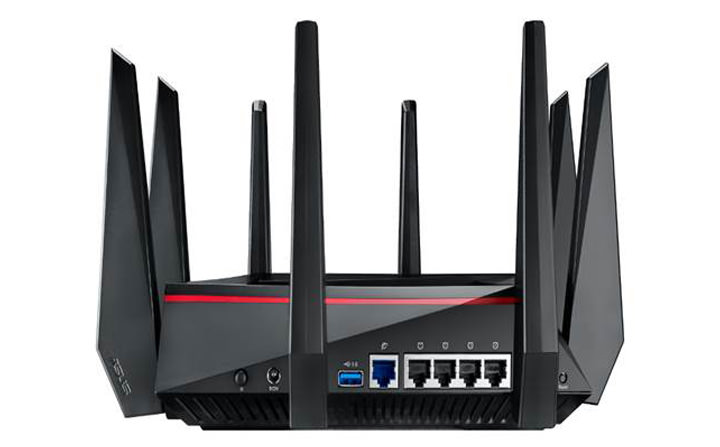 The stunning better-than-wired speeds of RT-AC5300 will be a boon to any gamer needing the freedom and convenience of Wi-Fi, with the reliability and performance normally associated with a wired network.

Increasingly, the available wireless bandwidth in a household has to be shared between a large number of Wi-Fi-enabled devices, including laptops, smartphones, tablets, smart TVs and smart home devices. To provide additional bandwidth for these multi-device households, RT-AC5300 uses a tri-band AC5300-class design, with two independent 5GHz frequency bands and one 2.4GHz frequency band.

Broadcom NitroQAM technology boosts the maximum speed of each 5GHz frequency band from the standard 1734Mbit/s to a blistering 2167Mbit/s, and on the 2.4GHz frequency band speeds are increased speeds from 800Mbit/s to 1000Mbit/s for a world-leading combined throughput of 5334Mbit/s — over five times (5X) the bandwidth of a wired Gigabit Ethernet connection. This extreme bandwidth means that the advanced RT-AC5300 provides users with more than enough capacity to deliver low-latency online gaming, smooth streaming of 4K/UHD videos and ultra-fast file sharing to all connected devices.

Enhanced coverage, for every device, everywhere!

GPN can reduce average game ping times by 30-60%, lower average speed deviations by 70-90%, and cut bad router hops by 70-90%. By routing gaming data packets automatically via the most efficient internet route, packet loss is reduced, ensuring a responsive and frustration-free gaming experience. GPN supports virtually all competitive multi-player online games, and has optimized settings for many of the most popular titles.

The game accelerator is integrated into RT-AC88U’s easy-to-use ASUSWRT graphical user interface, so it consumes no system resources on the game device. This also means that the benefits can be experienced on any gaming platform — including Windows, Mac OS, Linux and game consoles — regardless of the manufacturer or operating system.

Advanced technologies for enhanced speed, reliability and ease of use

ASUS RT-AC5300 features many state-of-the-art technologies to enhance performance and improve stability even on the busiest networks.

Tri-Band Smart Connect technology intelligently selects the optimum frequency band for each device, based on the device’s speed, its signal strength, and how busy each band is. This means users never have to decide which band to use, as RT-AC5300 does it all automatically. The result is better range and faster, more reliable connections — all the time!

For advanced users, Link Aggregation (802.3ad) support provides a way of combining two of the Gigabit Ethernet LAN ports into a single ultra-fast 2Gbit/s wired connection (using two network cables). This feature, normally only found on professional-grade network switches, will be of particular interest to users with high-speed network-attached storage (NAS) devices, which increasingly offer 802.3ad support. This means that users can fully exploit the capabilities of the latest NAS devices, for fast device backups and file sharing.

Win a trip to Hollywood for the Ghostbusters World Premiere!

Lenovo VIBE Shot Gives Consumers the Best of Both Worlds, to Launch with Lazada on July 31