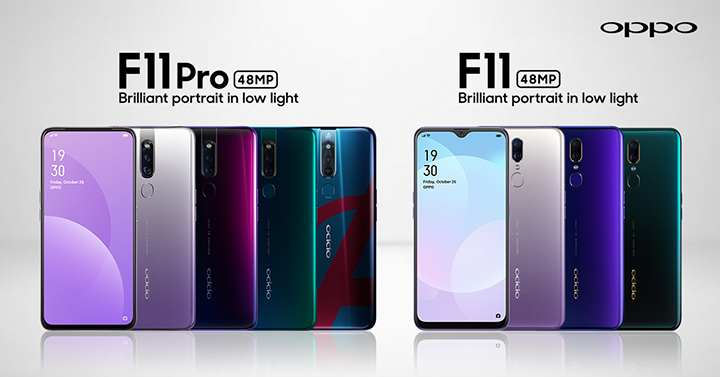 As part of OPPO’s 5th Anniversary in the Philippines, the brand unveiled new limited edition colors – F11 Pro in Waterfall Gray and F11 in Jewelry White. Consumers can enjoy the F11’s top-notch features for only P15,990, while the F11 Pro with 128 GB ROM capacity retails at P18,990. Both limited edition smartphones will officially be available starting May 25 at OPPO stores and Lazada, until their extremely limited stocks last. Customers availing the F11 Pro through Home Credit can enjoy 0% interest with 9 or 12 months to pay term. Meanwhile, those availing F11 can also enjoy 0% interest, with a 6 or 9 months to pay term.

The most powerful Oppo F Series to date

The best and most powerful of OPPO’s iconic F series are here – the F11 Pro, the F11, and the F11 Pro Marvel’s Avengers Limited Edition.

The OPPO F11 series gives users some of the most irresistible powerful features you can find in the market. Touting impressive 48MP+5MP dual rear cameras with a 6P lens and an F1.79 aperture, the F11 series perfects the art of capturing low-light photos giving you the most brilliant and crisp images ever. Another feature to love is the VOOC 3.0 fast-charging feature, which completes a full charge in just 80 minutes. While they have all these features in common, each OPPO F11 series smartphone offers something unique.

The OPPO F11 Pro comes with a series of its own. The line features a hidden front rising camera module allowing for a full screen display, low-power MediaTek Helio P70 and ram-equipped display. It is also equipped with a flash charging technology that is 20% faster than previous VOOC generation and a Hyper Boost technology which is OPPO’s independently developed performance acceleration engine that’s built for gamers.

For all the Avengers fans, OPPO has also sealed an exclusive smartphone partnership with Marvel Studios for the F11 Pro Marvel’s Avengers Limited Edition to commemorate the blockbuster hit. It comes with a Captain America-inspired back cover to go with the sleek and shiny blue and red exterior. To complete the collector’s item, the limited-edition smartphone comes with an exquisitely crafted stamped badge.

The OPPO F series has something to offer to every kind of personality. But if you’re looking for something special, don’t miss out on the 5th Anniversary limited edition offerings F11 Pro in Waterfall Gray and F11 Jewelry White. Both will officially be available starting May 25 in very limited quantities! Customers can get their hands on these special smartphones in OPPO stores and via online in Lazada.

Pia Wurtzbach Joins the Jollibee Family as Its Newest Endorser

Celebrate Christmas by Giving Philips Gifts for Him and Her